Warning: Creating default object from empty value in /home/customer/www/ufluidix.com/public_html/circle/wp-content/themes/salient/nectar/redux-framework/ReduxCore/inc/class.redux_filesystem.php on line 29
 Applications of inertial microfluidic focusing (with the focus on commercial products ) 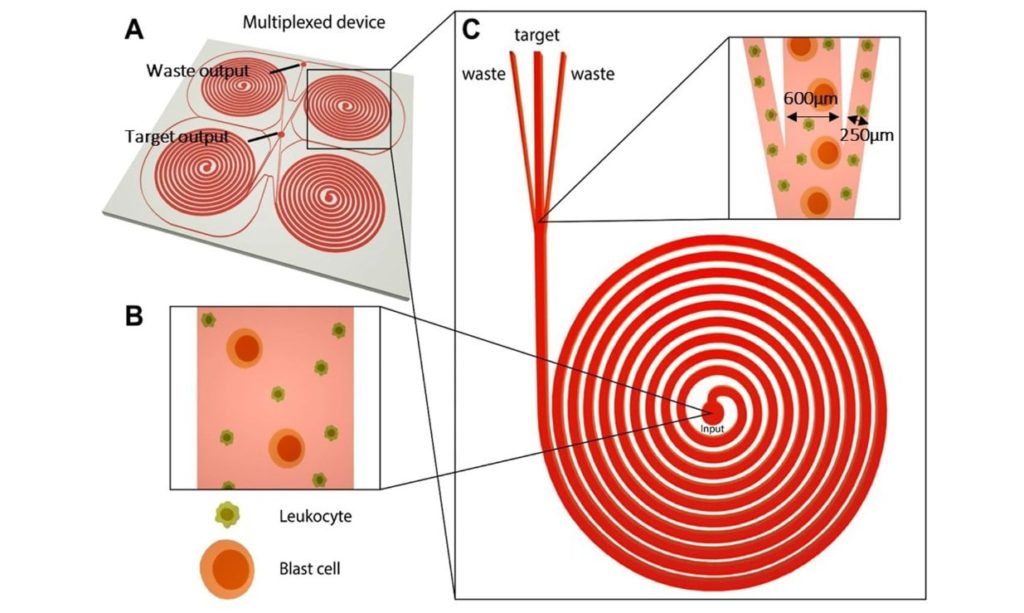 Applications of inertial microfluidic focusing (with the focus on commercial products )

“Sorting”, “lift force”, “serpentine microchannel”, all these words reminds us of inertial microfluidic focusing. Its physical principles are relatively straightforward. If a suspension of microparticles enters a spiral microchannel, microparticles will be located across the channel after a short time. This single equilibrium position is the result of the balance between two opposing forces; Dean rotational force and the wall lift force. Dean rotational force is due to the curvature of the channel. For example, when you are in a car while turning a corner, you feel a force which pushes you away from the centre of the turning point. It is the Dean rotational force. In another scenario, If you are in a water pool and move your hand gently toward the pool wall, you might feel the wall pushes your hand back. It is the wall lift force. This single equilibrium position is directly proportional to the size of the microparticle. Therefore if the suspension comprises of the microparticle of different sizes, it will be divide into several streams of the same size microparticles in the spiral microchannel after a long enough distance. The individual microparticle streams can be collected with an appropriately designed outlet system.

The most obvious application for these inertially focused microfluidic devices is for cell sorting or cell isolation, and the heart of these devices is one or several spiral channels. Working with a small sample volume is their most significant advantage. The other benefit is the high throughput analysis. My colleagues and I used a cascaded microfluidic device consisting of two spiral channels and one zigzag channel, for the continuous, fast, and high-throughput size-based isolation of cancer tumor cells (CTC) from blood cells. The platform simultaneously separates four different types of cells, namely, human lung cancer cells (A549), human breast cancer cells (MCF-7), red blood cells (RBCs), and white blood cells (WBCs) based on their size differences.

Often only a more particle-enriched solution is desired, rather than full particle separation, when performing a particular experiment. For example, in patients with leukaemia, blood biopsy cannot be used because the counts of leukaemia blast cells in the blood is very low. By using a cascade of four spirals, an enriched sample of blast cells has been obtained, while red blood cells and healthy white blood cells were directed to the waste reservoir.

Although blood biopsy for leukaemia patients, which usually need a bone marrow biopsy, might be less invasive, in general, taking blood is categorized as intrusive. Therefore using a urine sample to detect prostate cancer is more compatible with the comfort of the patients. That is the reason that a group of researchers have developed a one spiral microfluidic chip capable of isolating prostate cancer cells from the urine.

These devices, alongside other microfluidic devices, can easily find a place in point-of-care applications.

However, inertial microfluidic focusing devices can have other interesting applications. For example, they have been used to separate and purify Tetraselmis suecica (lipid-rich microalgae) cultures from Phaeodactylum tricornutum (invasive diatom). Using the same device and in a similar study, yeasts (Saccharomyces pastorianus and Saccharomyces cerevisiae) have been separated from beer spoilage microorganisms (Lactobacillus brevis and Pediococcus damnosus).

As it is clear from these examples, Inertial microfluidic focusing devices have presented a high potential for high throughput, low cost and time-saving applications.  However, the fluid dynamics is not as simple as it is outlined earlier here. Many other parameters such as fluid density, particles elasticity, centrifugal forces, microparticles density, etc can add to the complexity of the system. Therefore finding the streams of individual microparticles and designing the outlet system will become cumbersome.

Azar is a research fellow in the School of Metallurgy and Materials, University of Birmingham (UK). She received her PhD from the University of Lille (France). During her PhD and postdoc research, she has used microfluidic devices for a wide range of applications. Her publications are available here. In her free time, you might find her hiking or trail walking.