Warning: Creating default object from empty value in /home/customer/www/ufluidix.com/public_html/circle/wp-content/themes/salient/nectar/redux-framework/ReduxCore/inc/class.redux_filesystem.php on line 29
 Bridging the micro to the nanoscale - how to facilitate the transition to nanofluidic devices as new standard in life sciences

One of the greatest challenges of the 21st century encountered by the health care sector is neurodegenerative diseases such as Alzheimer’s, Parkinson’s and Huntington’s disease – so called protein misfolding diseases. The immense cost of care for the infected elderly imposes a dramatic burden on

health care systems all over the world. To study the inducing mechanisms and detect early onset of the disease, microfluidic chips are commonly found in industry, university laboratories as well as clinics. There, they are used to filter and detect the involved proteins and biomarkers in order to analyze these from a biophysical point of view in a controllable lab-on-chip environment.

From micro-total-analysis-system (MTAS) to neurons-on-chip – the application range is broad and has given major new insights into the spread of the disease on a patient level as well as on a molecular scale. Most important findings were, that the size of the protein aggregates found in patients and in in-vitro assays is related to their toxicity. Especially the larger aggregated protein assemblies (oligomers) are considered as the damage causing species as described in an interview with the biotech company Fluidic Analytics1.

This fact is the main driver in the research field for the development of protein sizing technologies of higher precision and specificity. In particular – since a single misfolded protein can corrupt others and spread the disease – we, therefore, seek methods to detect these specimens on a single-molecule level. Microfluidics has provided powerful tools for protein misfolding disease research: Microdroplet devices, diffusional sizing devices and electrophoresis-on-chip have proven invaluable for the study of protein aggregates (See Fig.1 A-C). However, to truly reach MTAS and analyze protein solutions on the single-molecule level, the nanofluidic regime opens up a totally new set of applications which are challenging to achieve or not possible at all with conventional microfluidics. 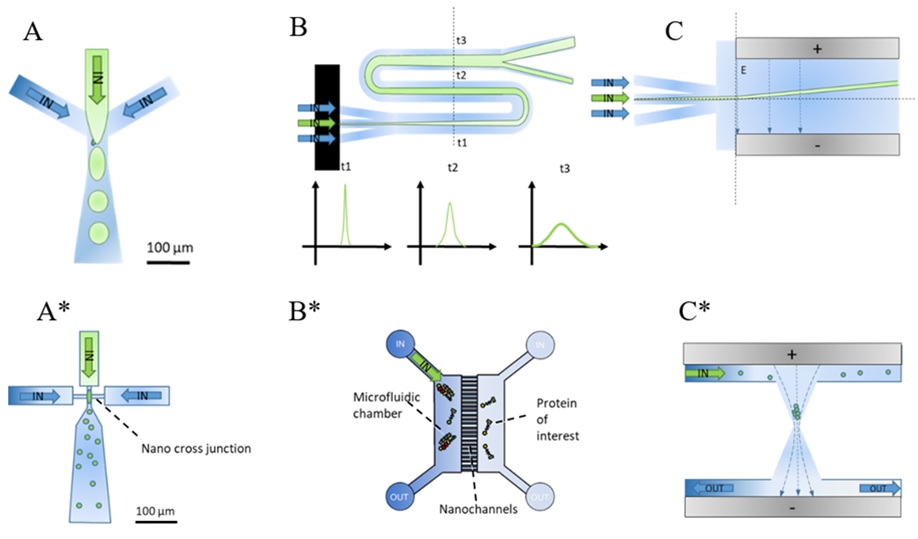 Fig. 1: Illustration of micro-, and nanofluidic chip designs used in protein misfolding disease research (A) Microdroplet generators are used to separate single cells (FACS) or confine protein into independent experiments in micron-sized droplets; (B) Diffusional-sizing devices use the spread of a sample injected in the centre of a microfluidics channel and its developing diffusion profile to estimate its hydrodynamic radius; (C) Electrophoresis on chip allows to measure the charge of molecules flowing through a perpendicular applied electric field; (A*) Smaller channel cross-sections allow the generation of nanodroplets; (B*) Diffusional sizing can be facilitated by observing single molecules diffusing in nanochannels between two reservoirs. If channels widths reach the size of proteins also filtration becomes possible; (C*) Electrophoretic trapping in nanofunnels can be used to concentrate and capture charged molecules in solution (e.g. DNA);

The new chip designs that arise from smaller channel widths are similar to microfluidic chip layouts but allow to significantly decrease the needed sample concentrations to the femtomolar range and the usage of new physics by reaching the nanoscale (See Fig.1 (A*)-(C*)). Nanodroplet maker chips (A*) produce even smaller independent nanoreactors for massive parallelization of drug testing or drug encapsulation. Nanochannels (B*) in between two microfluidic reservoirs can be used to measure single proteins in solution as they propagate from one reservoir to the other. This allows to measure the sizes of protein monomers (approx. 0.5 nm) up to macromolecular assemblies such as oligomers (2-10 nm), exosomes (40-100 nm) or viruses (80-120 nm) in solution, without permanent surface immobilization and a relatively simple chip design. Nanofunnels (C*) concentrate charged proteins and short stranded DNA (e.g. µDNA) in solution by application of an electric field, which facilitates an easier detection of these with optical setups. Especially for the analysis of protein solutions, nanochannels have the major advantage of eased experimental setup and conduction of experiments. Microfluidic diffusional sizing devices need external machinery such as multiple-precision syringe pumps, optical microscopes, high-voltage power supplies and standardized flow measurement protocols to allow for reliable protein sizing measurements. With a nanochannel device, a single 50 µl injection manually pipetted into a chip mounted on top of a commercial microscope can be used to evaluate e.g. antibody binding events with the highest precision at femtomolar concentrations. This decreases the total sample consumption by orders of magnitude, increases throughput and eases the training of staff for conduction of single-molecule experiments drastically. However, the availability of nanofluidic devices is currently limited to research laboratories and companies2 with expensive clean-room facilities or researchers with expertise in nanofabrication3– where high prototyping costs put additional constraints.

A way to circumvent this matter is soft lithography4, which allows a cost-effective fabrication of disposable nanofluidic devices from a single master wafer. Recently, we demonstrated the scalable integration of nanofluidic functionalities into existing microfluidic designs using two-photon lithography as an effective alternative fabrication method in comparison to conventional electron beam lithography5. Commercial 2-photon lithography systems (e.g. Nanoscribe’s Quantum X and Photonic Professional GT2) are available and provide a sophisticated way to produce nanofluidic master wafers, but open-source systems can also be found in the community, and provide an even more cost-effective nanolithography solution for master fabrication and soft lithographic chip imprinting without cleanroom facilities.

Commercialization potential in nanofluidics, therefore, lies within three sectors: Firstly, in the application of nanofluidic devices for biotechnological diagnostics and antibody development e.g. antibody testing to specific targets such as viruses, exosomes or protein complexes in solution at minimal sample consumption. Secondly, in the cost-effective fabrication and distribution of nanofluidic devices tailored to customer’s needs using fast and flexible fabrication techniques and thirdly in the key-knowledge transfer of chip architecture and physical effects happening on the nanoscale (similar to PCB design parameters known from the electronics industry) which can be exchanged by consulting services. However, for all of this to be economically relevant, the fabrication and prototyping need to be realized in a cheap and scalable manner without expensive cleanroom facility maintenance costs and at faster design-to-device delivery times than conventional chip industry allows. The combination of two-photon lithography with soft lithography, therefore, provides an effective integration of nanofluidics into existing microfluidic designs and paves the way for a broad implementation of nanofluidic chips for various applications related to neurodegenerative disease research and cancer diagnostics.

Oliver Vanderpoorten is part of the Centre for Misfolding Disease at the University of Cambridge where he conducts research on nanolithography and nanoscopy methods. He holds two master degrees in engineering subjects which give him an applied attitude towards biotechnological applications: He holds a Master in Electrical and Microsystems Engineering from OTH Regensburg (2015) and a second Master’s degree in Sensor Technologies from the University of Cambridge (2016). During his PhD in the EPSRC funded Sensor CDT he explored the landscape of nanofluidic chips for various applications related to life sciences and protein misfolding diseases and developed 2-photon lithography as fabrication method for nanofluidic devices. In his free time he’s interested in entrepreneurship, sailing, painting and spends his time with outreach to explain science to the public in an informal way (https://youtu.be/TPJPYvumErM?t=100).