Warning: Creating default object from empty value in /home/customer/www/ufluidix.com/public_html/circle/wp-content/themes/salient/nectar/redux-framework/ReduxCore/inc/class.redux_filesystem.php on line 29
 Microfluidics and the Drug Discovery Pipeline - The MicroFluidic Circle

Microfluidics and the Drug Discovery Pipeline

From antibiotics to antihistamines, every reader has at some point benefited from the range and power of modern medicines. But the cost of drug development is a bitter pill to swallow. Did you know, on average, it takes around 12 years and over £1bn to develop each new medicine1? 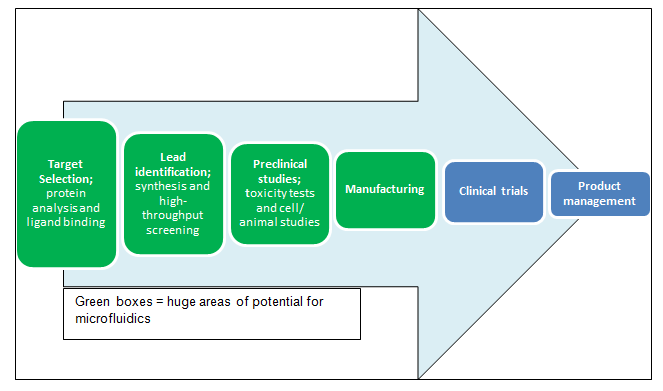 There are two ways a potential medicine can fall out of the drug development pipeline. It can simply fail to work in a human body (inefficiency), or it can cause unacceptable side effects (toxicity). Scientists want to find out which medicines are inefficient or toxic early on in the pipeline. This may be in a petri dish full of cells, or simply a vial of liquid, where the potential medicine (also called a ‘lead’) is mixed with its biological ‘target’.This test-tube stage is called in vitro (testing in live animals is called in vivo). In vitro is the first step where microfluidics comes in.

What is a microfluidic chip?

Microfluidic chips (‘microchips’) are tiny platforms containing channel systems, designed to handle volumes of liquid smaller than a microlitre. Depending on the design, they can filter, concentrate, mix, heat, separate, and detect. There are many ways to make a microchip, but typically it requires laboratory-grade facilities and equipment. In universities, many microchips are made out of the polymer PDMS, but this is quite difficult to mass-produce. One alternative is paper microchips, as pioneered by the celebrated chemist George Whitesides. Another, yet to be fully explored, is 3D printed microchips.

Initially, microchips were designed in order to increase efficiency and reduce waste by using smaller reaction volumes. Furthermore, their low cost and ease of automation make them attractive commercially. However, it was quickly realized that miniaturization can expand the capability of existing bioassays, as well as chemical synthesis technology. Scaling down the size will dramatically alter the surface to volume ratio, and molecular diffusion. The result? You can do more reactions, faster. This high-throughput technology is one of the holy grails for medicine discovery.

The number of potentially medicinal molecules is estimated to be of the order of 1063– a.k.a. one vigintillion2. Synthesizing and screening candidate molecules using macroscale methods is time-consuming and expensive. Microfluidics can offer significant improvements. One example is where researchers used a micro-reactor to synthesize a dipeptide with high yield in 20 minutes, a huge improvement on the previous 24hr, 50% yield macro-reactor3.

Microchips for screening medicines in vitro

Not only can microchips be used to synthesize potential medicine molecules; but also to test how these chemical molecules bind to biological targets. For example, a high-throughput microfluidic platform was developed to test the binding of transcription factors to DNA, successfully predicting in vivo functionality4. In another interesting example, herbal medicines (a multi-billion dollar market) were tested as antidepressants on electrode microchips5.

An innovative combination of both synthesis and screening was developed earlier this year, which synthesized metal complexes and then tested how they bound to folded DNA structures called telomeres6. The entire process was carried out on a single microfluidic platform.

Microchips for testing medicines on cells

Testing compounds on live cells is a key step in the drug discovery pipeline, but this requires physiological conditions that are as close to the living body as possible. With microfluidics, you can manipulate cells or volumes of cellular size; and you can look at huge numbers simultaneously. For example, PDMS microchips have been used to study antibiotics passing through bacterial membranes7.

A microchip has also been developed to administer repeat, tiny doses of bradykinin(an inflammatory mediator) to neuronal cells8. This mimics a biological synapse – on a chip. Indeed, a growing number of studies are using microfluidic platforms to monitor the long-term effects of drugs on cells, effectively building artificial blood vessels, nerves, and muscles. In the future, such devices have the potential to replace animal testing9. Such work blurs the lines between the scientific terms ‘in vitro’, and ‘in vivo’.

In the early stages of the drug delivery pipeline, such as chemical synthesis, screening of molecules, and preclinical testing of drugs in living cells, microfluidic platforms clearly offer a not-so-small improvement on existing technologies. However, ask any microfluidics researcher (myself included!) and they will tell you that various limitations must first be overcome. These include standardizing materials and geometry of the microfluidic channels, as well as studying long-term microchip performance. Mass-production of microchips also needs to take off in order to help the next generation of industrial medical researchers in their mission to shorten and streamline the drug development pipeline.

Isobel Steer is a Ph.D. researcher in the Bioengineering and Chemistry Departments of Imperial College London, working to develop optical microfluidic devices. She also writes for BioNews and tweets as @isosteer.