Warning: Creating default object from empty value in /home/customer/www/ufluidix.com/public_html/circle/wp-content/themes/salient/nectar/redux-framework/ReduxCore/inc/class.redux_filesystem.php on line 29
 Organ on Chips: Questions to Address Before They Can Move Into Mainstream Applications

Organ on Chips: Questions to Address Before They Can Move Into Mainstream Applications

Microfluidics for cell culture applications has seen tremendous growth in the last 20 years. In the quest for greater physiological relevance, microfluidic 2D cell cultures gave way to 3D cell cultures which eventually led to organ on chips (OOC’s), also known as microphysiological systems (MPS) or tissue chips1.  As the name implies, such systems aim to recapitulate organ-level function by recreating functional units of organ systems using a microfluidic device or platform that enables the following: 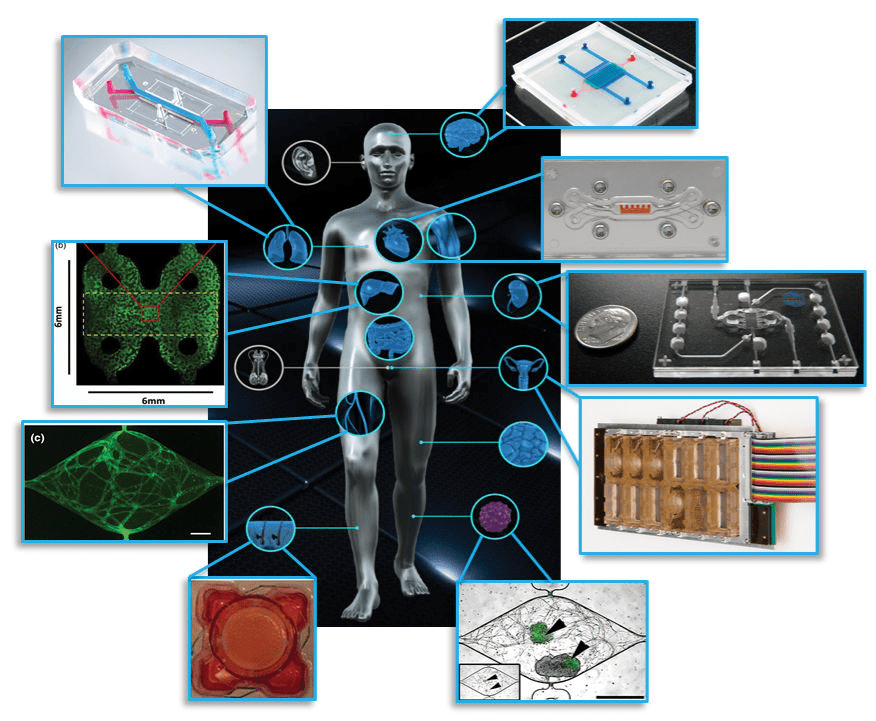 Various organ systems have been modelled via OOC’s using these principles (refer Figure 1) and have been covered in-depth elsewhere3. OOC platforms provide greater insight into fundamental organ biology and can model how diseases develop and progress, leading to improved therapeutics and treatment strategies1. The potential applications of OOC’s in basic, translational, and clinical research including regenerative medicine and personalized medicine4 has spurred great interest from researchers and funding agencies5.  Meanwhile, the positioning of OOC’s as improved pre-clinical testing platforms that can augment existing animal models and eventually replace them has caught the attention of pharmaceutical companies and regulatory bodies6.

The current gold standard for pre-clinal testing has been animal models, for which there exists many decades worth of data to fall back on.  While no one will argue that animal models are ideal, they are still the best method currently available for pre-clinical testing, short of testing on humans.  This lack of a better model is what helped drive research into microfluidic 3D cell cultures and OOC’s forward as an alternative to animal testing.  The biggest argument for OOC’s over animal models (besides the major ethical debate over breeding animals solely for sacrificing in drug tests) is that they use human cells and model human organ function – factors that should make them a better predictive model than animals. However, since OOC’s are so new and unproven (with the kind of rigour that pharma and regulatory bodies expect), there is a fair amount of healthy skepticism that must be overcome. Some of the big questions being asked by pharmaceutical companies with regards to OOC’s are:

The above questions are not trivial, and many ongoing discussions between academics, regulatory bodies, and industry are already taking place to address these issues6,7. The remainder of this article looks only at the first point raised: the transferability and scalability of OOC’s. This might at first glance appear to be a simple logistical problem; however, the complexity of OOC’s turns this into a much more complicated issue.

OOC-based experiments in academic labs are done at a low scale with most labs running 8 – 20 OOC’s in parallel at any given time. Thus, each OOC receives significant attention every step of the way from highly specialized personnel who can take preventive steps at the first sign of trouble if needed. Given the relatively small number of replicates and the proof of concept nature of the work, entire experiments can be repeated if significant issues arise. However, in highly regulated healthcare environments, for results to be accepted as valid, significant confidence must be established in the testing platform’s ability to provide repeatable, reproducible and consistent results with many replicates.  Repeating entire batches of experiments or devoting excessive resources to maintain and monitor each individual OOC does not become feasible in such situations.  For OOC’s to move into the mainstream as a standardized tool, they will have to become more “plug and play” – easy to set up in large numbers and maintain without requiring troubleshooting at every step of the way.  Bottlenecks that can get in the way of scaling up OOC platforms can arise from:

While the above points do not capture the entire range of issues with scaling up OOC’s, they do highlight some of the initial steps to be considered.  The field of OOC’s is one that is continuing to grow and evolve at a rapid pace.  However, it is still important to examine how end-users use and deploy OOC’s in their venues to then draw insights into remaining questions related to ease of use, practicality, and context of use.  For this to occur, OOC’s need to be scaled up and translated from academic labs to end-user settings.  Ultimately, the OOC that gets adopted might not be the one that is the most advanced, but the one that can be easily set up and replicated while still providing compelling organ-like data.

Subin George has a decade of biomedical research experience spanning digital microfluidics for 3D cell culture, liver microphyiological systems, and implantable sensors for non-invasive continuous monitoring of oxygen, glucose and lactate. In the process, he acquired significant inter-disciplinary experience and enjoys working with research professionals from various technical backgrounds. His current interests lie in translating biomedical research from proof of concept settings to real-world applications. Apart from research, he enjoys spending time with his wife and daughter, catching up with technology, cooking, hiking, and playing soccer.