Warning: Creating default object from empty value in /home/customer/www/ufluidix.com/public_html/circle/wp-content/themes/salient/nectar/redux-framework/ReduxCore/inc/class.redux_filesystem.php on line 29
 Personalizing Medicine with the Organ-on-a-Chip Technology: Where Do We Stand?

Personalizing Medicine with the Organ-on-a-Chip Technology: Where Do We Stand?

Creating a miniaturized copy of yourself may sound crazy a decade ago, but not that much anymore – it is gradually realized by the organ-on-a-chip technology, little by little.

Imagine you get sick, you go to the doctor, who prescribes a medicine to you, most often empirically. You return to home, take the medicine, and heal. Or sometimes symptoms continue, or occasionally worsen. What do you do? You return to the doctor, complaining that the medicine does not work, and then receive another set of medicine, again very likely, by empiricism. The second medicine may heal you, or if unlucky, you may need to repeat this process for a few additional rounds prior to final recovery. Who knows. This scenario perhaps sounds familiar to most people, because it is how today’s medicine is practiced. A step forward, if the illness is much more serious than just a cold, modern technology may start to come into the play of its treatment. For example, patients with cancer typically receive molecular and genetic profiling to identify mutations, which are subsequently used to determine the class of drugs to prescribe. However, a biomarker often does not translate into a successful clinical response to the selected therapy. In a well-known case, cancer patients with wild-type KRAS protein are treated with Cetuximab, but only about 3 in 10 will ever respond to the drug, while the rest, unfortunately, instead of being cured, suffer side effects without noticeable benefits. 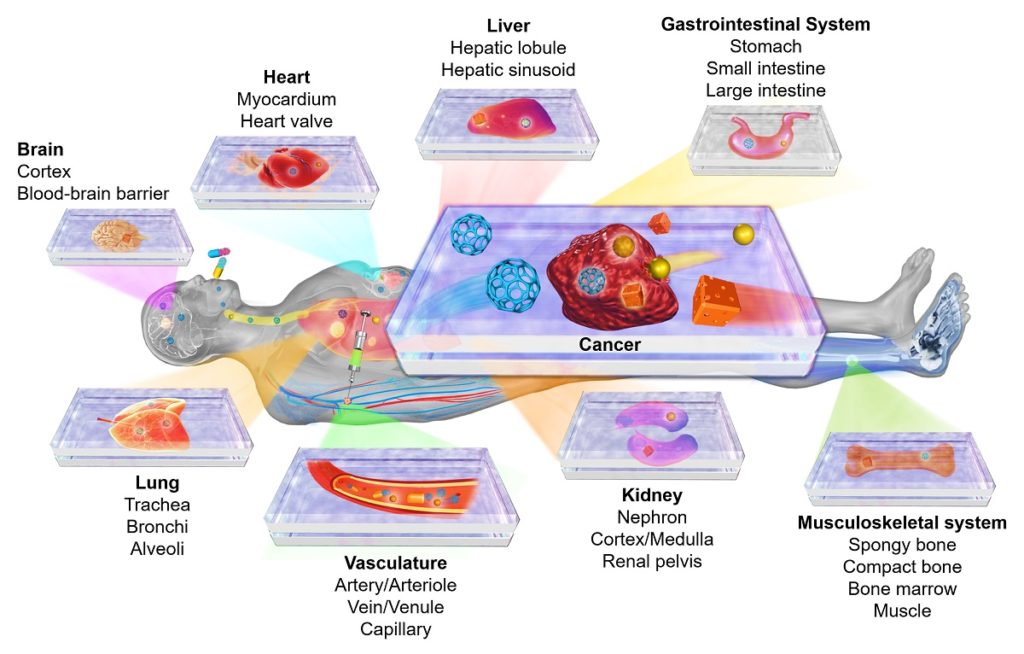 The reality is that, even when two patients are diagnosed with the same disease, the behaviors of their respective phenotypes remain quite diversified, making each individual’s disease one of its own kind. To this end, the organ-on-a-chip technology, featuring miniaturized units of functional tissues or organs, may bring us true precision medicine, by allowing screening of drugs or drug combinations in a personalized manner before the most effective options applied to one’s own self 1. A small-scale microfluidic chip can be designed to integrate various biomimetic cues, including those of biophysical and biochemical in nature, in addition to the tissue/organ models hosted within, which may derive from the patient’ cells – or sometimes simply a piece of patient’s explanted tissue. When multiple chips each containing a different tissue/organ model are interconnected into a compartmentalized system, the multi-tissue-drug interactions may further be picked up, to better predict how the drug is exerting effects on the patient as an organism.

With all the best hopes, this may still sound too futuristic to be true. Indeed, many challenges remain before an organ-on-a-chip system generated according to a patient’s own traits can be treated as an equivalent of that patient, which he/she can rely all decision of drug selection on. Currently, the field is lacking validations of these platforms – a few studies have shown a preliminary correlation of drug results from chips with those observed in human patients 2 3. Nevertheless, there are way more chip designs reported in the literature that have never been shown for their predictive power. Most probable failure could well lie in the inaccurate scaling of the organoids with their human counterparts, leading to biased pharmacokinetics and pharmacodynamics during screening 4. Besides, ergonomics can be the key to the translation of the organ-on-a-chip platforms to the clinics – they have to be sufficiently sophisticated to model tissue/organ functions while operationally simple enough for them to be adopted by non-expert end-users, such as clinicians. Eventually, it is standardization of these platforms that will facilitate their widespread applications at the bedside, through large-scale industrial production. To this end, the Tissue Chip Testing Centers recently instated by the United States National Institutes of Health 5 certainly represent a fair start towards the goals of both chip validation and standardization. There is perhaps no doubt that the organ-on-a-chip technology will land successfully in materializing personalized medicine, just how long this “journey to the west” takes.

Shrike Zhang currently holds a faculty position in the Division of Engineering in Medicine at Brigham and Women's Hospital, Harvard Medical School. His research is focused on innovating medical engineering technologies to recreate functional biomimetic tissues and their models, spanning from organ-on-a-chip, 3D bioprinting, and bioanalysis to regenerative engineering and nanomedicine. In collaboration with a multidisciplinary team, his laboratory seeks to ultimately translate these cutting-edge technologies into the clinics. Dr. Zhang is the author of more than 110 peer-reviewed publications. His scientific contributions have been recognized by >30 international, national, and regional awards. He is serving as Editor-in-Chief for Microphysiological Systems, and is also on Editorial Board of Bioprinting.