When my friends and family ask about my research, and I reply ‘microfluidics’, they always look confused and say, ‘Okay, what is that?’ This is not surprising since I didn’t know the word three years ago. The general public knows about scientific research in certain areas, like cancer, global warming, artificial intelligence and virtual reality. They either are problems we consider important or have applications we can relate to. But in the case of microfluidics, a distinct ‘feature’ is that its fame is mostly restricted to labs that deal with it. But if a technology were to be converted to productivity, people should know something about it, otherwise, they will not become users.

Commercialization of microfluidics has been a point of interest for a long time and has many researchers within the field frustrated. Back in 2006, George Whitesides raised this question in his inspiring paper1, yet more than a decade later we don’t seem to have any good answer. Some say we need a ‘killer app’2, while others point to the gap between academia and industry3. Whatever the reason may be, we can all agree that commercialization is an important step which microfluidics as a technology hasn’t been able to take.

Many technologies emerged as a solution to a problem, and in the process of solving it, the technology proved its worth and people found new fields to apply it to, promoting further development and proliferation. At its current state, microfluidics exists more like an opposite: it is a versatile and powerful solution by itself, yet struggles to find a problem to tackle, one with enough importance that could help promote the technology to the general public.

Antimicrobial resistance (AMR), the phenomenon where microbes develop various abilities to survive antibiotic treatment, is an almost inevitable problem that would arise from the use of these drugs. Fleming himself foresaw this (rather ironically, during his own Nobel Prize acceptance speech4) even before mass production and application began. As antibiotics became an inseparable part of modern society, superbugs also evolved from this constant selection pressure. Misuse and overuse serve to speed up resistance development, tipping the balance in favor of the bugs even further. Right now we are dangerously close to the so-called ‘post-antibiotic age’, which could spell the end of modern healthcare and send us back to the dark times where simple infections can kill.

Sounds like a problem with enough scale and importance, right?

Obviously, AMR is a problem so complex that it would take much more than a single technological advance to solve. But we believe that it is a problem microfluidics can help dealing with, through which the technology itself can mature into products and gain the trust of end users. Specifically, there are three aspects where the potential of microfluidics has been well-demonstrated:

Microfluidics grants researchers the precision of control and analysis not found in conventional, plate-based methods in microbiology. This, in turn, generates new insights into the organisms and ways by which AMR develop and progress, the knowledge that can contribute to more effective countermeasures. Phenomena such as asymmetric growth5, persister dynamics6, and stationary phase protein production7 have been observed and studied using microfluidic systems and results proven to be highly relevant to AMR. Similar studies could point out new directions and targets for the control of resistance.

Antimicrobial susceptibility testing (AST) is an important clinical technique performed to determine the appropriate type and dosage of antibiotic for a specific infection. Traditional AST methods are time-consuming, labor-intensive and often lack in quantification, thus unable to provide the necessary data efficiently. This leads to misuse and overuse of antibiotics, as in many cases prescriptions are given empirically and evolve into cycles of trial and error, contributing to the progression of AMR. Utilizing microfluidics, research groups have been able to develop novel AST methods that are much faster (able to obtain results within a few hours as compared to several days) and highly accurate while reducing cost in labor and materials. Analysis can be scaled down to single-cell level8 9, multiplexed10, and expanded to be two-dimensional11, thanks to the inherent advantages of microfluidic systems. 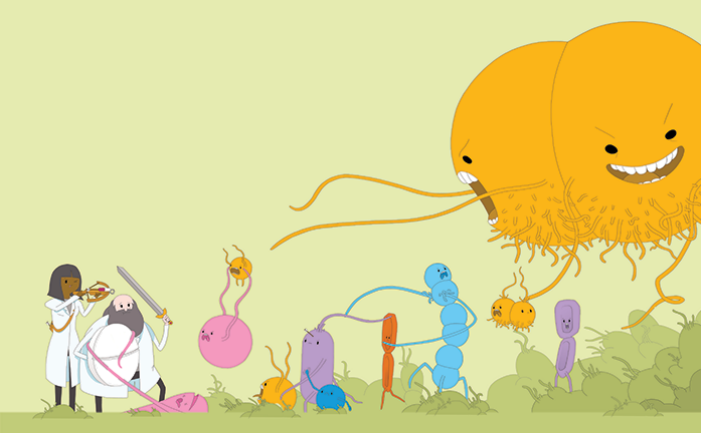 Developing new antibiotics was once seen as an answer to resistance, yet it has become such a difficult task to identify and select novel compounds that even the largest pharmaceutical companies are abandoning the field. Microfluidics could help with this dilemma by both expanding the source of drug leads and making the process of compound selection more time and cost-effective. The discovery of teixobactin demonstrates the use of microfabricated devices in cultivating the microbial strains that cannot be grown with standard laboratory protocols12. These microbes make up nearly 99% of soil bacteria, where major antibiotics were previously found, and constitute a huge, untapped source of drug leads. Subsequently, microfluidics platforms can also be used in lead selection and testing to speed up the process and reduce the cost13 14, which would make the development of new antibiotics a financially feasible and sound goal to pursue once again.

‘Good against the living, that’s something else.’

Fascinating and promising the published researchers may seem, we need to be reminded that those are still a far cry from the practical application in problem-solving. Microfluidics has shown its worth against the ‘remotes’ of AMR, but how would it fair when faced with the ‘living’? Here lies a gap of communication and understanding between the academia and industry, from where uncertainty to this question arises. The details of needs and limitations in real-life scenarios of clinical care, drug development, and resistance monitoring have remained largely unexplored by the researchers, which blocks the transformation of papers in leading journals into actual applications.

Being in the academia, our priority is more often to impress the reviewers (who are most likely also in academia) with brand new concepts and fancy designs. But a feasible and useful tool to solve real problems often has different characteristics – simple, robust, cheap, whose working principle someone can pick up and understand without years of training as a graduate student. Even though we are all intrigued by functionalities and complex tasks microfluidics could accomplish, it would benefit more people if the technology could become products that, with the application of a single drop of sample, after the push of one button, returns a reliable result. The problem of superbugs demands such solutions and offers microfluidics a much-needed opportunity to prove that it is good against the ‘living’ of real problems in the field. After all, the Force would seem pretty underwhelming if Luke used it to write articles for Proceedings of Galactic Academy of Science instead of blowing up the Death Star.

Zhengzhi Liu is a Ph.D. student at School of Biomedical Engineering and Sciences, Virginia Tech. He received his BSc (2016) from Hong Kong Baptist University, where he worked on the development of novel, hydrogel-based microfluidic tools for microbiological application. His current research focus involves circulating tumor cells (CTCs) and their epigenetic analysis using microfluidic systems. When not working with microfluidics, microscopes or mice, he enjoys cooking and baking cookies.