Warning: Creating default object from empty value in /home/customer/www/ufluidix.com/public_html/circle/wp-content/themes/salient/nectar/redux-framework/ReduxCore/inc/class.redux_filesystem.php on line 29
 We Have Liftoff: Organs-on-Chips in Space - The MicroFluidic Circle

We Have Liftoff: Organs-on-Chips in Space

When British neuroscientists began developing brain organoids to study autism and schizophrenia some years ago, their colleague Dr. Martin Coath, of the University of Plymouth, publicly stated that they were fueling a crisis: “A human brain that was ‘fully working’ would be conscious, have hopes, dreams, feel pain, and would ask questions about what we were doing to it.”

Fears akin to Coath’s have trended ever since Mary Shelley wrote “Frankenstein” in 1818. While it is unlikely that organoids will be asking what we’re doing to them anytime soon, it is likely that they will be doing some space traveling.

The U.S. Center for the Advancement of Science in Space (CASIS), in collaboration with the U.S. National Center for Advancing Translational Sciences (NCATS) and the National Institute of Biomedical Imaging and Bioengineering (NIBIB), plan to study organs-on-chips onboard the International Space Station-National Laboratory (ISS-NL). Data from this effort will contribute to research about microphysiological systems technologies.

Why in space? Because of microgravity.

“Physiological changes, such as aging, tend to be more dramatic under microgravity, and can provide insights that can translate to identifying novel targets for drug discovery and development, and more effective treatments here on Earth,” said Dr. Danilo A. Tagle, NCATS associate director for special initiatives. On Earth, gravity forces cells to grow in somewhat flat layers in a dish. Within microgravity, cells are free to grow more smoothly into 3-D forms, as structures that better imitate human organs. 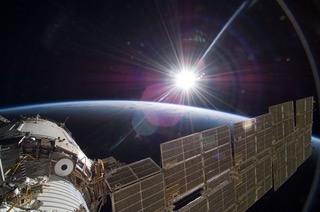 A photo was taken from the International Space Station.
Credit: NASA

Organs-on-chips have up to now replicated the biochemical environment for tissues — on Earth. Advancing this research on the space station has the potential to accelerate the ways organs-on-chips can be more useful for healing, with the discovery of molecular mechanisms that fuel disease. “This collaboration will allow us to better understand disease processes in a way we never could before, and improve human health by deploying tissue chips technology at the ISS-NL,” said Tagle.

Organs-on-chips are one focus of NCATS’ effort to lasso the far reaches of the U.S. Food and Drug Administration drug approval process, which can metamorphose from good intentions into decades of fruitless, costly testing of toxic products. Given organs-on-chips’ potential to be biological twins of human organs, to separate what’s safe from what’s toxic, and to accomplish that before patients become bankrupt, or die — of old age as much as of disease — any research, anyplace in the galaxy, seems welcome.

NCATS was founded in 2012 to facilitate more cures delivered to more patients more quickly. Working without gravity supports the “more-quickly” portion of that mission. CASIS, NCATS and NIBIB are aiming to support investigators with expertise in microfluidics, materials science, microfabrication, stem cells and disease modeling.

CASIS is the agency that manages research onboard the space station. CASIS Deputy Chief Scientist Dr. Michael Roberts said, “The ISS National Lab is proud to be another crucible of medical innovation.”

Situating a Frankenstein-fear-factor inside a “crucible” is not likely to dilute the objections of organoid skeptics, but it cheers advocates. “This joint effort is an opportunity to further develop and refine organ-on-a-chip platforms for research in space,” in the opinion of Dr. Seila Selimovic, director of the NIBIB program in Organs on a Chip. “The inclusion of bioengineering approaches in this program will provide unique technologies for improving our understanding of human health and disease.”

Automobile crash-test dummies, when they are propelled into a wall at high speed, help scientists to understand how that would injure a living passenger. Similarly, the value of organs-on-chips is that they safety-test medical treatments before they ever get near a human. Even before rocketing to space, microfluidics systems research has been providing scientists with improved precision; upgraded laboratory techniques to achieve specific cell architecture have been critical to organoid development.

So it will be valuable to observe microfluidic systems in microgravity.

“A long time ago, in a galaxy far, far away . . .”
Not quite. It’s more like, “Sometime soon, in our own galaxy, microfluidic systems will reside on the space station.”