Heart On A Chip: Review of Recent Microfluidics Advances

What is Heart On a Chip? What is Heart on a Chip used for?

The heart is the key player of the circulatory system that directs electrical signals to contract the muscle walls and pump blood into a network of blood vessels, arteries, veins, and capillaries [2]. Impaired heart muscles require drugs to regulate the rate and rhythm of the heartbeat and researchers must predict which drugs might be compatible and which may cause adverse side-effects or toxicity in advance [3]. Preclinical drug development can be hampered due to high failure rates of cardiac side-effects and researchers must therefore test therapies in controlled laboratory environments prior to translation in patients[4]. Heart on a chips are new tools enabled by advances in 3D microfluidics for creating microenvironment for testing cardiac drugs and therapeutic approaches. This would reduce animal studies.

Why three-dimensional models of heart on a chip are preferred?

The heart beats 2.5 billion times within a normal human life span owing to cardiomyocytes. A distinct set of components form the cardiac conduction system [5]. The human heart contains a working myocardium with distinctive chambers and a built-in electrical conducting system. However, most heart-on-a-chip microfluidic platforms in use are limited to disease models that recapitulate the ventricle chamber [6]. Clinical dysfunctions of the circulatory system typically result from acquired conditions of myocardial ischemia/infarction, age-related degeneration, procedural complications, and cardiomyopathy due to drug toxicity [7]. Clinicians and researchers therefore aim to develop 3-D windows using microfluidics to understand the function of human heart tissue in the lab to test new drugs. Then prior to drug administration in patients the researchers may predict and eliminate cardiotoxicity safely and effectively [8] using the 3D microfluidic chips that model heart physiology.

What are new approaches for 3D heart on a chip microfluidics models?

It is difficult to regenerate the human heart-in-a-dish due to its chamber-specific orientation and complex electrical functionality. Instead, researchers have devised a few Microfluidics based methods to develop biomimetic human heart-on-a-chip devices, including:

Below, there are examples of the above approaches for creating 3D microfluidics based heart on chip platforms. 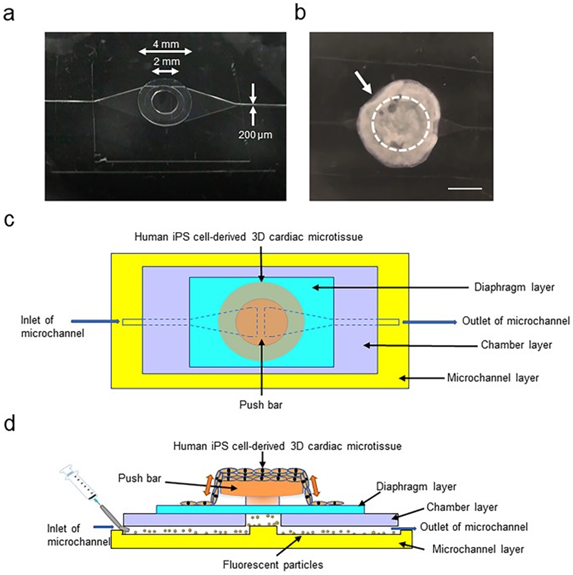 Human iPSC-derived cardiomyocytes are promising resources for drug discovery to understand heart disease and test cardiac toxicity [12]. Cardiac toxicity is a common cause for drug withdrawal from the market and the most critical event during new drug development. Biomimetic human heart-like tissue structures can be developed using diverse cardiac cell lineages to accurately determine the physiological response of the heart to drug candidates during preclinical safety tests [13].

In this microfluidics proof-of-concept, a new heart-on-a-chip (HoC) microdevice combines 3-D cardiac microstructures derived from human iPSCs with microfluidic chips to observe the kinetics of pulsing cardiac microstructures. The device quantifies the physiological parameters of fluidic output, pressure, and force [9]. The research additionally studies the effect of intracellular calcium ion concentrations on contraction of cardiomyocytes. The devices were then used to understand the pharmacological response to isoproterenol; a β-adrenoceptor agonist, to validate the HoC for human iPSC-based pharmacological investigations.

The induced cardiovascular cells were first seeded on temperature-responsive culture plates to form thickened cardiac microtissues. The technique promoted structural organization and maturation of the sarcoplasmic reticulum in the human pluripotent stem-cell derived cardiac tissue. The microfluidic chip was fabricated by compartmentalizing a polydimethylsiloxane (PDMS) material to include a microchannel, chamber, diaphragm, and push bar. The finalized device was sterilized and coated with fibronectin to promote the attachment of 3-D cardiac microtissues during HoC construction. The construct elegantly confined spontaneously beating 3-D cardiac microstructures and demonstrated heart pump functions to support cardiotoxicity tests and drug discovery by using the setup.

A bioelectronic ischemia-on-a-chip model to study the effects of acute hypoxia on cardiac function.

In the second proof-of-concept investigation, a bioelectronic heart-on-a-chip microfluidics model was developed to study the effects of acute hypoxia on cardiac function [10]. In this device, a microfluidic channel rapidly regulated oxygenation and mimicked the regions induced by a temporary coronary occlusion for the activation of hypoxia-related transduction pathways in HL-1 cardiac model cells [14]. The extracellular bioelectronics provided continuous readouts demonstrating the initial period of tachycardia, followed by a reduced beat rate, and eventual arrhythmia experienced by the hypoxic cells.

The intracellular bioelectronic device was made of platinum nanopillars that temporally entered the cell cytosol during electroporation processes, to produce action potential-like readouts that narrowed during hypoxia due tocellular membrane repolarization. The extra- and intracellular bioelectronic device showed unprecedented mapping capabilities to provide a new platform to understand electrophysiological responses to hypoxia with applications for disease modelling and drug development [10].

The bioelectronic device was developed using top-down photolithography and microfabrication techniques. The extracellular measurements were accomplished with planar electrodes. The intracellular measurements were obtained using platinum nanopillar arrays that formed a bioelectronic interface at the intercellular space. The microfluidic device assemblies contained a polydimethylsiloxane (PDMS) channel layer permanently bonded onto the bioelectronic device chips. The microfluidics channels were seeded with fibronectin and cardiac cells to promote cell attachment. The culture medium flowed through the microchannels to provide sufficient nutrient and oxygen delivery for healthy cell culture. The ischemia-on-a-chip model was then exposed to a hypoxic medium (1 percent oxygen) to activate cell signaling pathways relative to the onset of mild hypoxia [15]. The platform successfully modelled normoxia, hypoxia and early stages of recovery to understand ischemia-reperfusion injury.

Existing HoC devices depend on manual cell injections for non-standardized tissue development, which requires excessive amounts of cells. The new centrifugal HoC only required a minimal quantity of cells to create uniaxially aligned cardiac muscle fibers with well-aligned sarcomeres with long-term viability and functionality. The HoC provided a platform to microscopically observe the detailed beating kinetics of heart muscle, and understand the pharmaceutical kinetics of drug candidates such as isoproterenol.

Numerical simulations confirmed the confinement of convective flow in the medium containing compartment, alongside simulations of diffusive transport during nutrient supplementation to the cultured tissues. The microfluidic chip was placed in a conventional centrifuge to transfer cells into individual tissue chambers without using conventional external pumps in a process that eliminated air bubbles to provide a well-defined system. The functional tissues were distinguished by their noticeable beating motion under bright-field video microscopy and the beating kinetics were gathered. The system provided a multifunctional platform for a variety of biomedical applications including drug testing and personalized medicine.

Do you need to fabricate or design microfluidic heart on a chips? uFluidix can help!
Contact us

Organ-on-a-Chip: Microfluidic technology that can revolutionize the pharmaceutical industry

What is Organ on a chip and why it is important.

Microfluidic liver on a chip-review

Read about recent advances to know about Microfluidics contribution to Liver on a chip field.