It is not far from reality to state that the brain is the most complex system in the universe. The number of connections in our brain is estimated to be in the order of 100 trillion which is 1000 times more than the number of stars in our galaxy, the Milky Way.  There is no wonder that in vitro models of this extremely significant system have not been much of a success.

In vivo models have two main limitations. Although they are complex physiological models, they are not conclusive. Oftentimes, the results obtained from animal models do not properly relate to that of humans. Also, there are ethical concerns and controversies on sacrificing animals for research.

2D in-vitro models such as regular Petri dishes, can form mono-layers of the target cells and can be used for high-throughput drug screening but come short in modelling higher-order complexities such as the 3D nature of the cellular environment and fail to model the intercellular signalling properly. 3D histotypic and organotypic models can create cellular conditions of higher complexity. Examples of these models include self-organizing organoids and bioprinted organ cultures. Long-term maintenance of the culture and proper control over the environment is a challenge in these models. Microphysiological systems, commonly known as organ-on-a-chips are 2D or 3D cellular constructs that allow precise control, manipulation, and real-time analysis of the cells via interconnected channels in the Microfluidic device. Organ-on-a-chips have allowed researchers to create biologically-relevant microstructures mimicking the natural habitat of the cells for a wide variety of applications such as drug discovery, personalized medicine, or fundamental research on cellular mechanisms. Microphysiological neural systems, called brain-on-a-chips, have been a significant technological advancement in making human-relevant brain models for mimicking higher-order physiological and pathophysiological responses.


What are the advantages of Brain Chips?

Microfluidics has distinguished brain-on-a-chips (Brain Chips) design compared to other 2D and 3D models. Brain Microfluidic chips stem from their ability to advance the physiological complexity of the models to higher anatomical orders which in turn facilitates creating models with higher-order functionalities.
Brain Chips regularly facilitate one or multiple higher-order anatomical features such as:

In addition to the more complex anatomical characteristics, Brain Chips offer more control over the cell culture environment. The microfluidic channels connected to the cell culture microchamber allow continuous exchange of nutrients and growth factors along with discarding the waste. The continuous flow ensures the cells get exposed to the nutrients equally. Microfluidic chips allow integration with single or multiple manipulation and read-out systems. Magnetic, electrical, mechanical, or optical actuators can be employed and combined to stimulate the cells while pressure, flow, optical, or electrochemical sensors monitor the cells in real-time.

What are some applications of Brain Chips?

The features of the Brain Chips make them ideal for studying cell growth, migration, and signaling besides genotypic and phenotypic and circuit mapping in any of the following areas:

How do Brain Chips help in Blood-Brain Barrier modelling?

The Blood-Brain Barrier (BBB) is a highly selective membrane that separates the blood flow from the bulk of the brain and the central nervous system. This membrane is semi-permeable and ensures that the brain maintains its functionality by blocking unwanted molecules and ions from entering the brain. This can also include avoiding the medicine from transporting to the brain that leads to failing a therapeutic approach. Impairments in the blood-brain barrier can result in unsupervised transport of chemicals and immune cells to the brain which can result in neurodegenerative diseases such as Alzheimer’s, Parkinson’s, and multiple sclerosis. Thus, having a platform for creating a biologically-relevant model for the blood-brain barrier is essential for studying neurodegenerative diseases or coming up with new therapeutics.

Microfluidic blood-barrier chips, called µBBB, can vary in design and complexity. Sandwich design is a 3D model where the endothelial cells are cultured in the upper channel of a two-layer PDMS chip. The top layer is separated by a thin membrane from the bottom channel where brain cells are cultured. The porous membrane between the layers represents the blood-brain barrier. The thickness of the middle membrane and the limited cell-cell interaction between the top and bottom layers are the drawbacks of this system. Also, from a technical point of view, manufacturing these chips can be difficult since it requires multiple steps of aligning and bonding.

The parallel design takes a planar approach. Here, the endothelial cells and the brain cells are cultured on opposite sides of a series on intermediary microchannels. The intermediate microchannels connecting the two sides can be adjusted in terms of width and length to achieve the desired level of permeability. These systems can be combined with hydrogels to better mimic the membrane.

Recapitulating simple organs in vitro is difficult, modeling tumors, cancer progression, extravasations, and metastases are way worse. The tumor highly interacts with its microenvironment that makes spheroid, transwell cell cultures, and organoid unsuitable for mimicking a cancerous tissue. The associated tumor intestinal fluid pressure and mechanical/chemical transfer with the surrounding cells and the local tissue add to the complexity of the pathophysiology of the disease.  A reliable in vitro microfluidic model can be of significant help in discovering new anticancer therapies as well as monitoring the patient’s progress in response to the drug. Brain Chips exploit microfluidic technology to provide a human-relevant microenvironment for studying tumors by offering control over the fluid flow, biochemical and mechanical cues, etc. Examples of microfluidic brain cancer chips are as follows:

– Tumor growth modeling: These chips are excellent tools for understanding the mechanisms by which the tumor influences the neighboring cells as well as how it gets affected.

– Angiogenesis: Angiogenesis is associated with formation and sprouting of new blood vessels and is the hallmark of brain tumors especially glioblastomas, the most malignant brain tumor. Various microfluidic chips have been tested so far for angiogenesis recapitulation. They are normally lined with an ECM gel followed by introducing endothelial cell and monitored for capillary network formation.

Many drugs are known to cause inflammation or have side effects. Conventionally, rodents were used for brain disease modeling which is labor-intensive, ethically controversial and inconclusive. Microfluidic chips are a powerful means for modeling neurodegenerative diseases due to their capability for compartmentalizing the brain network and the vasculature along with compatibility with various ECM proteins and selective exposure to biochemical and mechanical cues.

Often, the patient-derived iPSCs or Neural Stem Cells (NSCs) are differentiated into the desired cell type and placed in the pre-functionalized microchamber. The microfluidic strategies for modeling brain diseases depend on the target disease. For instance, neuromuscular diseases such as ALS, the neuromuscular junction (NMJ) and synapse formation and functionality are of interest. Therefore, the microfluidic channels are fabricated and designed such that the axons extend to form an observable and clear NMJ. A popular design consists of two microchambers that are connected to each other via parallel small microchannels. Motorneurons proliferate on one side and the microchannels allow axons to spread and meet the muscle cells on the other side. 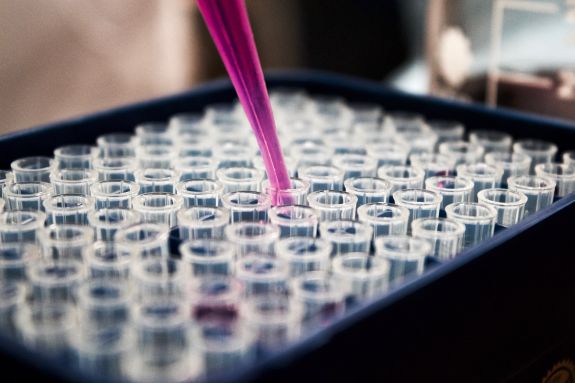 Organ on a Chip for drug development

Read more on how organ on a chips are used to reduce the drug development failure rate and for personalized medicine. 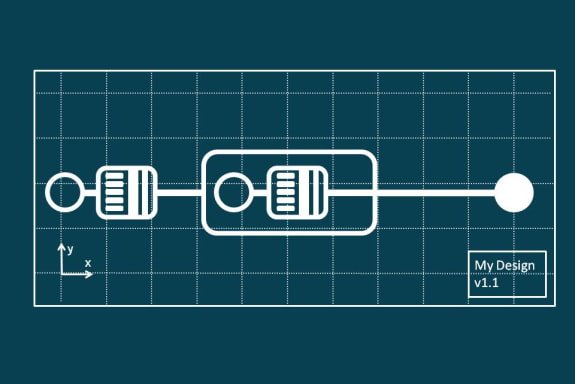 Design parameters for organ on a chip devices

Explore the different aspects of designing an organ on a chip. Learn about the cell source, flow dynamics, and the structure of the organ on a chips. 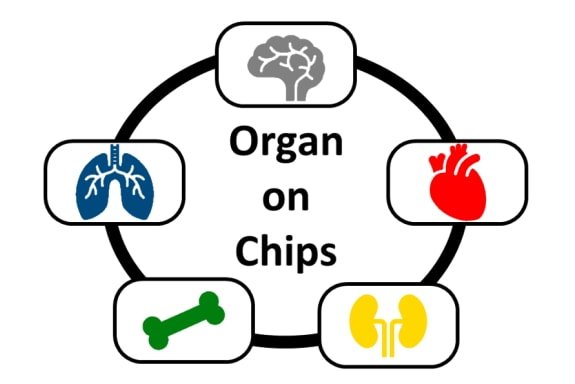 Organ On Chips: Questions to address before they can move into mainstream applications 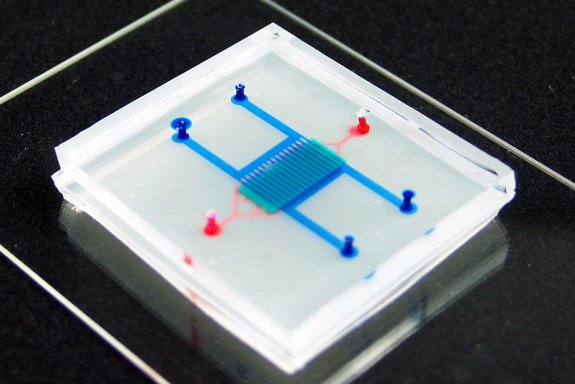 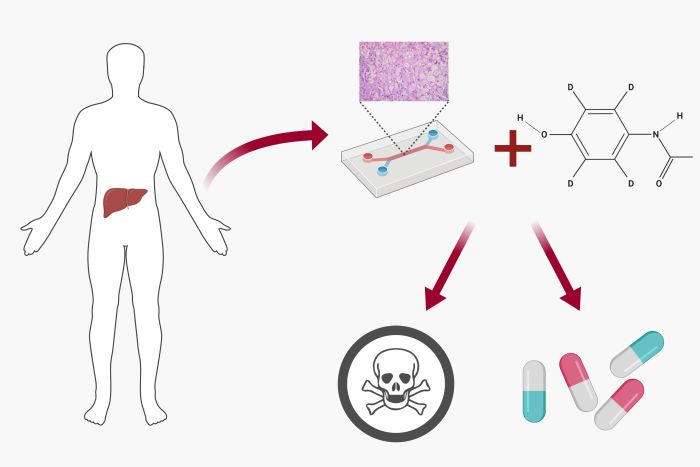 In a liver-on-a-chip, a highly controlled cell culture environment is employed for drug toxicity screening and metabolism analysis.