What is a microfluidic device? 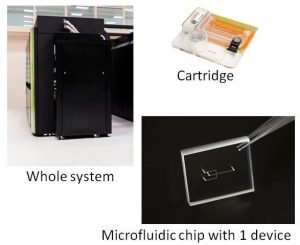 There are many types of Microfluidic devices. Here we name some popular designs based on their geometry.

As the name says is a single straight microchannel with one inlet and one outlet. A single channel is the first choice when the researcher is evaluating material compatibility; such as optical, thermal, chemical, or surface properties. Sometimes a straight channel microfluidic device is used in cell culture studies to optimize reagents, channel dimensions, flow rates, or channel coating for each specific cell type or size. There are many Microfluidics applications for a straight channel.

Y junction microfluidic devices are mainly used for separation applications. Usually, a heterogeneous mixture of particles such as cells enters from one side, separated at the junction, and then delivered via outlet ports. Many physical or flow characteristics could be used in Y-Channel Microfluidic devices to drive the separation such as magnetic, electrical, acoustic, thermal, laser, sheath flow, gravity, etc…. Y Channels are also used as mergers when two different flows enter from one side and a mixture exits.

In a typical T-junction Microfluidic device, there is a main straight channel and a perpendicular side channel that connects to the main channel somewhere along the length. T-Junctions are usually used for the generation of droplets, such as water-in-oil or oil-in-water. They are usually simple but useful droplet generators.

Cross-Junction Microfluidic devices are made when two perpendicular channels connect to the main channel, mainly in a symmetric way. The junction often acts as a micro-nozzle, therefore creating a flow-focusing phenomenon. Recently many flow-focusing droplet generators such as drop-seq, dronc-seq are introduced for high-throughput sequencing of single cells and other applications.

Spiral Microfluidic devices are usually a single spiralling channel that branches at the outside end of the channels. Flow normally enters from the center of the spiral and exits from the outside. Spiral channels are mainly used for the separation and sorting of particles based on inertia. Usually, different sizes, weights or shapes of particles can be separated using this strategy. It should be noted that the number of branches at the exist could be anywhere between 2-10, depending on the application.

The laminar nature of flow in microfluidic channels means the dominant mixing force is diffusion. This is more pronounced in smaller micro-channels of lets say smaller than 25um. Mixing two different reagents in micro-channels could be very challenging, especially in the case of immiscible liquids such as water and oil, or different viscosity of liquid — syrup and water. If mixing is needed, then one may choose a micro-mixer microfluidic device. Micro-mixers work by creating local turbulent flow, there are many designs and geometries, but the two most famous devices are serpentine mixers and herringbone mixers.

Often researchers need to image a subject. For instance, Oil and Gas researchers need to model the transport of crude oil or saltwater in porous media, or biologists need to monitor red blood cell deformability in a sepsis study. Others may need to trap an object like C-Elegans and immobilize it for taking a time-lapse video, or follow one single white blood cell and monitor its behaviour in fighting antigens. Microfluidic devices provide a perfect solution for imaging microscopic objects.

Capture and separation are some of the main applications in Microfluidics. There are hundreds of ways to isolate and separate target particles using Microfluidics devices. The most famous are sieve type features in micro-channels where the channel allows certain sizes to pass while holding or capturing a target particle. Other famous types are vortex based traps where interesting looking chambers on the side or inside of the main channels capture the targets based on its size and shapes. Bottleneck design micro-channels are other types of capture designs. Cancer cells, stem cells, and blood serum separation microfluidic devices are big applications here. Y-channels or serpentine channels could also be considered as separating microfluidic devices.

Merging microfluidic devices are used when several reagents from different sources need to mix and react. Also often certain chemicals or particles such as markers or cells need to enter the main stream in a precise manner. As one can expect most biological studies or chemical synthesis applications are multi liquid and a good client for microfluidic merging devices. One of the most famous merging devices is hydrogel bead makers.

Gradient generators or serial dilution devices are used when two or more input liquids need to mix into desired concentrations. These devices usually utilize a network of carefully designed microchannels which receive the input flow and mix them to produce specific concentrations. For example, yellow and blue ink could be mixed to produce 3 different shades of green.

How Microfluidic Devices are Fabricated?

Microfluidic devices are usually made by layering. The micro-features are fabricated on the surface of a flat layer via different methods such as casting, etching, molding or machining. The feature layer is then bonded to a substrate layer to enclose the channels. Sometimes more than two layers are used, such as when a filtering membrane is needed, a diaphragm valve is embedded, or an electrode layer is required.

Which Materials Are Used to Fabricate Microfluidic Devices?

Microfluidic devices are often made from PDMS. PDMS is a special silicone with exceptional optical, chemical, and thermal properties. However, for some applications, PDMS could suffer from surface properties. An example is when protein absorbance is critical. There are many strategies to tailor the PDMS channel’s surface for each application. Glass, silicon and thermoplastics such as PMMA, PC, or COC are also used for the manufacture of microfluidic devices.

Where to Purchase Microfluidic Devices?

Most microfluidic devices are custom made. It is because each application requires certain geometries, inlet/outlet, channel depth, etc that need to be precisely tuned to deliver the function. There are few distributors with a selection of the above Microfluidic devices. uFluidix does not sell pre-made microfluidic devices to protect the enormous amount of intellectual property that it handles belonging to its clients or prospects. However, uFluidix has mastered the custom fabrication of microfluidics to deliver super high-quality microfluidic devices in a very short time at an affordable price. Most pharmaceutical, medical device, and university research centers purchase custom Microfluidic chips from uFluidix on a recurring basis.