Discover the potential of microfluidics technology in C. elegans research 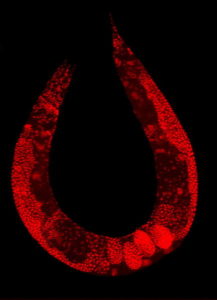 Recent advancements in microfluidics have revolutionized the research on the model organisms. Model organisms are exceptional species that are employed in laboratories to study biological phenomena. Despite being simple, these organisms can provide insight into other species. One of the model organisms that has benefited significantly from microfluidic technology is the nematode worm, Caenorhabditis elegans known as C. elegans. Microfluidic devices that are used for studying nematodes such as C. elegans are commonly referred to as worm-on-a-chips. These microfluidics biochips are used as strong tools for manipulation of these worms as well as the precise behavioural and developmental assays at unprecedented resolutions.

What is C. elegans and what makes it important in research?

Since its emergence as a model organism in the early 1960s, C. elegans, has appeared as a powerful means for studying a broad range of topics ranging from developmental biology to neuroscience. Its body is made up of approximately 1000 cells, a third of which are nerve cells. Having many genes with functional counterparts in humans, a transparent body, the short life cycle of two weeks, small size, and being easy to mutate are among the advantages of using C. elegans as a model organism. While remaining a primitive and simple model organism, C. elegans carries some complex circuits such as the insulin signalling pathway.

What are the challenges in C. elegans studies?

C. elegans research can be arduous and time-consuming due to many steps that need to be carried out manually. This can increase the cross-contamination risk as well as reducing the repeatability of the experiments due to its dependency on the operator’s skills. Moreover, in some cases, such as picking up the worms at a particular stage, manual selection of the worms can take hours that in turn reduces the efficiency and throughput. Furthermore, it is typical to read out the measurements from the average of a population. However, for many applications, such as drug screening, mechanosensory and chemosensory assays, the single worm response can be of crucial importance. There are differences from worm to worm that can affect the average response. Single organisms’ studies are much more comprehensive and can provide a better understanding of the organism’s behaviour. The birth stage of the worm, body size, etc. can affect the results to a high extent. Also, working with a population rather than individual worms requires more reagents and increases the cost of the tests.

How do microfluidics worm-on-a-chips help in C. elegans research?

Microfluidic chips  made of PDMS, called worm-on-a-chips, have been very promising in automating various aspects of C. elegans research omitting the aforementioned issues. Microfluidic technology has solutions for both routine lab procedures as well as case-specific experiments. For example, using glue and anesthetics for immobilizing C. elegans is low-throughput, time-consuming, and irreversible but a microfluidic chip can immobilize the worms at high-throughput without damaging the worms and with the possibility of releasing them for further analysis. Learn more about how microfluidic technology provides tools for rapid immobilization, positioning, sorting, synchronization, and neural and behavioural study of C. elegans in the following microfluidics articles.

Do you need microfluidics worm-on-a-chip devices for C. elegans research?
Contact us to learn about the latest or purchase high quality microfluidic devices !
Contact us

Read more on how microfluidic technology is employed for microfluidics sorting and synchronization of C. elegans

Use of microfluidics for Behavioral assays using C. elegans