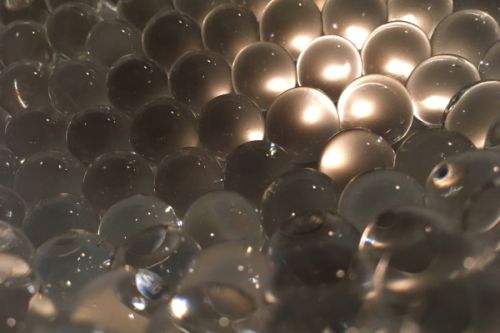 Hydrogels are networks of hydrophilic polymer chains that are crosslinked to form a gel with a high level of water content. Hydrogels have been used in microfluidic for a wide variety of applications such as tissue engineering and organ on a chips. They have been used both as the fabrication material for manufacturing the microfluidic chips and as a functional section integrated into the microchips such as a diffusion barrier or as a cell culture medium. Hydrogels are proven to be excellent scaffolds for both 2D and 3D cell cultures due to their high porosity allowing nutrient and gas transport as well as modifiable chemical and mechanical properties. Based on the application, either a natural or a synthetic hydrogel can be used for culturing cells. Microfluidic chips are compatible with both types. Natural hydrogels are advantageous in that they promote cell adhesion and matrix remodeling and degradation while synthetic hydrogels offer more flexibility in material properties.

Hydrogels hold several key advantages that make them beneficial in Microfluidics experiments. They allow diffusion of small molecules such as nutrients and growth factors required for cell culture as well as waste removal. The optical transparency of the hydrogels enables the real-time microscopy of the samples. Moreover, hydrogels are biocompatible. They are non-toxic to cells and have an adjustable Young modulus that can be tailored to mimic the condition of the cells’ actual extracellular matrix (ECM).

Covalent bonds between the molecules can cause more permanent crosslinking. A typical way of crosslinking is adding functional groups that will undergo reactions in the presence of an external trigger such as light or heat. Acrylates, acrylamides, Hyaluronic acid (HA), chitosan, dextran, gelatin, poly(ethylene glycol)(peg) are examples of hydrogels crosslinked by covalent radicals.

How to integrate hydrogels into microfluidic chips?

Lithographic methods are widely used for fabrication of microfluidic device. It can also be modified to be used for hydrogel crosslinking. A UV light source and a mask are needed in this method. The mask should be placed between the hydrogel and the light source. The UV light passes through the mask and crosslinks the hydrogel and defines the features. A well-known technique uses this approach to produce custom-made hydrogel microparticles. The hydrogel precursor solution passes through a microfluidic channel where it gets exposed to UV to form the microparticles. Then solidified particles get flushed out of the device inside the collection chamber to allow for the next round of crosslinking.

Here, a UV light source is combined with an automated stage to print the hydrogels in 3D and crosslink them in real-time. This method can be easily used to make 3D scaffolds for cell culture. Although this technique can be simply automated, it has not been promising for manufacturing hydrogel microfluidic chips yet.

Two-photon polymerization (2PP) utilizes a femtosecond laser and a precise stage to generate sub-micron features in photosensitive material. The laser pulse is close to the Infrared spectrum which makes it cell friendly as opposed to UV light. Also, with the 2PP method, free-hanging objects can be made without the need for any support. Although 2PP is capable of fabricating features with ultrahigh resolutions, its drawbacks such as costly equipment and time-consuming fabrication hinder its widespread use.

Soft lithography refers to a series of techniques used for replicating or fabricating a structure using an elastomeric stamp or mold. A more detailed explanation of the soft lithography technique for fabricating microfluidic chips can be found here.
Microcontact printing includes inking and drying of the target solution over the surface of a stamp followed by placing the stamp in contact with the hydrogel to print the patterns on its surface. The hydrogel could be cast over the stamp (called the master mold here) to replicate its features onto the hydrogel. The hydrogel chip can then be peeled off after crosslinking. Alternatively, the mold could be made of a sacrificial material to be dissolved after the fabrication. Original uFluidix post.

Review papers about integration of hydrogels into microfluidic chips