Should I fabricate PDMS chips myself, or purchase custom-made devices?

PDMS and soft lithography have been the first choice for fabrication of Microfluidic or lab on chip devices since the early 2000s. The decision to purchase your custom made PDMS chips or fabricate them yourself might seem tricky at first. Here we outline and discuss the main factors involved in making this decision and present a suggestion at the end. We hope these would help you to find an answer that best suits your needs and abilities.

To fabricate PDMS microfluidic devices there is minimum equipment you need. These include a convection oven, a degasser, and an oxygen plasma treatment unit with access to oxygen. These could be sourced at a reasonable cost with several available vendors. You do not need a cleanroom to fabricate few PDMS microfluidic chips in general. However, a cleanroom is a necessity once you need to produce several of the same designs, or prototyping small feature designs.

Obviously, there is a need for mold as well. Many universities have foundries or MEMs fabrication facilities that are well equipped to make silicon molds, such as RIE/ DRIE/wet etching, mask writing, mask aligners, spin coaters, hot plates, surface profilers, wet benches. The silicon mold fabrication material cost such as cleanroom fees/consumables, photoresists, or silicon wafers could be hefty. But on a shared basis, they are affordable to most labs. There are serious safety concerns in handling or disposing of very very dangerous chemicals such as concentrated sulphuric Acid, Piranha solution, or Hydrofluoric acid (HF). HF is a liquid that can kill, it may dissolve bones after unnoticed contact with human skin, or do serious damage to lung tissues upon breathing. But with proper equipment and training, the fabrication would become safer.

Silicon molds may also be purchased from commercial foundries. The cost to purchase silicon molds varies from vendor to vendor. It depends on the quality and accuracy of the mold. Molds could be purchased at few hundred dollars each, for lower-end molds. A lower end-mold may have inconsistent channel depth, for example, a 100um deep channel could range between 70um-150um from wafer to wafer, or even from one side of a wafer to another side. Or the micro features on the mold could come out in a shape different from your drawing, for example, a 20um square could look like a jagged oval. The channel walls of a lower-end mold are often not smooth. These type molds, however, could be a great choice for less sensitive microfluidics experimentation. An approximately 200umx200um channel to pass flow and visualize could be an example. Higher-end molds, on the other hand, could cost a few thousand dollars. These type molds usually are the close replica of the drawing. The channel depth is close to the design. Small features would come close to perfect, and channel walls are smooth instead of being jagged. In such molds, a 5um diameter circular pillar would look just like a circle under a microscope. Multi-layer alignments, in higher-end molds, are close to perfect. And so on … When purchasing a mold, one must know what quality they are buying, instead of just looking at the price.

Once you have sourced the silicon mold, then the fabrication of simple PDMS chips is straightforward. Basically, cast and cure the PDMS part. Then punch holes in it for tube connection. And finally bond PDMS feature layer to another PDMS, to a sheet of glass, or to a silicon wafer. Proper and reliable bonding of PDMS part to substrate could be a bit challenging. Sometimes bonded PDMS devices leak causing headaches, especially while handling rare or difficult-to-source samples. A user may have followed the same protocol for bonding PDMS chips that created perfect sealing on one day, which created a leaking device the next day! 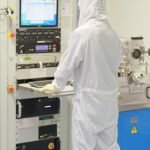 Advanced microfabrication techniques may be needed only when there is need to fabricate designs that are more complicated than simple single-layer designs. These include local or entire surface treatment, multi-layer alignment, electrode integration, 3D devices, etc…. Some of these advanced skills require years of PDMS microfabrication experience. Most expert microfab technicians have developed their own set of tricks that works for them in their own foundry.

Does the size of microfluidic features affect my decision?

The size of the feature is perhaps the most critical design feature when it comes to microfluidics fabrication. Generally speaking PDMS chips with microfeatures larger than 100um features could be fabricated in most labs. But a PDMS device with challenging aspect ratios (too shallow or too narrow), or smaller features (eg less than 25um) are difficult to fabricate and require some level of experience. Small feature devices need to be fabricated in cleanroom, otherwise, the fabrication effort becomes a source of funds drain or waste of time. One reason is that a small dust particle in a non-cleanroom environment, eg a 50um long hair, that freely hovers in the air unnoticed could easily get into a micro feature of comparable size during fabrication to make the device unusable.

Are reliability and repeatability of PDMS chips deciding factors?

Reliability and repeatability become very important passed the proof of concept stage. For example when 10 or 100 samples need to be processed to get meaningful statistical data. If your research is in this stage then you need identical PDMS chips which perform similarly and reliably. For example, if you are culturing cells from the same cell line in 10 PDMS devices, you would like to see comparable cell adhesion, propagation, and viability. This is a bit difficult to obtain when devices are made in a shared university facility, or made by different students on different days. Other reasons for unreliability are: microfluidic channel imperfection or obstruction due to insufficient cleaning or lack of quality control, random leaking, device to device difference because of mold inconsistency, etc…

A proven custom PDMS chip manufacturer, on the other hand, uses good manufacturing practices to ensure the microfluidic PDMS devices are properly quality controlled. The custom manufacturer would ensure that all devices are replica, and would not leak under nominal pressure.

How cost or budget relate to who should fabricate the PDMS chips?

Cost is quite difficult to discuss. Of course, if there is access to the required facility in your institution, also if there are available qualified expertise to cover the microfabrication requirements as discussed above then you should fabricate your own devices surely.

But, if there are facilities without expertise, then someone in your organization needs to get technical and safety training to fabricate the PDMS microfluidic devices. This could make sense financially if there is a continuous need for microfluidics fabrication. For a fair judgment, the cost needs to be looked like a big picture. For example, how many devices the trainee would have to make, or how many mold or equipment would be broken, or how many days would be spent until fabricating the necessary devices each time.

And Finally, if there is no facility and no expertise in your institute to fabricate your own microfluidic devices, then it would be difficult to justify the costs unless you are establishing a new active microfluidic intensive program.

How different is turnaround time if I purchase or make my own PDMS chips?

Once the facility and expertise and the fabrication protocol for your device are in place then a set of ~ 10 devices may be made as soon as 2 days from mask design to PDMS chip fabrication. This is pretty much the turnaround in an established microfluidics group. New ideas or design modifications could be tried very quickly.

On the other hand, purchasing a set of custom microfluidic devices could take anywhere between one week to 12 weeks depending on the vendor and the design complexity. If you are working with a proven custom fabrication company, you may be surprised as to how fast they could deliver a set of very high-quality PDMS chips. This is because such a company has automated and streamlined most of the processes, and has all the expertise and equipment for fabrication and quality control in place. Such a vendor does not conduct trial and error to develop or test new manufacturing processes for making PDMS chips.

Not sure if you want to purchase custom Microfluidic PDMS chips? Ask uFluidix team!
Contact us

What is PDMS and how it is used in Microfluidics?

PDMS has been the material of choice for Microfluidics Fabrication. Learn why?

PDMS is a hydrophobic, optically transparent elastomer. How it can be modified to be different?