What is Microfluidic Acoustophoresis Used For?

The movement of particles or cells by the application of acoustic pressure is commonly referred to as acoustophoresis [1]. Microfluidics acoustophoretic separations of particles (or cells) in complex, heterogeneous liquid mixtures (e.g., blood) is an efficient method for sorting particle populations into purified fractions. Sorting of cells from complex mixtures has important implications for biotechnology, biology, and medicine. The integration of sound-based sorting methods into microfluidic chips has advantages such as automation, rapid time-to-results, high precision, accuracy, sensitivity. These are often the requirements for the development of point-of-care (POC) and diagnostic technologies. In general, particle sorting using sound waves in microfluidic devices can be used for concentrating [2], purifying [1], enriching [3], washing [4], and confinement-trapping [5].

How Does Acoustic Sorting Compare to Conventional Sorting Methods?

A significant advantage of using acoustic microfluidics sorting is that it is a non-contact method thus does not damage cells. Therefore the sorted and happy cells may be used for medically-relevant bioassays [6]. For example, for enrichment of medically-relevant cell types (e.g., cancer cells) for use as diagnostic or prognostic biomarkers[3]. These cell-biomarkers can assist medical clinicians in treating patients or help with the development of personalized medicine. Moreover, sorting with sound waves in microfluidic channels allows for precise alignment and positioning of particles or cells in laminar flow streams. This approach has been used  for the development of on-chip flow cytometry devices [7].

On the other hand, the common method for sorting biological cells uses gradient centrifugation[8]. The centrifuges can handle large volume of liquid samples, but they are bulky compared to microfluidic based acoustic sorters. The inertia load and shear forces in centrifuges can damage cells. Other popular cell sorting methods are Fluorescence Activated Cell Sorting (FACS), and Magnetic Activated Cell Sorting (MACS). The methods require labeling the cells with marker reagents prior to sorting [9]. The labeling strategy enables efficient sorting but could render the cells useless for some applications such as organ on a chip or regenerative medicine. In practical terms, these conventional technologies do not align with what is needed in the research community, such as low energy consumption, short processing times, low cost, small liquid volumes, and portability. As a result, there is high demand for Microfluidics based sound sorting methods.

How Are Acoustic Waves Used in Microfluidics for Sorting Cells?

The acoustic waves are usually generated in three ways inside a microchannel filled with liquid. These are: Bulk acoustic standing waves (BASW)[10], Surface Acoustic Standing Waves (SASWs)[11], and Acoustic Travelling Waves [12]. BASW based microfluidic sorters have potential to generate faster acoustophoretic movement of particles than SASWs [13]. However, SASWs devices have greater precision for manipulating and positioning cells in the microfluidic channels [11]. Nevertheless, most work in particle sorting with microfluidics acoustophoresishas employs the BASW methods.

What is Primary Acoustic Force?

Formation of the acoustic standing wave (either BASW or SASW) in a microfluidic channel, results in Primary Acoustic Force (Fp) being exerted on suspended particles. To do so, there must be a difference in physical properties (density and compressibility) between the particles and their surrounding medium (e.g., fluid).

SASWs are generated in a similar fashion to BASWs using an interdigital transducer (IDT) coupled to the outside bottom of a microfluidic channel. The application of a voltage onto the IDT is used to generate SASWs that propagate along the surface of the microfluidic channel; the SASWs generate pressure nodes and antinodes in the liquid-filled cavity for particle separations [1].

Many of the medically-relevant applications of sound sorting with microfluidics involves concentrating biological entities with continuous flow. Concentrating biological entities (e.g., cells) with continuous microfluidics flow can improve detection sensitivity and reduce analysis time. Nordin et al., were able to show that their microfluidic chip design, which included 2-D BASW focusing and consecutive regions for concentration, could achieve a 200-fold increase in concentration for RBCs and prostate cancer cells [18].  They acoustically focused cells in a continuous flow to the center pressure node, while excess liquid was removed through the side outlet channels. Further, Jakobsson et al., engineered a microfluidic setup that merged BASW technology with a recirculating apparatus to achieve 1000-fold increase in concentration of RBCs and cancer cell lines (breast and prostate cancer)[2].

Label-free sorting of cells with sound in microfluidic channels relies on the properties of cells (e.g., size and F), only. The ability to sort cells without labeling is advantageous compared to traditional methods (e.g., FACS, MACS) because there is no need to  cell-surface markers (e.g., epitopes). These markers are absent or down regulated in specific cell types (e.g., epithelial derived cancer cells)[19]. The absence or down regulation of specific epitopes on cell types, can lead to the clinically-targeted cells being missed in separation assays that require labeling (e.g., antibodies, peptides) [20]. The acoustic cell sorting can fill the void here. An example of label-free sorting with BASWs is the enrichment of cancer cells from RBC-lysed blood containing WBCs. 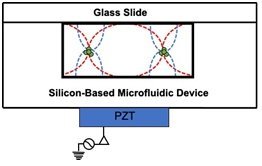 To achieve efficient separation of cancer cells from WBCs, Augustsson et al., implemented a pre-alignment channel that was used to focus a mixture of cells at pressure nodes in two dimensions: width (x) and height (z) (figure ).

This pre-alignment step allowed the trajectories of all cells in the stream to start from the same position (x-z) when flowing into the separation channel (figure).  The method ensures that cell populations would be separated solely on differences in acoustic properties (size and Φ) within the separation channel(figure)[20]. Using this microchannel configuration, several publications have shown cancer cell lines (breast and prostate) being efficiently separated from WBCs from RBC-lysed blood using acoustophoresis with BASWs [3, 20].This label-free separation occurs because larger-sized cancer cells focus faster to the center pressure node than WBCs in the separation channel; thus, if flow rates are optimized the WBCs will flow through the side outlet channel and cancer cells will be enriched in the collected middle fraction (figure ).

Learn how microfluidics technology is used to sort and separate cells.