Why Blood Cells Need to be Separated for Some Clinical Applications?

Blood contains cells, such as, red blood cells (RBCs), white blood cells (WBCs) and platelets. Blood in a human body is ~54.3% plasma, ~45% RBCs, ~0.7% WBCs, and ~ <1% platelets. Red blood cells are crucial for health in that they supply oxygen to the body. Further, WBCs play an integral role as immune cells, helping the body to fight off disease and infections. Along with RBCs and WBCs the blood also contains nutrients (vitamins, glucose, electrolytes, amino acids)[1], and platelets (thrombocytes) that are needed for blood clotting. Besides all of these crucial survival entities, blood also contains biochemical biomarkers (protein, metabolites, lipids) that can be used as diagnostic and prognostic indicators [2]. For example, several plasma proteins (e.g., PSA) found in patients’ blood, are commonly quantified using biochemical assays (e.g., ELISA, mass spectrometry) to assess the efficacy of specific therapeutic regimens [3,4]. Unfortunately, existence of cells in blood, mostly RBCs, significantly interfere with the detection of these biomarkers [5]. High numbers of blood cells in samples with medially-relevant biomarkers lead to a low signal-to-noise ratio (S/N); thus, removal of blood cells is necessary for obtaining accurate, sensitive, and reproducible measurements of biomarkers [6]. In addition, blood cells are inhibitive to many enzymatic reactions such as PCR. That is why most gold standard PCR testing require removal of blood cells from serum during the sample preparation step.

What Macroscale Methods Are Used for Removing Unwanted Blood Cells?

Centrifugation is the most common method for removing blood cells from plasma. 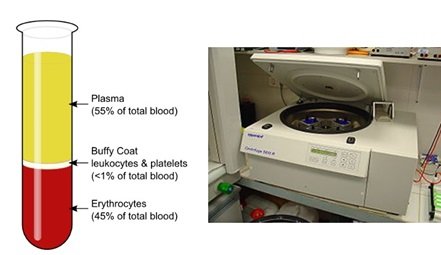 Centrifugation separates cells from plasma by generating an inertia force that pulls cells to the bottom of the tube to form a pellet. This process could damage the cell membrane causing hemolysis[7]. The RBC fragments that result from hemolysis can interfere with biomarker measurements performed on the supernatant (plasma). Other methods that are used for removal of RBCs are apheresis and density gradient centrifugation. However, both these methods use centrifugation as part of the process for separating out different blood cell fractions (e.g., RBCs, WBCs, platelets) from plasma. Additionally, the centrifuges are bulky and cannot be used as part of a portable point of care (POC) device to be used in the field. Centrifuges requires relatively large volumes of sample (1-50 mL), and they are quite expensive and not practical for use in resource limited areas [1]. Microfluidics, on the other hand, can assuage some of the limitations found with centrifugation for blood cell separation.

How is Microfluidics Used to Separate Cells in Blood?

Human Red Blood cells are about 7um in diameter. The white blood cells are 2-3 times that in size. This size range is very well within the scope of Microfluidics. During the past 20 years many microfluidic devices have been developed and fabricated to separate the blood cells. One can classify all these microfluidics concepts to two categories: Passive and Active methods [1]. Passive separation methods are performed in microfluidic chips without the application of an external field; whereas active methods are performed with the application of an external field[9].  Here we review these microfluidics based methods.

Passive microfluidic separation methods of blood cells rely primarily on the physical properties of cells including size, shape, deformability, and stiffness. These methods exploit microchannel geometry, flow rates, micro-obstacles, and hydrodynamic forces[1] for efficient separation. One of the most common passive microfluidic separation methods is based on cell retention using barriers (or filters) that operate on size-exclusion. The idea is that the fabricated microfluidic channel includes micro-obstacles (aka. filters) that restrict passage of blood cells into a tangential side channel, while only allowing the cell-free plasma to pass through to the side channels. VanDelinder et al., were able to design a microfluidic device with micro-obstacles with a gap size of 0.5 mm; this design allowed plasma to flow into side channels that excluded RBCs, WBCs, and platelets[10]. Others have used similar size exclusion methods inside microchannels such as integrated microporous membranes and porous filters [2]. These microfluidics methods show promise but there are drawbacks such as contamination of the collected plasma with lysed RBCs, due to RBCs being squeezed between the micro-obstacles. Another filter-based method uses microchannels packed with beads [2]. This method allows plasma, via capillary force, to flow between the packed beads while excluding most blood cells. This method has demonstrated minimal clogging, but operates with a slow separation throughput (flow rate) due to slow capillary action.

Sedimentation in microchannels is a another passive separation method that is used to obtain purified plasma. The sedimentation method is based on the density differences between blood components. The average density of blood components is: RBCs ~1100 kg/m3, WBCs ~1050-1090 kg/m3, and platelets ~ 1040-1090 kg/m3, and plasma ~ 1030 kg/m3. Sedimentation works because blood cells on average have a higher density than plasma. As a result of this, blood cells sediment overtime to the bottom of the microchannel, while the uppermost portion contains a purified, cell-free fraction of plasma with soluble biomarkers[11]. Once blood cells have settled to the bottom of the microchannel, the plasma in the uppermost portion can be shunted into the side outlet channels for collection of purified plasma. An advantage of this method is that clogging of microchannels with blood cells is reduced compared to filter-based methods.

To overcome the challenges of other passive microfluidic methods (e.g., clogging, throughput limitations) hydrodynamic-based methods have been implemented for cell separations in microchannels [12]. Hydrodynamic-based separations in microfluidic channels operate based on laminar flow streamlines in tandem with various factors (e.g., bio-physical properties of cells, microchannel geometry, and inertial effects). An example is the Zweifach-Fung effect (Bifurcation law)[13]. The Bifurcation law states that cells under a laminar flow profile at a bifurcation will have a propensity to flow into the microchannel with a higher flow rate[8]. As a result, the adjacent channel with a lower flow rate will contain a purified, cell-free fraction of plasma. Plasma separation from blood cells can also occur in a microchannel by applying the Fahraeus effect, which is also referred to as “plasma skimming”[8]. 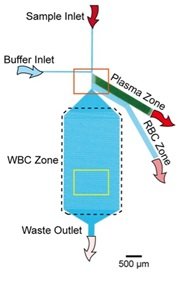 This effect is achieved with Poiseuille conditions that result in blood cells moving to the axial center of the microchannel with continuous microfluidics flow. This physical phenomenon leads to the area near the side walls of the microchannel to contain cell-free plasma. Once separated by the Fahraeus effect, the purified plasma can then be flowed into the side outlet channels. Additionally, other types of hydrodynamic methods take advantage of inertial effects that apply lift forces on blood cells within straight or curved microchannels[2]. These inertial effects push blood cells across stream lines to equilibrium positions that correspond to the channel geometry, cell size, and flow properties.

There are also reports of research combining different types of passive separation methods to separate out plasma, RBCs, and WBCs into individual purified fractions. For example, Kuan et al., have fabricated a microfluidic device allowing them to separate plasma from cells (figure 2)[9]. In their device the blood is flowed into a main microfluidics channel where the first side channel is packed with beads where only plasma and not cells can squeeze between them (effective pore sizes ~ 1.55 mm). As the blood continues to flow the next separation step takes advantage of the bifurcation law allowing for separation of RBCs and WBCs into individual purified fractions.

The three most common active microfluidics separation methods are acoustic, electric, and magnetic[2].

Separation of blood cells to obtain high quality plasma (<6.0 x 109 cells/L) can be performed using acoustophoresis (figure)[4]. Acoustophoresis produces sound waves in the microchannel where blood cells are forced to the middle (pressure node) with plasma able to flow out the side outlet channels. Once the plasma had been separated with acoustophoresis Lenshof et al., were able to quantify the amount of spiked PSA biomarker at clinical concentration levels using a porous silicon sandwich antibody microarray chip[4].

Another type of an active microfluidics separation method involves the use of electrical fields. For instance, the use of a dielectrophoretic field has been used for the separation of blood cells from plasma. The process works by subjecting polarizable cells to a non-uniform electric field. This dielectrophoretic (DEP) field results in a negative DEP force being applied on the cells that caused them to become trapped within the microchannel.[14] This trapping allows for purified plasma (98% pure) to continue flowing out of the chip unperturbed. Further, electro-osmotic flow (EOF) has also been utilized to separate blood cells from plasma (Figure)[15].

Magnetic separation has also been used for the separation of plasma from blood cells. Blood cells can possess paramagnetic properties in the presence of additives or after being passed through a gas permeable membrane. Passing the blood cells through this gas membrane allows them to become deoxygenated and reach their paramagnetic states [16]. The magnetic separation of blood cells from plasma in a microfluidic device was successfully performed in a continuous manner by Takasayu et al [16]. Currently there are few microfluidic methods that employ magnetic properties of blood cells for separation of purified plasma. Therefore, this remains an open field with lots of room for exploration.

Do you need to prototype or fabricate microfluidic chips to separate blood cells? Contact uFluidix!
Contact us

How electricity is used to separate cells in microfluidics.