What Is a Chemical Reactor? What Is It Used For?

A chemical reactor is a closed chamber or vessel in which a chemical reaction occurs. The main purpose of using reactors in chemical engineering and chemistry is to control the reaction conditions such as temperature and pressure. Reaction chambers in industrial scale are essential process components for the production of drugs, chemicals, or particles.

Is There a Need for Microfluidic Reactors?

Over the past few decades, Microfluidics has provided alternative approaches for chemical synthesis of molecules and materials. Microreactors have evolved over the recent years from proof of concept prototypes to commercial products in pharmaceutical and chemical synthesis industries[1]. The early types of microreactors, known as differential reactors, were designed in 1960 to measure catalytic reactions’ kinetics. Preliminary findings showed that the temperature and concentration gradient would be negligible in differential reactors due to the reactor’s small volume [1]. This feature allows more accurate measurement of reaction kinetics compared to. conventional reactors. The inherent gradient in ambient properties of batch reactors also affect their performance in achieving target molecular structures, such as a molecule that is modified at a specific site[2]. In addition, low level of integration and automation in batch reactors severely precludes their use in synthesis, screening, and optimization. Microfluidics therefore provides ways to overcome those shortcomings.

Doing chemical reactions in a microfluidic chip benefits from distributing and mixing reagents at a specified temperature, pressure, and time. In addition, microfluidic devices are specifically suitable candidates for small heat or mass transfer reactions due to their short diffusion paths. In the pharmaceutical and biotechnology industries, for example, enzymes and some biomaterials are produced in relatively small quantities [2]. Microfluidics reactors enables the continuous production of chemicals in small amounts while maintaining consistent quality; a common problem associated with batch production. Also, high surface-to-volume ratio in microfluidic channels results in the superiority of surface effects over volumetric effects and thus increases selectivity and performance. And finally, microfluidic platforms offer some unmatched advantages. For example, when radio-labeled tracers must be manufactured shortly before prescribing to the patient. Microfluidic systems provide a portable platform for on-site and on-demand drug production due to their small size. They can be used to rapidly replace and combine reagents to create a library of synthetic chemicals as well and such technology can be used to screen drugs and catalysts.

The safety management of chemical reactions in the industry is of utmost importance to avoid human and financial damage. Many industrial processes involve hazardous chemicals, which must be carefully monitored and controlled[3]. Microfluidics allows the safe use of small amounts of dangerous chemicals. Explosions can be avoided by safe management of temperature and pressure using small size microfluidic channels. Dangerous reactions, including overheating or exposure to harmful radiation, can also be done safer easily. It is worth noting that continuous synthesis in micro-reactors prevents the storage of reaction mediators that can be very unstable or toxic. Therefore, the continuity of microfluidic reactors plays a vital role in safety considerations.

If the chemical reaction needs flow transport, then manipulation and control of multiple input reagents using large volume pumps could be tedious. The pumping system becomes complicated when a person or system manipulates more than three reagents in the machine. Microfluidics enables easer manipulation of flow synthesis reactions via (i) temperature control by inserting thermal elements such as baths, (ii) flow rate control with programmable syringe pumps, (iii) control the flow path by changing the geometry of microreactors and (iv) containing the transfer of material by injection at precise intervals or through inputs at desired locations.

What are Microfluidic Microreactors Used for?

Micro-reactors have been demonstrated to be advantageous over traditional bulk reactors for the following applications. The list is growing as new microfluidic devices emerge on daily basis.

One of the challenging areas in inorganic chemistry is Liquid-Liquid extraction (LLE). For example, heavy metals have to be eliminated from effluents, or when actinides or long-lived radionuclides have to be separated. Usually, metallic species are extracted from water to organic solvents after chelation or formation of ion pairs. Although LLE is widely used in the transport of molecular or ionic species from one phase to another, some of its underling principles are not fully understood yet. Microfluidics can be used to optimize these processes by taking advantage of the liquids interface interactions, thanks to its inherent surface-area-to-volume ratio advantage[4].

The analytical applications of enzymatic micro-reactors can be categorized to two groups. The first group uses bio-catalysis to turn an analysis that is not easy to measure into a measurable form. Such Microreactors are designed to digest proteins to convert them into easier-to-measure peptides. Another example is the oxidation of glucose by glucose oxidase, followed by the measurement of the luminescence chemistry of oxidized luminol by hydrogen peroxide formed in the initial reaction. The second group of micro-reactors are designed to screen substrates, enzymes and study their kinetic in a continuous fluid microfluidic system.

The Enzymatic micro-reactors have been developed to facilitate routine work in biochemical analysis and are also used in biological research [5]. These micro-reactors work by fixing enzymes inside the micro-reactors. However, the limited amount of enzymes that can be fixed in the reactor’s bed and walls is currently a shortcoming of the enzymatic micro-reactors. So far, the following immobilized enzymes are used on an industrial scale: glucose isomerase, sucrose mutase, h-galactosidase, Penicillin ainaselas, diamino acid oxidase, glutarylamidase, thermolysin, nitrilase, aminoacylase, and hydantoinases [6].

Microfluidics approaches have several advantages over conventional methods for nanoparticle synthesis[7]. First of all, micro-reactors’ small inherent volume allows the use of expensive or toxic chemicals without the need for extensive inventory and processing volume. Second, heat transfer is high in these reactors due to the high surface-to-volume ratio [8]. Third, some reactions that are too fast to control in traditional reactors can be easily performed in microreactors. In addition, efficient mixing is a major advantage for the preparation of dispersed nanoparticles in microreactors, and microfluidic devices provide the potential for automation of multistage processes, such as the combination of analysis, reactions, and purification in the microchip. By using microfluidic microreactors, nanoparticles with a definite particle size, uniform size distribution, and desired structure can be formed.

Photocatalytic microreactors have received much attention because they allow precise control of performance variables and more uniform radiation behavior through the entire reaction space compared to conventional reactors[9]. Micro-reactors are also increasingly used in this domain because multiple iterations can be designed while saving expensive catalyst materials [10].  Micro-reactors are demonstrated to use ultraviolet Light (UV-A) in conjugation with water and oxygen as oxidizing agent to intensify photocatalytic reactions. [11].

A drawback for parallelization is when the microfluidics system becomes too sophisticated. The industry may still achieve higher throughput with reasonable system complexity by applying integration. This may be done in two ways: (i) internal integration to perform several parallel processes; (ii) External integration with other functional modules such as automation, online/in-line analysis, and feedback. These concepts have inspired the recent development of fully integrated and fully automated microsystems, exciting results in material screening, and self-optimization of continuous/discrete response variables. Micro-reactors’ scale towards high efficiency/stability helps to bridge the gap between academia and clinical/industrial translation[13]. 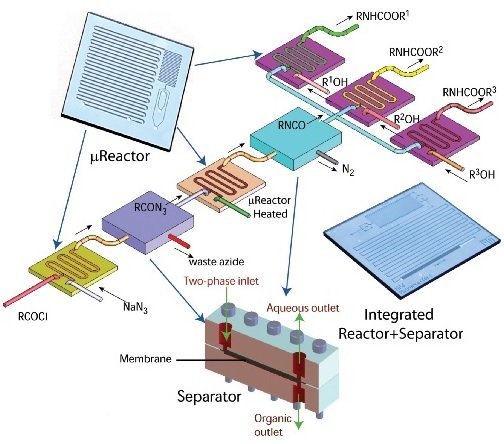 How to describe and design a Microfluidic channel.