Can Light Be Used to Manipulate Cells?

The 2018 Nobel Prize winners in Physics proved “YES”. During the past few years it has been shown that both coherent light (laser) and in-coherent light (ambient type light), could be used to manipulate biological cells. The most recent advances in micromanipulation tools and microfluidics have opened up new opportunities in the single cell analysis area. Now, behavior of individual cells can be interrogated and investigated precisely, while in the past they had to be aggregated or averaged.  This article summarizes common optical microfluidic manipulation techniques such as optical tweezers, holographic optical tweezers, and optically induced dielectrophoresis.

Traditional cell studies are conducted by analyzing statistical responses of large population of cells. This bulk approach fails to study physiological behaviors of those single cells who deviate substantially from the averages[1]. Fortunately several novel Optical Tweezers are under development to get the hold of the single cells. The current optical manipulation techniques can be classified into two major categories. The first category uses direct optical forces generated by optical gradient, or scattering. The second category relates to indirect optical approaches, such as optically induced dieletrophoresis.

The major advantages of optical approaches over other single-cell manipulation tools, such as acoustophoretic or magnetophoretic tweezers, are: a) flexibility, and b) less need to specially designed physical substrates. The flexibilities of the optical approaches allow real-time reconfiguration of the tweezers. For example, the optical patterns for cell manipulation can be dynamically adjusted to switch between various functions, such as isolation or transportation. On a flip side, low throughput is the main drawback of optical approaches for cell handling. Typical optical manipulators have working areas of less than a square millimeter due typical optical microscopy limitations. Although few recent research has been able to conduct highly parallel single-cell manipulation over hundreds of square millimeter, microfluidic chips with massively parallel manipulation capabilities are needed to reduce the operational cost for commercial adoption and success of the technology.

How Direct Optical Forces Are Generated, and Used to Manipulate Cells?

Direct optical force is created when photon energy is directly converted to mechanical force through an optical phenomenon such as refraction, via gradient or scattering of light. The optical tweezers using this strategy are three-dimensional optical traps that generate force on the order of 1-100 pico-Newtons, on 1-10µm particles [2]. Direct optical tweezers may use a single tightly focused laser beam to pass through dielectric particles, in which the refraction index difference between the particle and surrounding medium induces an optical gradient force. When the refraction index of the dielectric particle is larger than the surrounding medium, the dielectric particles move toward the focal point where light intensity is higher.

This figure illustrates how a dielectric particle being trapped by an optical tweezer. 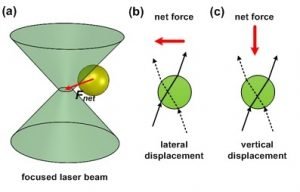 The difference in refraction index between particle and surrounding medium, along with the optical power of the trap, contribute to how tightly the particle is trapped. Typical light intensity of a single-beam optical tweezer is in the range of 106 Watt/cm2. To achieve these optics, the high numeric aperture (N.A.) objective lenses provide sufficiently high gradient in the light intensity. The high intensity of the light itself, on the other hand, could damage cells [3]. The damage threshold varies for different types of cells. It also relates to the amount of energy absorbed, and to the light wavelength. In practice, the damage threshold is quantified by measuring cell cloning efficiency, where cloning efficiency greater than 75% is considered safe[4].

How to increase throughput?

Throughput of single-beam optical tweezers can be improved by using multiple laser beams to generate several optical traps simultaneously. The multiplication of laser beams can be done by splitting a single beam to multiple locations by using acousto-optical deflectors (AODs)[5]. Diffraction efficiency in this approach is around 80%, which could limit the available power for trapping (Fig. (a)). Another method for increasing throughput is using scanning mirrors. These mirrors scan the working area at frequency of up to several kHz for trapping hundreds of dielectric particles in parallel (Fig. (b)) [6].  another type of laser beam splitting techniques are explored for holographic optical tweezers (HOT) (Fig. (c)).

In HOT, a diffraction pattern splits a single laser beam into several different beams for simultaneous and parallel cell manipulation. To control the HOT traps in real-time, spatial light modulators (SLMs) are used to generate holograms created by computer [7]. Between all these methods, HOTs have demonstrated larger working area in the order of few hundred square millimeters. These parallel optical tweezers can be used for the formation of microscale scaffold for microfluidic based tissue engineering or programmed cell cluster formation [8].

The optical nature of these tweezers enable them to be used in conjunction with imaging for applications such as cell sorting. For example, a camera or fluorescence detector can be installed in the optical paths in the microfluidic device. Once the targeted cells are detected by the imaging component of the optical system, the optical tweezers are actuated to deviate the flow direction of those cells to the desired on-chip locations or to desired flow trajectories [9, 10]. Although parallel and dynamic optical tweezers have been used in continuous-flow cell sorting, the throughput of less than 10 cells per second is not impressive enough for adoption of the technology for cell sorting applications.

Other than gradient forces, optical scattering force is also used for single-cell manipulation. Optical scattering force works by pushing dielectric particles or cells along the direction of a laser beam. Single-cell trapping was demonstrated by using dual beams from embedded optical fibers facing each other in a microfluidic channel[11]. Single-cell extraction out of microwells for further downstream analysis or disposal was also demonstrated using this approach[12].

How Indirect Optical Forces Are Used for Cell Manipulation?

Another approach for using light for cell manipulation uses indirect optical forces where the driving forces are generated by transduction of light, via mechanisms such as optoelectronic effects. 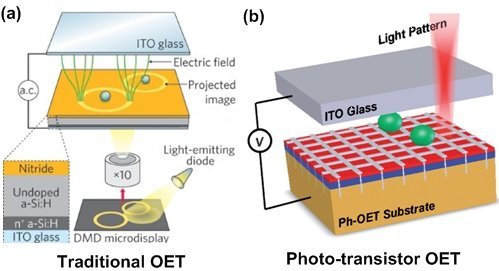 Because the light patterns shined on the photoconductive layer can be controlled in real-time, the induced virtual electrode pattern can take a desired shape at any given time. This fundamentally eliminates need for challenging micro-electrode fabrication. Furthermore, the light intensity required for OET is only in the range of 10-3 to 1 Watt/cm2. Compared to optical tweezers, this is at least 106 times different, which obviously relaxes the need for high-power laser or focusing optics. Similar to direct optical force methods; OET may allow visualizing the manipulated cells in microfluidic channels. OET is a fast growing topic with many active researches in the areas of cell sorting [16, 17], single-cell manipulation[13, 14], single-cell measurement [18, 19], electrorotation [20], and electroporation[21].

Do You Need to Custom Fabricate Optical Microfluidic Tweezers? uFluidix Helps!
Contact us

What does Electrokinetics mean? How it is used in Microfluidics to manipulate cells?