What Are Differences Between Prototyping and Manufacturing of Microfluidics?

It is confusing. Do you need a prototyping service or a manufacturing partner to fabricate your microfluidic devices. Here we explain the differences. We compare and contrast costs, lead time, and technologies used for each of those. We discuss the general suitable prototyping strategy. At the end of the article we remind the reader what is the most important consideration, which is often overlooked, in transitioning concepts to products in Microfluidics.

What is Microfluidics Prototyping?

Between all reasons, the most popular is when Microfluidic chips are prototyped to test their geometry to deliver a certain function. This is specially the case, if the device performance is largely dependent on its features’ size. Most famous examples of such functional devices are traps, micromixers, valves, in-line flow switches, active micro-particle separators (eg by use of electrodes or magnets), detectors, and cell culture on chip also known as organ-on-chip or tissue chips.

2. Prototyping For Evaluating Mechanics of the Micro-fluid

Prototypes are often needed to observe how the flow travels through or around different micro-features. Alternatively, prototyping is needed to analyze how the size of features such as width or depth affect the flow. Separately, if the design needs to employ a perfectly laminar, or turbulent flow in the microfluidic channel for proper functioning, then prototyping is crucial to determine what is the optimum channel design, or the flow rates. There are many questions about fluid mechanics in the device that a prototype model would help to understand  such as: Are there stagnation points in the design? Are there features that cause unnecessary flow resistance causing too high upstream pressure? Are bubbles formed or aggregated due to improper channel design?

3. Prototyping For Choosing Material for a Microfluidic Chip 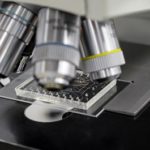 The microfluidic chip material must possess all necessary properties to allow the chip to work. To help with the material selection,  prototypes are built and suitability of candidate material is investigated. Four basic materials properties discussed here are optical, thermal, mechanical and chemical. We discuss how prototyping helps with material selection.

Optical Requirements for the Material

These include light diffusion (transparent or translucent), and transmission (what portion is not absorbed or reflected) at the wave length of interest such as Infra Red (IR), visible, or UV light. IR may be used for heating or sensing of liquid inside the microfluidic chambers. UV light excitation could be used for fluorescence detection, or for synthesizing polymers.  Visible light range is used for imaging.  There are other optical properties of interest in microfluidics that could be examined in prototypes such as light polarization, or laser properties. Alternatively, prototypes may need to be built to assess designs for optical guides where channels are filled with a resin and cured to be used as embedded fiber optic.

Thermal Properties of the Material

Prototypes are also necessary to model microfluidic devices where heating or cooling is involved. For example in heat-exchanger designs. Also the designer may need to know about the heat conductivity of the chips when there is an exothermic reaction inside the microfluidic chamber, otherwise the microfluidic chip might melt. On the other hand, there are many examples where heat is applied to the reaction such as for PCR chips, or when heat is built as a result of UV curing. The chip material must withstand these conditions. Mathematical modeling complemented by prototype testing must be used to optimize the design for such thermal considerations.

Mechanical Properties of the Material

Is the chip material strong enough to withstand internal pressures? Is the PDMS formulation used to make a membrane flexible enough to allow necessary deformation for a valve function?  Is the COC or acrylic plastic used for the device too brittle? What is the proper thickness of the PDMS chip to allow proper sealing of tubes in the port? What is the thinnest PDMS layer as a free standing cover layer? And many other questions which are usually answered by microfluidic prototypes.

The material of the chips must be compatible with the fluid and whatever the fluid carries. Unfortunately there are limited number of materials used in Microfluidics, and too many types of fluid. Sometime the liquid is not compatible with the chip material in general, which then could limit the options for the material selection. But one needs to consider the usage conditions before ruling out a candidate chip material. For examples thermoplastics such as PMMA or polycarbonate are not compatible with most solvents. Or PDMS swells in most solvents. So if the fluid in the microfluidic chip needs to be a solvent such as acetone as part of an extraction protocol should we rule out these polymers? The answer is not so straightforward. Often solvents can pass in a microchannel for a short time with an “acceptable” interaction. In such cases, prototypes are built to study channel and media interaction and make a decision about the material choice for the specific usage conditions.

4. Prototyping For Visualizing Stability of the Flow

Sometimes the flow in the microfluidic channels need to be stable meaning it should not vibrate, pulsate, or exhibit backflow at nominal flow rates. Alternatively, if a particle such as C-Elegans, cell or organoid needs to be immobilized for imaging or gene delivery, then the design needs to be able to provide the necessary immobilization. As a different example , flow focusing droplet generator devices need stable flow, otherwise non-uniform droplets are made. These effects are difficult to be mathematically modeled, and therefore prototyping is a way to go.

5. Prototyping for Surface Characterization of the Microfluidic Device

Surface properties such as molecular adsorption, hydrophobicity/hydrophilicity, surface interactions such as electrical dipole properties or covalent or Van der Waals bonds between surface and molecules of the liquid, can often be tested at the bulk material level. This means a microfluidic prototype might not be needed to test these. However, the same surface could act differently at small size scale, or when combined with shear forces resulted from very fast flow rates or boundary layer conditions. If the design function can be affected by surface properties then prototyping and testing the surface is strongly recommended.

Sometimes an assay that works perfectly reliable in petri dish, Falcon tube, 96 well plate, or a PCR tube, does not behave nicely in microfluidic chips! These could be due to many factors, such as flow conditions, non-mixing due to small size effect, device contamination,  improper oxygen or nutrient transport, protein absorption, trapped dead cells, and many more. Therefore devices are prototyped to investigate assay performance in real life chip conditions.

7. Prototyping to Check Cell Viability and Behavior in the Microfluidic Device

Cells communicate while cultured. This could be between different cell types in an organ on a chip device or even between the cells of the same types. The way the cells communicate in a microfluidic devices is very different than in a petri dish. Cells behavior could be strongly affected by the device design, channel sizes or shear flow conditions. Therefore devices are prototyped first to have a better understanding of the cells behavior in the microchannels  before committing to more complex designs or finalizing protocols.

8. Prototype the Whole Microfluidic System All Together

Microfluidic devices could be as simple as a straight channel, or as complex of a multi chamber cartridge, where several lyophilized reagents need to be soaked and mixed at different stages of the device’s function. Therefore, after the components are finalized, many more complex prototypes need to be made to ensure the whole microfluidic cartridge works reliably from start to finish under different environmental or usage conditions.

9. Prototyping to Find Out Consequences of Manufacturing Limitations

Prototypes are also made to asses manufacturing limitations. For example what is the effect of alignment tolerance in a multilayer device on its performance? Or what is the relationship between maximum pressure a device can tolerate to its features’ geometry.

What is a Good Strategy for Prototyping Microfluidic Designs?

Based on our experience the most efficient strategy to save time and money, is to first prototype the design in component level, then add the components to fabricate more advanced models of the microfluidic system. For example consider a diagnostic cartridge with two micromixers, three valves, and two reaction chambers. In this case it is a good practice to prototype the chambers, mixers, and valves separately. The design parameters of each of these components could be independently optimized with few prototypes of their own. Once all components are fine-tuned, then they can be joined step by step. For instance, here, the valve and mixers could be initially added to build a model prototype to examine flow switching  and mixing. Then, the chambers may be added to the rest to complete the cartridge for final testing.

Which Technologies are Suited for Prototyping vs. Manufacturing of Microfluidic Devices?

What is Cost for Prototyping vs Manufacturing of Microfluidics

Each iteration of microfluidics Prototyping could cost few hundreds to few thousand dollars.

What is Lead Time for Prototyping vs Manufacturing Microfluidics

Prototyping could be made between 2 days- 4 weeks

Manufacturing line could be set up between 2-6 months.

I Am Making 100 devices. Am I Prototyping or Manufacturing?

It doesn’t matter how many devices or replica of a device you are making. As long as you are fabricating devices to learn about your own design or device, you are prototyping. This could be one or thousands. On the other hand, if you fabricate devices to pass them on to a user or a client so they could overcome their own challenge or need, then you are manufacturing. This could be one, or millions.

A prototype that could perfectly model your microfluidic design, does not tell you much about how suitable the design is for manufacture. It is most important to have a minimum understanding of your final manufacturing process at the get go. At initial stages, once you predefine how your product would be manufactured,  then you may proceed to design and prototype such that it reasonably resembles the final product.  Unfortunately we have seen, too frequently, microfluidic designs that work perfectly in prototype level, but fail in manufacturing stage. We, as a leading Microfluidics manufacturer, have seen how some companies burned hundreds of millions of investment dollars, and became unfortunate examples of failure due to manufacturing strategy mistakes.

Need to Prototype or Manufacture Microfluidic Chips and Devices? uFluidix can help!
Contact us

Should I Buy Custom Made Chips or Fabricate Myself?

PDMS chips are not difficult to fabricate. So should you buy, or DIY?

How to Fabricate Microfluidic Devices