What Are Exosomes? What Size Is An Exosome?

Cells communicate with their micro-environment through multiple mechanisms. One mechanism relies on the production and secretion of extracellular vesicles (EVs). EVs are membrane-bound structures released by most cell types. Exosomes are a sub-type of EVs containing various critical biological molecules such as lipids, proteins, messenger RNAs, microRNAs, and non-coding RNAs. They are distinguished from other EVs by their unique intra-cellular biogenesis. Exosome size is 20-100 nm, and they are cup-shaped.

Are Exosomes Used For Diagnostics Purposes?

Exosomes carry various essential macromolecules, they are considered promising biomarkers for disease diagnosis. Especially, because they could be found in body fluids such as blood, semen, plasma, saliva, or urine, isolating or capturing them is an attractive, non-invasive approach for disease diagnosis and monitoring.

What Are Conventional Techniques for Separation and Collection of Exosomes?

How Does Microfluidic Exosome Isolation Work?

Microfluidics-based techniques mainly rely on physical features of exosomes, such as size and density, or rely on their chemical

As an example of the active separation approach method, Zhao et al [9] use magnetic force for the separation of exosomes. Their ExoSearch chip consists of a Y-shape inlet channel, followed by a serpentine mixing channel and then a microchamber. The method uses immunemagnetic beads. The sample and immunomagnetic beads are injected in each branch of the Y-shape microfluidics channel separately. The immunomagnetic beads blend with the sample in the micromixer area, and the exosomes adhere to the beads. The magnetic beads (loaded with exosomes) are then captured and collected in the microchamber using an external magnet.

Alternatively, an example of size-based passive exosome separation approach is nano-porous based membranes similar the conventional

ultrafiltration methods. The nanoporous membrane function is to allow particles with sizes smaller than the nanopores such as exosomes to pass through and separate from EVs. Using other structures than nanoporous membranes have also been reported. To illustrate, is the work of Wang et al [10] in which a microfluidic device has been devised consisting of ciliated micropillars. The microfluidics device has been used to isolate and trap exosome-like lipid vesicles while allowing smaller proteins and larger nanoparticles with the size of cellular debris to pass. The captured lipid vesicles can be released by dissolving the cilia.

Deterministic Lateral Displacement (DLD) is a continuous-flow microfluidic particle separation method discovered in 2004 that has been applied successfully and widely to the separation of blood cells, yeast, spores, bacteria, viruses, DNA, droplets, and more [11]. A standard DLD array is made of a flat microfluidic channel filled with a regular array of micropillar obstacles, tilted at an angle that generates unique flow streamlines [11]. In a laminar flow, streamlines result in size-based separation [12]. Particles with a diameter less than the critical diameter move in a zig-zag mode. Large particles (diameter > the critical diameter) cross the streamlines and displace laterally in bumping mode. Nanoscale DLD arrays of uniform gap sizes ranging from 25 to 235 nm [13] have been used to separate fluorescent-labeled human-urine-derived EVs into two fractions. However, the microfluidics device required high pressure due to the dense array structure and had a limited throughout.

Acoustophoresis is another active method to sort and separate particles which uses sound waves. A standing sound wave is usually 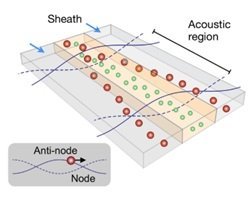 generated over the cross-section of a microchannel, i.e., orthogonal to the direction of flow. The wavelength is tuned, such that there is a node in the center of the channel and two anti-nodes at the edges. Then, particles move either towards the node or towards the anti-node depending on their size[14]. Such waves can be generated, for example, with piezoelectric transducers. The acoustic nano-filter has been used to isolate nanoscale (<200 nm) vesicles from cell culture media as well as microvesicles (MVs) in stored red blood cell products[15].

Dielectrophoresis (DEP), on the other hand, employs a nonuniform electric field to induce a force that depends on a particle’s electric dipole. Particles are polarized and could experience a dielectric force [12]. The net drag force is either in the direction of higher (positive DEP) or lower (negative DEP) electric field strength depending on the relative polarizability between the particle and the surrounding media[16]. The dielectric force is related to the size and electrical properties of the particles, the electrical properties of the surrounding medium, and the frequency and intensity of the applied electric field[17]. Ayala-Mar et al prototyped and demonstrated a microfluidic device consisting of a channel with two electrically insulating post sections for exosomes isolation. In each section, different nonuniform spatial distributions of the electric field are generated and, therefore, various dielectrophoretic forces act on exosomes. Side channels were placed adjacent to each section to allow sample recovery. By applying an electric potential difference of 2000 V across the length of the main channel, dielectrophoretic size-based separation of exosomes was observed in the microfluidics device.

What Are Challenges of Using Microfluidics For Exosome Isolation?

Although Microfluidics helps to differentiate, capture, enrich, and isolate particles of different size and shape, exosomes are very difficult to deal with due to sub micron size. The major challenge in exosome separation is to achieve high-throughput separation, with high purity and high recovery rate, and minimal damage. Although there has been significant progress, it is clear that none of the existing microfluidic techniques for exosome separation are faultless. For example, the presence of many thousands of micropillars leads to very low throughput and channel clogging issues. Furthermore, for these nano-size particles, the effect of diffusion is very prominent, which reduces the separation efficiency by having a large distribution of particles in the outlet channel [12].The recovery procedure using trapping exosomes in porous structures is currently time-consuming (over one day). Acoustic microfluidics separations has become interesting mainly because no physical contact required between the ultrasonic transducer and the liquid. Also, throughput in this method can be relatively high. The method, however, is not applicable to small exosomes, given that the acoustic force is proportional to (particle radius)3. DEP, on the other hand, has Advantages in attracting and repelling small particles, and no prior tagging is required for manipulation. However, Joule heating and electrothermal heating significantly affect the separation performance.

Overall, considering that current conventional exosome isolation techniques require significant capital and maintenance costs, microfluidic-based exosome isolation approaches are promising and could be cost-effective. They could be deployed in a large number of clinics and hospitals, and resource-scarce settings.

Do you need to fabricate microfluidic prototypes for exosome research? uFluidix is here to help!
Contact us

How electricity is used to separate cells in microfluidics.