What is Flow Cytometry?

How Does Flow Cytometry Work? What Is It Used For?

Most Flow Cytometry methods use light scattering to characterize the cell populations. To do so, forward scatter is mainly used for size based characterization, while side scatter explores cell granularity [4]. The granularity of a cell is proportional to the amount of “stuff” (e.g. organelle) inside the cell’s cytoplasm or nucleus[4].

Alternatively, to enhance detection and discrimination of individual cell populations, cells can be specifically labeled with monoclonal antibodies (mAb) or dyes that are conjugated to fluorescent molecules such as fluorescein[1].

Flow Cytometry is also used for enumeration of cells such as circulating tumor cells( CTCs)[5], cell sorting[6], detecting microorganisms[7], protein engineering[8], and microbead-based assays for medically-relevant work such as extracellular vesicles[9]. In addition, the use of bead-based flow cytometry is common for protein biomarker quantification in blood-based samples[10].   Immunophenotyping is another applications of Flow Cytometry in which the expression levels of proteins on the surface of cells or intracellularly is quantified. In this method, cells are specifically labeled with fluorescent antibodies, and investigated [11]. An example is the expression of tumor markers that are used in the diagnosis of leukemia[12]. Another, pertinent application is the use of flow cytometry for measuring the number of CD4 cells present in blood samples from patients infected with HIV/AIDS[13]. Immunophenotyping and enumeration of cells with FC is now commonly used in the medical diagnostics field; and is important for monitoring the efficacy of specific therapeutic treatments over time such as HIV Antiretroviral treatment [13].

A standard benchtop flow cytometer is composed of three major systems: a) fluidic system; b) optics system; c) and an electronic system [1,4]. It works by driving a homogeneously distributed suspension of cells or microparticles into the fluidic circuits. The flow is then hydrodynamically focused into a tight stream using sheath fluid. By optimizing the flow rates, a stable stream of cells enter the flow-cell in single-file. This single-file configuration allows for accurate and sensitive interrogation of the individual cells one by one using the optics system. Inside the flow-cell, the focused cells are illuminated with a light source such as an Argon 488 nm laser.  The emitted fluorescence and scattered light (forward and side scatter) are filtered and guided using bandpass filters and dichroic mirrors. The emitted and processed fluorescent signals are then collected by detectors such as photomultiplier tubes (PMTs). As these detectors convert the processed fluorescent and scatter light into a readable format, the signal is continuously transmitted to a computer workstation.  Commercial flow cytometers have analysis rates as high as 50,000 cells/s [14]. The current bench top flow cytometers are quite large, and not portable. They also require large amounts of liquid sheath [15]. Additionally, the high prices of benchtop flow cytometers make them unaffordable in resource poor areas of the world. To circumvent these drawbacks, several companies are developing novel portable microfluidic flow cytometers, that can also be used for point-of-care (POC) diagnostics.

What Is Microfluidic Flow Cytometry?

It may look a daunting task but during the past decade researchers have been able to fit all the necessary components of a typical flow cytometer in portable bench top platforms. This has been possible with the help of Microfluidics where stable laminar flow may be achieved using a clever microfluidic channel design under optimized flow rates [16]. This laminar flow profile enables precise spatial and temporal positioning of cells in microchannels. The fine-control over the cells’ spatial and temporal positioning facilitates the detection, mixing, counting, and lysing of cells on-chip. However newer techniques compared to what is used in the traditional flow cytometry are needed to enable the microfluidics integration to work.  An example is the work of, Göröx et al., who fabricated an image-based microfluidic flow cytometer for detection of toxic algae in water samples[17]. Their microfluidic chip is small, but the accompanying components such as optics or electronics are relatively large and limit the portability of the whole system.

A microfluidic flow cytometer for truly POC applications, should have a very efficient design including only necessary components for the system to function[18]. This can be a formidable task since flow cytometers need all the fluidics, optics, and electronic components for proper functioning. The fluidic system including pumps, valves, manifolds and tubing must be as efficient as possible. Additionally, lasers, and other bulky electronic system components must be designed in very smart ways to reliably work for POC applications. 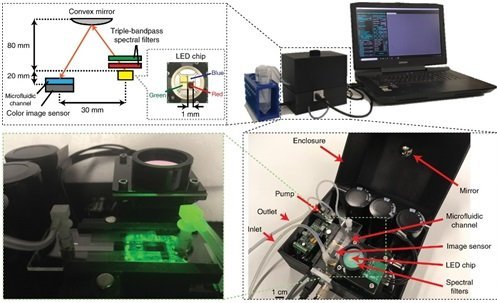 The microfluidic device needs to be able to dilute the cell suspension to low concentrations to a) prevent coincidences form happening in the analysis volume; and b) to reduce the event rate (signal acquisition) to a level that can be handled by the electronic system[19].

Cell suspensions in buffer are normally delivered to the microfluidic flow cytometer using pumps [14]. However, to reduce the off-chip parts, which can limit portability; the pumping systems may be integrated into microfluidics cartridge. For instance, electrophoresis and electro-osmotic flow, along with on-chip peristaltic pumps and pneumatic channels can be integrated to push cell suspensions through the microfluidic flow cytometer[20, 21,22, 23].

Are There Microfluidic Flow Cytometers on the Market?

Currently the flow cytometry industry is worth around 3 billion US dollars, and includes +100 companies involved in the selling and manufacturing of flow cytometers and their chemical reagents[15]. Additionally, in this industry, there is a projected compound annual growth rate (CAGR) of 10-12%[15]. Microfluidic flowcytometers are positioned to capture a significant share of this market, as well as creating new market for POC flowcytometry. To realize this potential these product requirements must be met. size: Obviously the POC flow cytometer need to be easily portable; cost: The system and its consumables must be much cheaper than current bench top systems, at least an order of magnitude. operation: setting up, maintenance and running the device should be straightforward and rapid for non-experts; performance: measurements should be accurate, sensitive, and reproducible.

Though there are several microfluidic flow cytometers on the market, there is still significant progress needed before they are ready for POC applications especially to reduce size and cost. Integration of PDMS membrane-based micromixers, microvalves, and micropumps may help to reduce the size, cost, and complexities of commercial microfluidic flow cytometers. Overall, there remains a sizable niche to be filled in this domain.