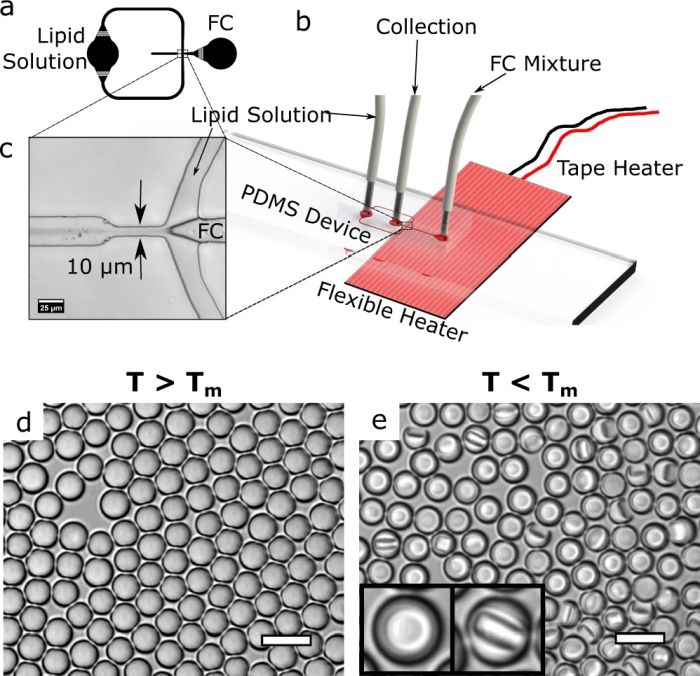 28 Feb Acoustic manipulation of endoskeletal droplets on a microfluidic platform

Posted at 12:40h in Latest Research by Pouriya Bayat

As droplet microfluidics progresses, more sophisticated applications get developed by researchers which in turn require more complex techniques for manipulation. One class of such droplets is endoskeletal droplets. Endoskeletal droplets are complex colloids in which a solid phase is cast within a liquid emulsion. This solid phase facilitates more controllability over the shape and the orientation of the droplets in response to external stimuli. In this week’s research highlight, we will introduce a microfluidic chip that enables researchers to manipulate disk-in-sphere endoskeletal droplets using acoustic waves to form clusters.

“Manipulation of internal structure of droplet/particle is rarely explored and remains challenging due to its complicated nature. Here we demonstrated the manipulation of internal structure of disk-in-sphere endoskeletal droplets using acoustic wave. We developed a model to investigate the physical mechanisms behind this interesting phenomenon. Theoretical analysis of the acoustic interactions indicated that these assembly dynamics arise from a balance of the primary and secondary radiation forces.”, the authors explained.

“a Design of the Microfluidic Channel used to generate droplets. b Droplet generation schematic showing the PDMS device and different inlets and outlets. Zoomed in image of the flow-focusing junction is shown in c Scale bar, 25 μm. d Endoskeletal droplets generated using this technique at a higher temperature (T > Tm) are single-phase liquid droplets where the solid disks are all melted. When the droplets are cooled to a lower temperature (T < Tm), the solid phase separates and forms the endoskeleton confined by the droplet boundaries (shown in e). The disks are randomly oriented with different orientations. Parallel orientation and perpendicular orientation of the disk are shown in the image inserts where the disks are seen as circle and rectangle respectively. Scale bar, 20 μm.” Reproduced under Creative Commons Attribution 4.0 International License from Shakya, G., Yang, T., Gao, Y. et al. Acoustically manipulating internal structure of disk-in-sphere endoskeletal droplets. Nat Commun 13, 987 (2022).

Having transferred the endoskeletal droplets to the microfluidic chamber, the team then exposed them to acoustic waves. The surface acoustic waves (SAW) with a center frequency of 20 MHz were generated to examine the effect on the collective behaviour of the droplets. It was shown that the droplets formed clusters as soon as the SAW was turned on. Depending on the number of droplets in the cluster, the orientation of the droplets changes with respect to the substrate.