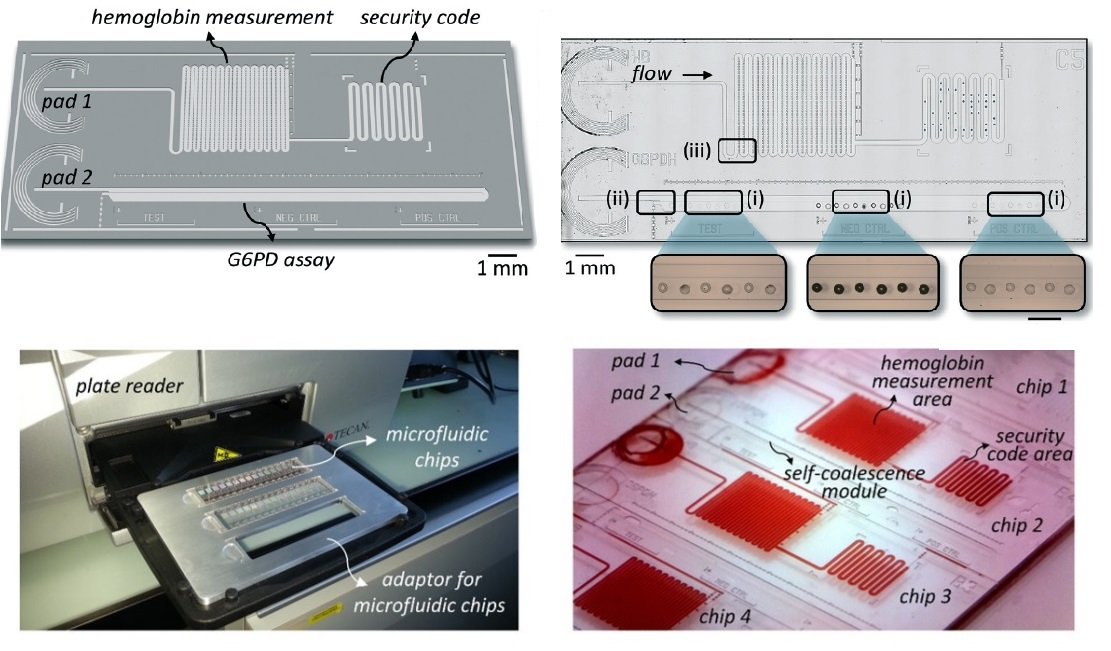 Posted at 19:15h in Latest Research by Pouriya Bayat

Passive microfluidics, such as capillary-driven microfluidics, are excellent candidates for point-of-care applications. A passive method for delivering reagents to the device and performing reaction is advantageous in terms of cost and portability compared to active methods where an external means is employed for this purpose. Bulky pumps, for example, can increase the cost and reduce the portability of a point-of-care microfluidic device. This week’s research highlight focuses on a capillary-driven microfluidic device for rapid quantitative assays for glucose-6-phosphate dehydrogenase (G6PD) and hemoglobin combined.

“Rapid tests for glucose-6-phosphate dehydrogenase (G6PD) are extremely important for determining G6PD deficiency, a widespread metabolic disorder which triggers hemolytic anemia in response to primaquine and tafenoquine medication, the most effective drugs for the radical cure of malaria caused by Plasmodium parasites. Current point-of-care diagnostic devices for G6PD are either qualitative, do not normalize G6PD activity to the hemoglobin concentration, or are very expensive. In this work we developed a capillary-driven microfluidic chip to perform a quantitative G6PD test and a hemoglobin measurement within 2 minutes and using less than 2 μL of sample. We used a powerful microfluidic module to integrate and resuspend locally the reagents needed for the G6PD assay and controls. We also developed a theoretical model that successfully predicts the enzymatic reactions on-chip, guides on-chip reagent spotting and allows efficient integration of multiple assays in miniaturized formats with only a few nanograms of reagents.” 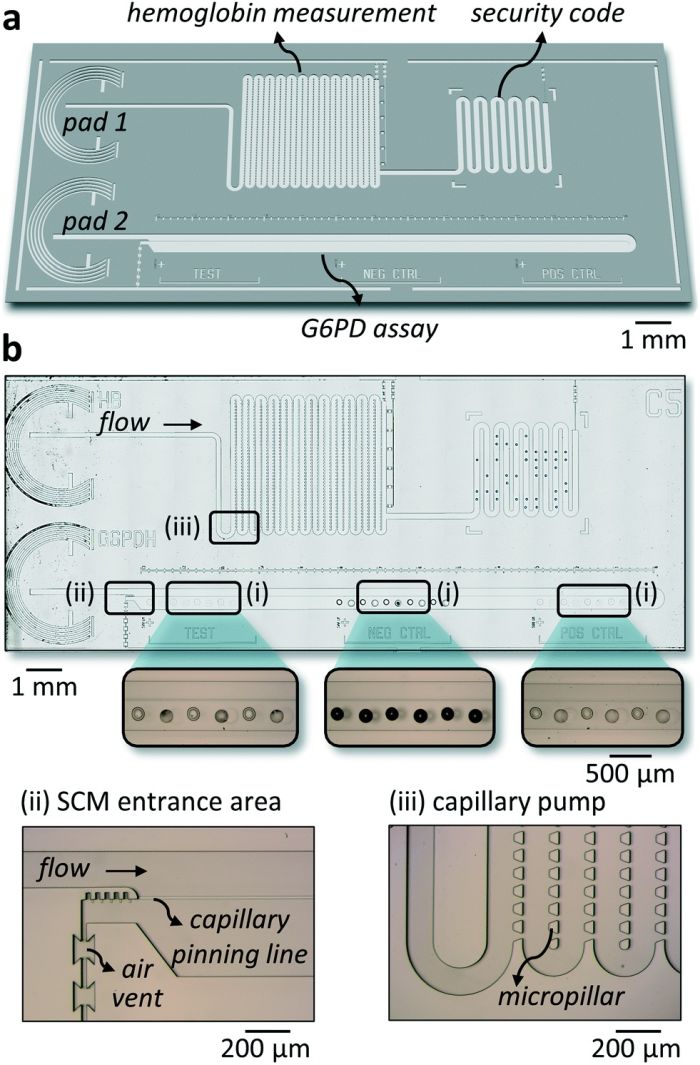 The proposed microfluidic chip for the combined hemoglobin and glucose-6-phosphate dehydrogenase (G6PD) assay is composed of two independent flow paths. Each path has a loading zone in which the samples will be loaded via a loading pad. The loading pad is connected to a microchannel in which the embedded capillary pumps help with the passive pumping of the liquid through the microchannels. These micropillars, also known as capillary pumps, ensure steady filling of the microchannel as well as prevent bubble trapping. For the hemoglobin assay, the lysed blood travels through a spiral hemoglobin measurement section, where the absorbance of the sample is measured and correlated to the hemoglobin concentration. The microfluidic chip is microfabricated on a glass substrate and thus allows the wavelength required for hemoglobin measurement through the device. The hemoglobin measurement section is followed by another spiral microchannel that serves as a security code area. Here, spots of randomly deposited inkjet dyes provide a security code that can be image using a macro lens and analyzed using a python code. 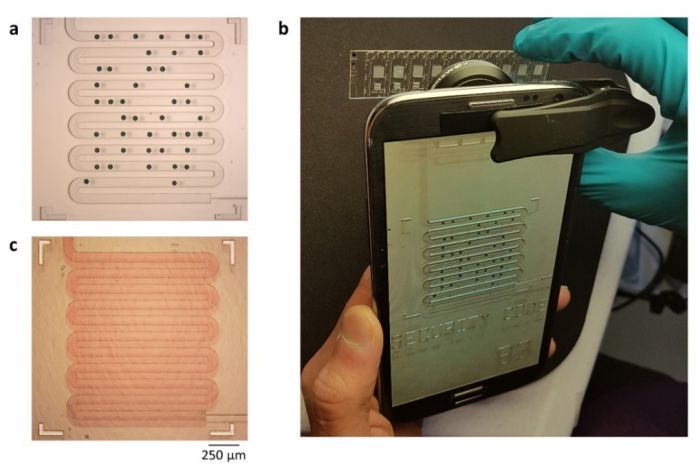 “Comparing our method to the “gold standard” spectrophotometric assay, we note that our test is around 10 times faster (<2 min vs. 20–30 min),59 works with less sample volume (<2 μL vs. 10–500 μL)59,60 and requires fewer steps to be performed by the user. Moreover, our test can measure the concentration of hemoglobin directly on the same chip, while in the gold standard approach, the hemoglobin is measured separately. In the next development iteration of our test, sample preparation steps such as cell lysis and sample dilution could be integrated directly on-chip.”