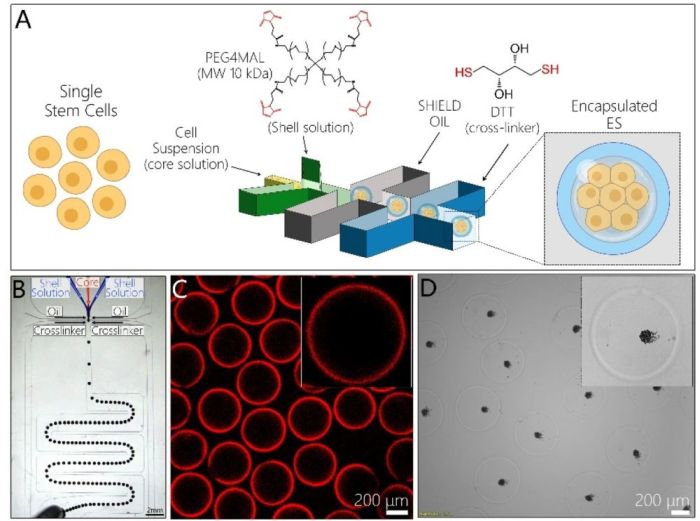 Posted at 18:44h in Latest Research by Pouriya Bayat

.Double emulsions are core-shell droplets that often have an aqueous droplet within a larger organic droplet or vice versa that are usually made using droplet microfluidic chips for uniform production. They have found many applications in microfluidic cell culture, bacteria culturing, protein synthesis, etc. The outer shell can be used to feed a reaction/culture with nutrients (or a novel formulation for drug screening assays) in the inner core and removes the waste from the reaction.

Stem cell therapies have the potential to be employed for treating many hard-to-treat diseases. A recent advancement in the microfluidics domain takes advantage of double emulsion for the formation of spheroid from human pluripotent stem cells.

“We demonstrated successful encapsulation, spheroid formation and high viability for three different hPSC lines. Using one of the hPSC lines we demonstrated maintenance of pluripotency and successful differentiation of stem cell spheroids into β-cells. In addition, we combined a microfluidic encapsulation with a dissociation/filtration module to ensure that ~ 90% of microcapsules contained spheroids. Additional experiments were carried out to demonstrate that microcapsules were protective against shear stress during cultivation in a stirred bioreactor/spinner flask.”, the authors elaborated.

The inner core consisted of an aqueous phase in which the target cells were encapsulated. The outer shell was made of PEG and subsequently crosslinked to form a hydrogel shell around the core and the double emulsion was immersed in an oil phase. The PDMS microfluidic chip used for generating the double emulsion was microfabricated using multi-step photolithography in order to have multiple heights to accommodate for the size difference of the inner and outer droplets. The final microfluidic chip had a first layer (for delivering the aqueous core solution) with a height of 100 µm, the second layer (for aqueous shell solution) 200 µm, and the third layer (for oil phase) 300 µm.

A major challenge when it comes to cell encapsulation is to make sure a maximum number of droplets contain a cell. According to Poisson statistics, a large number of droplets can end up having no cells. In order to address this and improve cell-seeding into the capsules, the research team employed a single-layer microfluidic device for dissociation/filtration of cell clumps. The microfluidic dissociation chip consisted of an array of PDMS posts that trapped the cell clumps and dissociated large cell aggregates. The dissociation chip resulted in increasing the percentage of the droplets containing cells from 57% to 90%.

The microfluidic encapsulation of the stem cells inside double emulsions was shown to be successful in formation of highly viable spheroids. Additionally, the spheroids were assessed for pluripotency and differentiation potential by directing them towards Β-cell lineage. The spheroids were shown to express markers and functions of pancreatic cells.

“In the future, the microcapsules may be further improved for ease of hydrogel degradation/spheroid retrieval as well as for controlled loading and release of inductive signals. The microcapsules may also be used as vehicles for transplantation of stem-cell derived adult cells into immune competent animal models.”, the authors concluded.