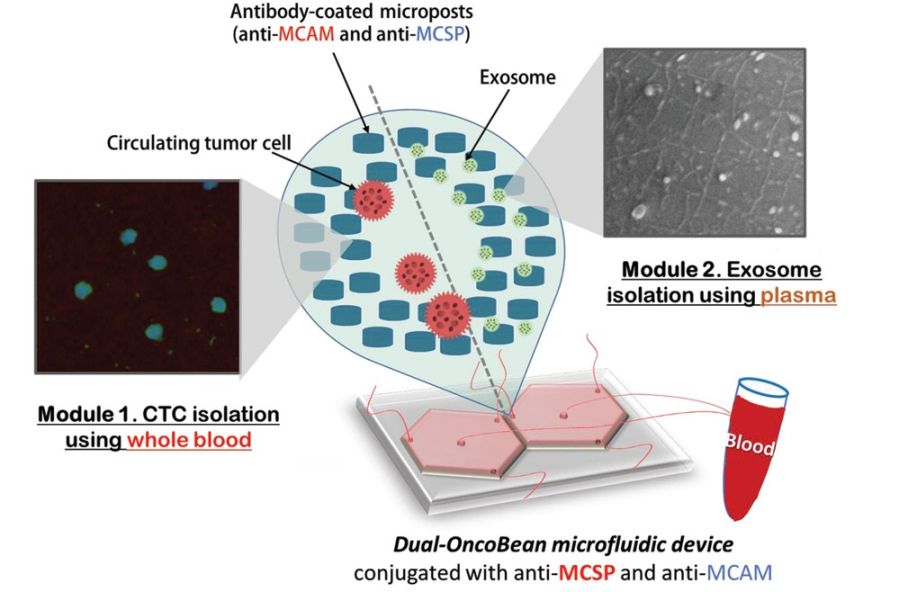 Posted at 16:29h in Latest Research by admin

The survival rate in melanoma, like other cancer types, is highly dependant on the stage at which it is discovered. At the early stages, 89% of the patients can survive. However, in metastatic cases, the 5-year survival rate significantly drops to 5-19%.

This recent article entitled “Dual-isolation and profiling of circulating tumour cells and cancer exosomes from blood samples with melanoma using immunoaffinity-based microfluidic interfaces” published in Advanced Science Journal highlights the work of University of Michigan researchers on employing microfluidics for simultaneous detection of CTCs and exosomes at low concentrations. More details about microfluidic isolation of circulating tumour cells and exosome detection can be found on our website.

“Here, we devised the dual utilization of OncoBean (DUO) microfluidic device conjugated with melanoma-specific antibodies, MCAM and MCSP, for capturing circulating markers in an immunoaffinity manner and applied this device to the isolation of both melanoma CTCs (MCTCs) and melanoma exosomes (MExos). As both markers originate from the same tumor sites, coexpression of surface markers allows for identical enrichment strategies.”, the authors elaborated.

Design and working principle of the chip

The device included two separate sections; one for isolation of the circulating tumour cells and one for isolation of cancer-shed exosomes. Each section consisted of a radial microfluidic chip with bean-shaped microposts. The microfluidic devices were covered with antibodies that target melanoma-specific circulating markers. Preliminary tests with two melanoma-specific antibody candidates, anti-MCAM and anti-MCSP, were tested to find the optimal reagent. A mixture of both was selected for functionalizing the microchannels to capture potential melanoma subtypes expressing any of the associated antigens. The flow rate was also optimized for the highest capture efficiency which resulted in a 1 ml/hr flow rate.

The preliminary tests with melanoma cells and exosomes spiked in PBS buffer had promising outcomes and were thus followed with clinical sample tests. The microfluidic device was tested with samples from stage I-IV melanoma patients and healthy donors and could show that the patients had ~5 CTCs per mL as opposed to no CTC in healthy donors. Additionally, the RNA content of the captured exosomes and circulating tumour cells were tested. It was revealed the exosomes had a higher RNA concentration and therefore can be a potentially more efficient marker.

“Overall, the ability to isolate MCTCs and MExos with high sensitivity as high throughput from melanoma patient blood samples provides clinicians a powerful and versatile tool for gauging disease progression and treatment response.”