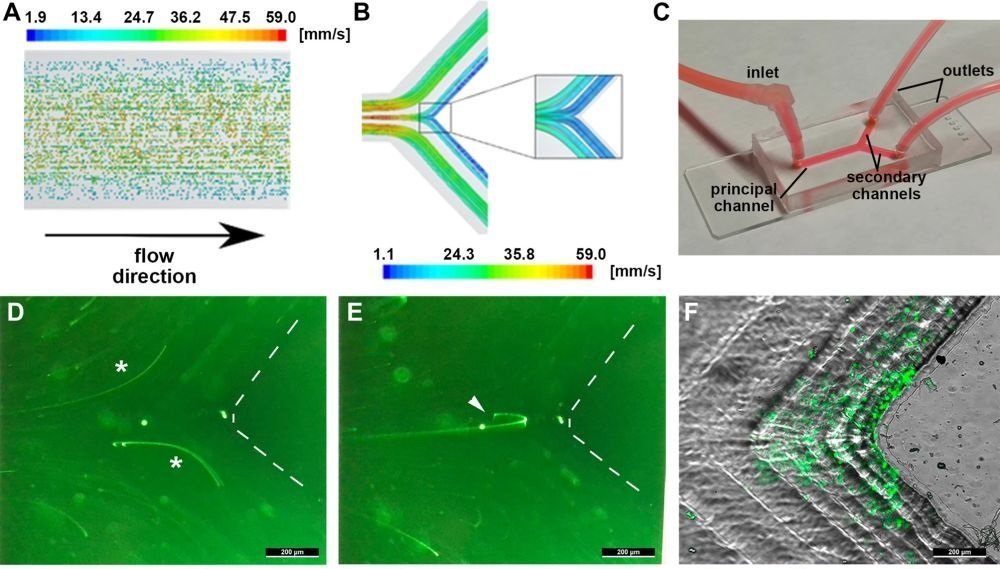 Posted at 23:03h in Latest Research by Pouriya Bayat

“Homing of circulating tumour cells (CTC) at distant sites represents a critical event in metastasis dissemination. In addition to physical entrapment, probably responsible of the majority of the homing events, the vascular system provides with geometrical factors that govern the flow biomechanics and impact on the fate of the CTC. Here we mathematically explored the distribution of velocities and the corresponding streamlines at the bifurcations of large blood vessel and characterized an area of low-velocity at the carina of bifurcation that favours the residence of CTC. In addition to this fluid physics effect, the adhesive capabilities of the CTC provide with a biological competitive advantage resulting in a marginal but systematic arrest as evidenced by dynamic in vitro recirculation in Y-microchannels and by perfusion in in vivo mice models. Our results also demonstrate that viscosity, as a main determinant of the Reynolds number that define flow biomechanics, may be modulated to limit or impair CTC accumulation at the bifurcation of blood vessels, in agreement with the apparent positive effect observed in the clinical setting by anticoagulants in advanced oncology disease.” 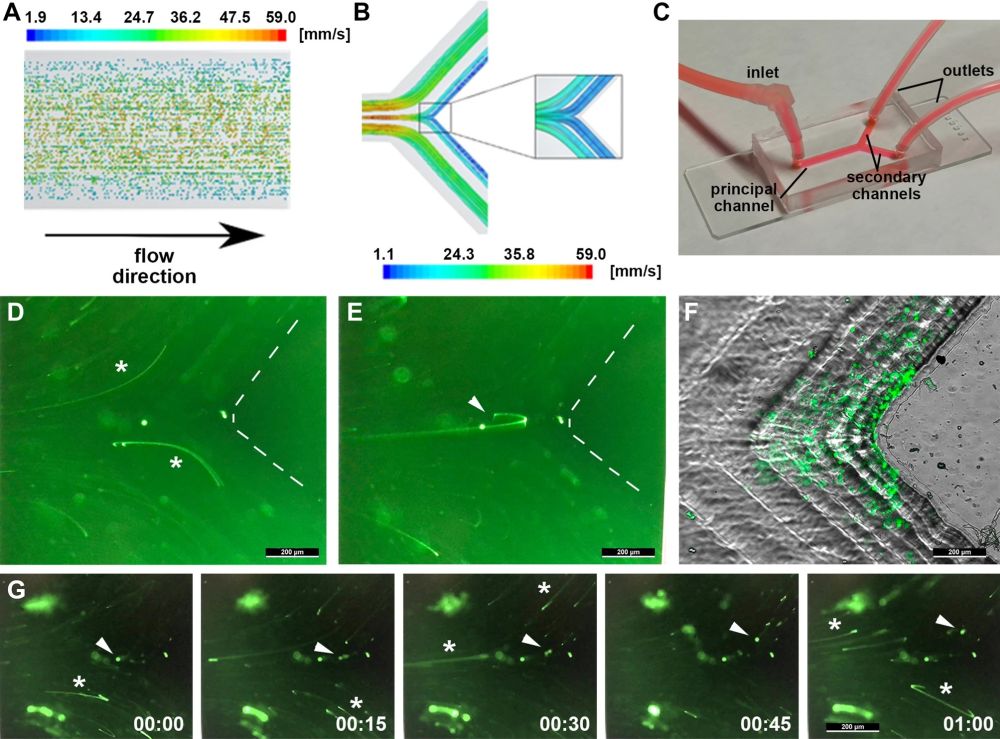 “(A) Schematic representation of the distribution of particles and color-coded velocities in the direction of the flow. Note that the particles with highest flow velocity are located in the centre of the channel while those distributed at the walls flow more slowly. (B) Graphical description of the flow-lines distribution at the bifurcation of a representative blood vessel based on the numerical simulations of the mathematical model. The streamlines are color-coded following the value of the velocity in mm/s. (C) Image of the microfluidic Y-chamber connected to the perfusion pump for the in vitro fluidic experiments mimicking a vessel bifurcation. (D, E) Representative fluorescence images of the trajectories of GFP-tagged CTCs in the microfluidic chambers following the high-velocity streamlines from the principal towards the secondary channel (asterisks in panel D), and the minoritarian component following the inertial trajectories towards the low-velocity area at the carina (arrowhead in panel E). The vertex of the bifurcation has been delineated by dashed lines. (F) Arrest of GFP-tagged CTC at the low-velocity area of the bifurcation resulting from the inertial trajectories upon CTC recirculation. (G) Representative sequence of a GFP-tagged CTC illustrating the residence time at the carina (arrowhead), in comparison with the trails resulting from the majoritarian CTC following the high-velocity streamlines (asterisks); the entire sequence lasts one second, as numerically indicated.” Reproduced under Creative Commons Attribution 4.0 International License from Otero-Cacho, A., Carnero, B. et al. Haemodynamic-dependent arrest of circulating tumour cells at large blood vessel bifurcations as new model for metastasis. Sci Rep 11, 23231 (2021)