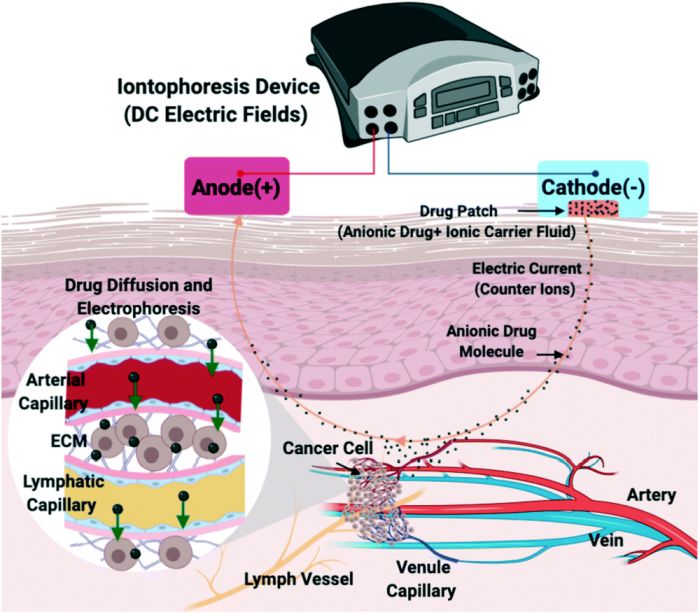 Posted at 16:49h in Latest Research by Pouriya Bayat

Iontophoresis is a transdermal drug delivery method that employs a low-intensity voltage on the skin to deliver a charged drug to the tissue often through electrophoresis or electroosmosis. This method has experienced a rise as a technique for delivering anti-cancer reagents to tumours. An accurate in vitro model can be of significance at this stage for optimal drug delivery.

The tumour microenvironment is often quite complex which renders it difficult to be modelled in vitro. Microfluidics, however, has shown great promises in the past for mimicking tumour environments. A recent study conducted at Virginia Polytechnic Institute and State University has taken advantage of microfluidics fabrication to develop a microfluidic device for modelling iontophoretic drug delivery.

“We present the first iontophoresis-on-chip (IOC) platform that mimics the outcome of iontophoretic drug delivery for the treatment of breast cancer. The IOC platform and corresponding mathematical model enabled the precise quantification of carboplatin drug delivery and its corresponding anti-cancer efficacy under various voltages and currents.”, the authors elaborated.

Design and working principle of the chip

The microfluidic chip consists of two layers. In the bottom layer, a microchamber is embedded for cell culture. The cell culture chamber is surrounded by two microchannels that recapitulate lymph capillaries and serve as drug sinks. The top layer houses a drug reservoir right on top of the cell culture microfluidic chamber. In order to perform the iontophoresis, a negative electrode connects to the top layer while a positive connects to the bottom. Human breast cancer cells were immersed in heparin hydrogel and manually injected into the cell culture chamber. The hydrogel also could mimic a salt bridge in the experiment.

The iontophoresis-on-chip device for modelling transport of charged drugs to tumours. Reproduced under a Creative Commons Attribution 3.0 Unported Licence.

The microfluidic chip was tested to investigate the effect of the drug charge and cell density on drug delivery and tumour cell destruction. It was shown that this microfluidic device was able to mimic the transport of charged drugs such as carboplatin to the tumour. Optimization experiments revealed that a 50-70 mV of DC electric field along with a 3 mA of current could result in maximum cell death (70-90%).

Anti-cancer drugs have different properties which in turn demands various methods for drug delivery. Microfluidic devices such as the presented iontophoresis-on-chip can be employed as predictive models to ensure optimal drug delivery in cancer patients.

“In the future, our device also has the capability to vary flow, ECM porosity, electric field intensity, tumour size, and tumour type. This model is the first step towards generating a predictive model for in vivo applications. Further improvements to the model for transdermal iontophoretic drug delivery can be made and validated by adding additional components in the microfluidic device, mimicking the human epidermis.”, the authors concluded. ”