Posted at 08:57h in Latest Research by admin

Tissue slices are precision-cut organ slices that are commonly used for metabolism and toxicity research due to their advantages such as maintaining cell-type diversity and preserving the organ cytostructure as well as the metabolic enzymes.

A major issue is that the tissues are mostly single-use in traditional assays. So, for every test a new slice is needed which is not ideal for high-throughput assays. Sometimes, the tissue slice can be scarce rendering multiplex ex vivo assays quite costly. Additionally, tissue slices, especially convective tissues, come with a lot of surface irregularities. These features often get damaged during the slicing or are removed for simple analysis. A versatile platform that allows multiplex testing in which tissue slices with various topographies and thicknesses can significantly impact this research field. Microfluidics has opened a window of opportunity to address these challenges. 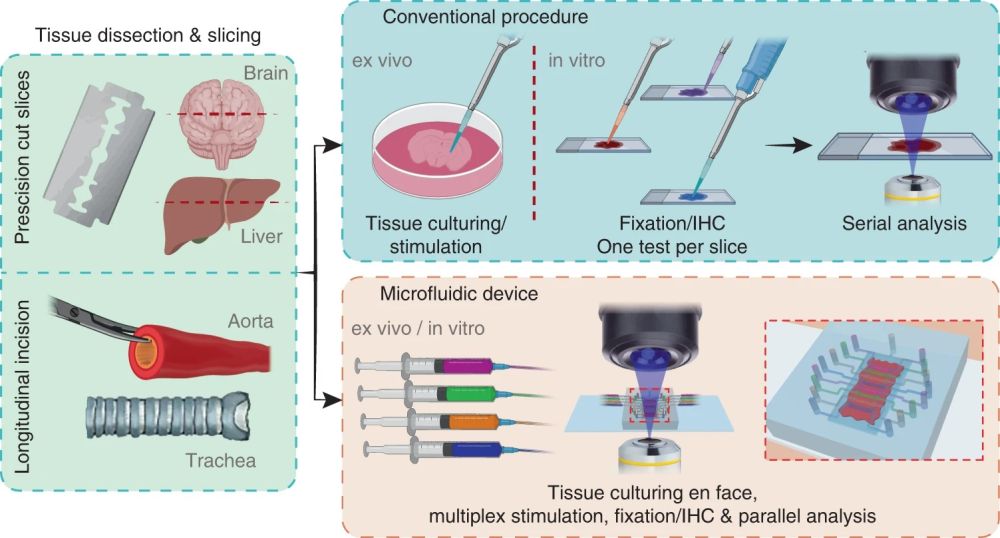 A research group from the Center for Research and Advanced Studies of the National Polytechnic Institute, Mexico, led by Jose Garcia-Cordero, recently took advantage of microfluidic fabrication techniques and developed a microfluidic chip that overcomes the aforementioned issue. The reported microfluidic device enables eight independent assays to be performed on precision-cut tissue slices and can accommodate various tissue topographies as well as tissue thicknesses. 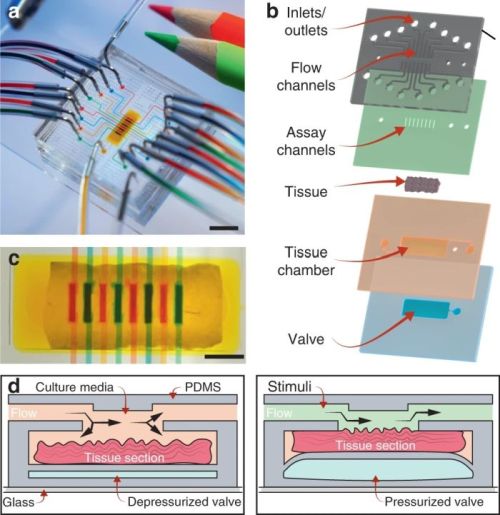 One challenge the group faced was the optimization of the valve. When the valve gets pressurized, it can form a parabolic shape. Therefore, it does not push al the spots of the tissue evenly which in turn can cause an error in the measurements by overexposure to some assay microchannels and underexposure to the others. Thus, the research group first optimized the valve to ensure the tissue touches all the assay microchannels equally.

Another optimization required was the cross-contamination of the assay microchannels. “we investigated whether there was any crosstalk between the microfluidic channels or biomolecule diffusion through the tissue from one channel into neighboring channels”, the authors explained. These tests were carried out by running fluorescent dyes through the microchannels and measuring the density gradients over the width of the assay microchannels and the gaps in between. In cases where the reagents leak, decreasing the width of the assay channels or increasing the gaps would resolve the issue.

The reported device was tested with two irregular tissues: murine aorta and trachea. As a proof of concept delivery of cyanic with different concentrations was examined which was promising and did not show cross-contamination. Currently, the device cannot be used for long-term (>1 day) culture of the tissue. However, the authors believe this can be improved by providing nutrients to the bottom side of the tissue as well as designing side assay channels to nourish the apical side.

“Our microfluidic platform can be employed in other disciplines, such as tissue physiology and pathophysiology, morphogenesis, drug toxicity and efficiency, metabolism studies, and diagnostics, enabling the conduction of several assays with a single biopsy sample.”, the authors concluded.