Posted at 10:28h in Latest Research by Pouriya Bayat

Bacteria is capable of sensing several environmental signals and propelling toward desirable niches for colonization. In this week’s research highlight, we will introduce a simple microfluidic device that can be used to study the collective migration of E. coli published in Microsystems and Nanoengineering Journal.

“In this work, we studied different parameters of Escherichia coli (E. coli) collective migration, in particular the quantity of bacteria introduced initially in a microfluidic chip (inoculum size) and their exposure to antibiotics (ampicillin, ciprofloxacin, and gentamicin). We developed a hybrid polymer-glass chip with an intermediate optical adhesive layer featuring the microfluidic channel, enabling high-content imaging of the migration dynamics in a single bacterial layer, i.e., bacteria are confined in a quasi-2D space that is fully observable with a high-magnification microscope objective. “, the authors explained.

The proposed microfluidic device for analysis of the phenotypic diversity in bacterial flagella-induced motility consisted of an inlet and an outlet port connected with a microchannel with a width of 800 μm and length of 3 mm. The microfluidic chip was microfabricated in two steps. First, a PDMS stamp with the shape of the chip was fabricated using deep reactive ion etching (DRIE) on a silicon wafer followed by soft lithography. Next, PMMA slides were prepared by laser cutting and access holes were machined. An optical adhesive (OA) was poured over the PMMA followed by pressing the PDMS stamp into the liquid OA. The OA was then partially cured by UV and the PDMS stamp was removed. Finally, the top layer was sealed with a glass coverslip. The microfluidic device consisted of 30 independent microchannels allowing simultaneous assays under various conditions. 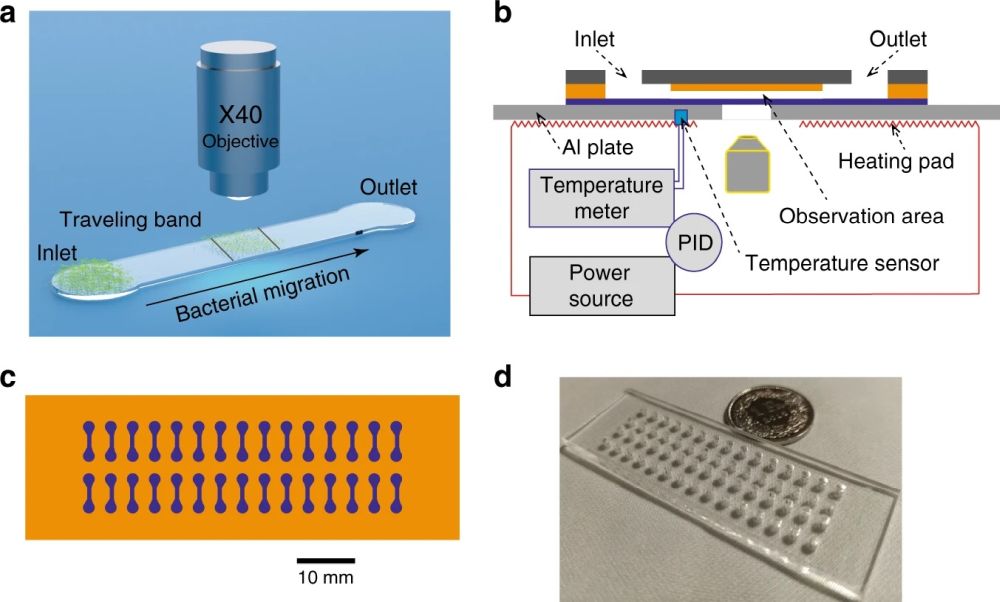 In order to run the experiments, 2 μL of the bacterial suspension was pipetted into the inlet port. The capillary force then filled the microchannel. The microfluidic chip was then placed on a heating pad for on-chip incubation of the bacteria. Different channel heights were tested to find the optimal range for fluid flow. Small channel heights could lead to clogging the microfluidic device while large channel heights caused challenges in focusing the bacteria. Channel height of 4 μm was found to be optimal for the current experiment. The microfluidic chips were placed under an inverted microscope to image the traveling band through the device. Time was given to the flow to stabilize itself and the imaging protocols were started to capture the bacterial migration due to chemotaxis by monitoring the traveling band.

Read the original article: Effect of inoculum size and antibiotics on bacterial traveling bands in a thin microchannel defined by optical adhesive