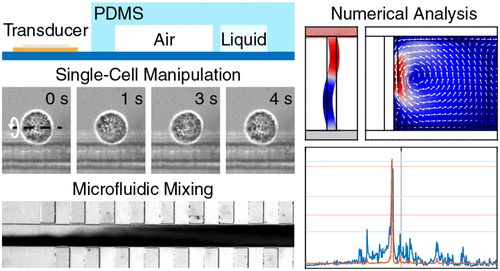 Posted at 19:47h in Latest Research by Pouriya Bayat

“In this work, we introduce the embedded microbubble, a novel PDMS-based microstructure combining the low-power advantage of bubble-based acoustic streaming with the temporal stability of acoustically excited solid features. The design of the embedded microbubble consists of a rectangular air chamber which is separated from the fluid channel by a thin PDMS wall. With help of microfluidics we perform in-depth numerical investigations and quantify the influence of geometrical parameters, such as the PDMS wall thickness or the microbubble’s length, on the acoustic streaming inside the fluid channel and utilize these findings to optimize our device design.”, the authors explained. 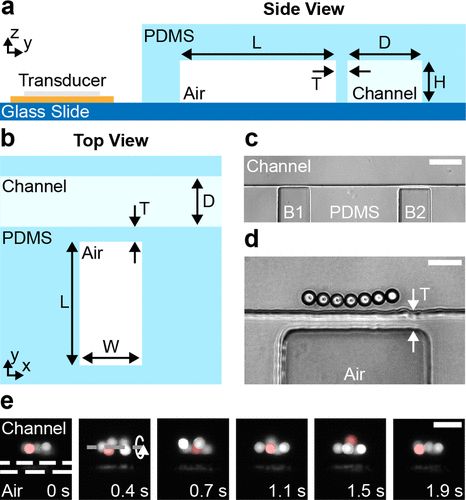 PDMS was used for the microfabrication of the microfluidic chips. The chip consisted of a main microchannel through which the samples were introduced surrounded by several microchambers. The microchambers were sealed to trap air (microbubbles). The microbubbles were separated from the main channel with thin PDMS walls (see below). A piezoelectric device was placed near the device to excite the device. The piezoelectric parameters could be controlled to cause the microbubble and the thin PDMS wall to resonate in its eigenmodes. The resonance of the thin wall leads to the attraction and rotation of small molecules in the vicinity.

A series of numerical simulations were conducted to find the optimal condition and wall thickness of the microfluidic device. The chip was then tested with commercially available polystyrene (PS) beads (~10 µm). The PS beads were trapped near the walls and slowly rotated. The beads were only trapped in the vicinity of the microbubble walls and not the rest of the walls highlighting the effect of the resonating walls on the trapping and rotation of the beads. The microfluidic chip was then tested with HeLa cells and was shown to be capable of trapping and rotating single cells near the walls.

In addition to the biological applications, with help of microfluidics, the research team showed the application of this mechanism for mixing. Two liquids with different colors were run through the microfluidic chip. When the piezoelectric was off, the liquids formed two separate streamlines flowing alongside each other with limited mixing. However, when piezoelectric was on, the resonance caused the liquid to mix.

“Future work may include mixing-based gradient generation important for various chemical applications, the improvement of microfluidic mixing performance through the combination of embedded microbubbles and sharp-edge structures, and the extension of our approach for manipulating multicellular organisms, such as Caenorhabditis elegans”, the authors concluded.