Posted at 13:10h in Latest Research by Pouriya Bayat

As reported by leukemia and lymphoma society of Canada, from 2003 to 2012, there has been a 1.4% a year reduction in the mortality rate of leukemia due to the progress in research and treatment methods.  Long-term monitoring of leukemia is arduous since it requires procedures such as bone marrow (BM) biopsy which is painful, invasive, costly, and complex. Liquid biopsy has not been much of an option due low count of leukemia blast cells in the bloodstream. However, recent advances in microfluidics have enabled researchers to simultaneously enrich and detect these rare blast cells from patient samples.

A team of researchers has recently reported a microfluidic chip called blast biochip (BCB) in npj Precision Oncology journal published by Nature family for high sensitivity detection of the blast cells. “The motivation to work with liquid biopsies instead of BM aspirates is to allow convenient detection of blast cells without incurring BM aspiration”, the authors said.

The workflow in their study started with lysis of whole blood to remove red blood cells followed by resuspension of the cells in a new buffer. The buffer was then introduced to the microfluidic device (blast biochip) for continuous processing and concentrating on the target blast cells. The BCB chip employed the principles of inertial microfluidics to separate the blast cells from healthy cells. Each biochip consisted of one inlet, a spiral microchannel, and three outlets. The healthy cells and blast cells that were introduced to the chip experienced different amounts of forces. The blast cells were stiffer than the normal cells due to the higher nuclear/cytoplasmic (N/C) ratio which caused the differential force. This difference resulted in the healthy cells and blast cells to focus on different streamlines along the spiral microchannel. They placed a bifurcation point at the outlet to separate these streams and collect them in different outlets accordingly. Their approach for exploiting the inertial microfluidics concept removed the need for exploiting antibodies for targeting any specific protein that in turn significantly reduced the cost of the assay. 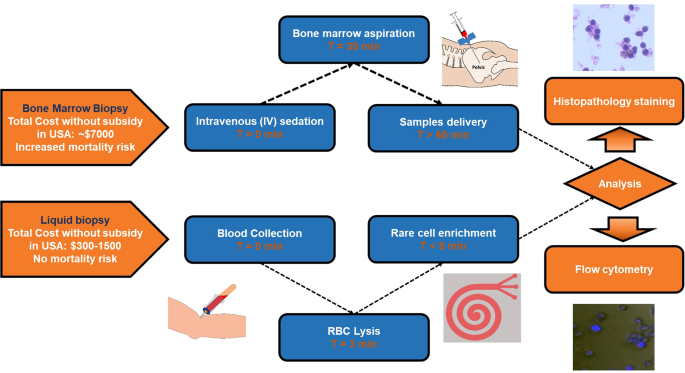 Reproduced from the original article under common creative licence.

The preliminary tests showed a high detection sensitivity of 1 target cell among 10-6 non-targets. This high sensitivity is promising for cases where cancer has progressed to chronic stages.