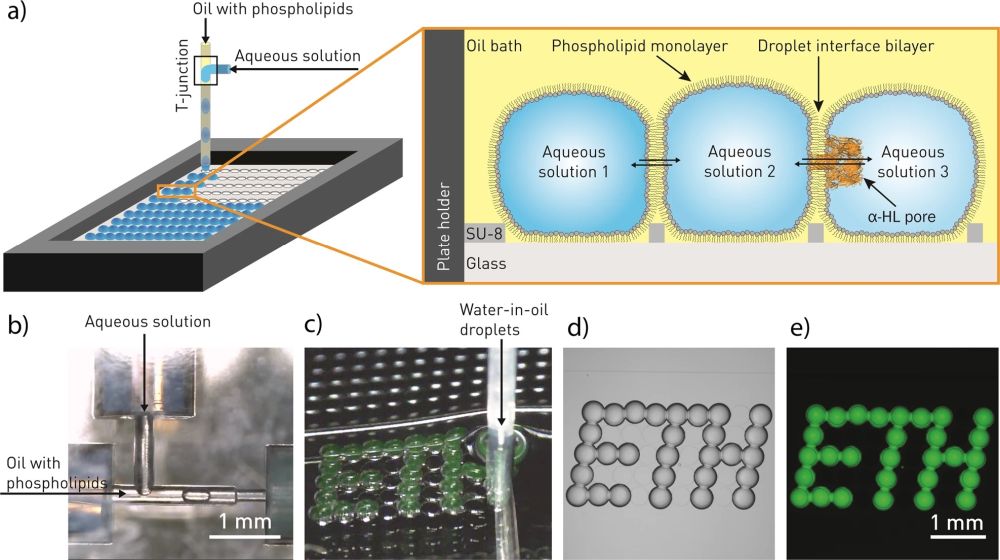 Posted at 17:51h in Latest Research by Pouriya Bayat

Rarely a week goes by without a novel microfluidic technique being developed for synthetic biology applications and artificial cell generation. In this regard, oftentimes, droplet microfluidics is employed due to its capabilities for generating uniform lipid layers and encapsulating the cellular machinery. These liposomes, similar to the organelles in the cells, can be used as chemical reactors for performing biological reactions. There are many aspects involved in generating an artificial cell such as cellular metabolism, reproduction, and cell-cell interaction.

“In this context, we employ here a versatile microfluidic platform that enables precise positioning of nanoliter droplets with user-specified lipid compositions and in a defined pattern. Adjacent droplets make contact and form a droplet interface bilayer to simulate cellular membranes.”, the authors explained.

The microfluidic platform consists of a T-channel microfluidic chip capable of generating 25 nL water in oil droplets. The travel time through the tube gives the lipids enough time to self-assemble and create a lipid monolayer at the water-oil interface. The microfluidic chip was mounted on a motorized xy stage. The droplets then get dispensed on an open surface over a glass slide. The glass slide was coated with SU8 and included cavities on the surface. The droplets were dispensed in close proximity and created a so-called droplet interface bilayer. In this case, a lipid bilayer was formed. Microscopy of the droplets revealed that the lipid bilayer was formed in ~1 min at 37oC. The glass slide could take any 2D predefined shape and the droplets could be spotted in any 2D pattern such as arrays, rows, pairs, etc.

The droplet interface bilayer (DIB) allows the droplets to communicate with each other. They inserted the membrane pore α-HL to enable adjacent droplets to transfer small water-soluble molecules. This could be easily traced in real-time by fluorescent microscopy or end-point measurements. The α-HL could also be selectively added to determine a certain pathway through the droplets for the small molecules.

“We believe this opens the door for experiments with DIBs, where fluorescence labeling is not possible or not preferred. In the future, the platform can be employed for other membrane studies, e.g., it facilitates transporter or permeation studies as required for drug discovery and drug testing with asymmetric membranes. Our platform could mimic a simple cell/organelle model such as a mitochondria membrane in a cell, or artificial cell clusters or tissue.”, the authors concluded.