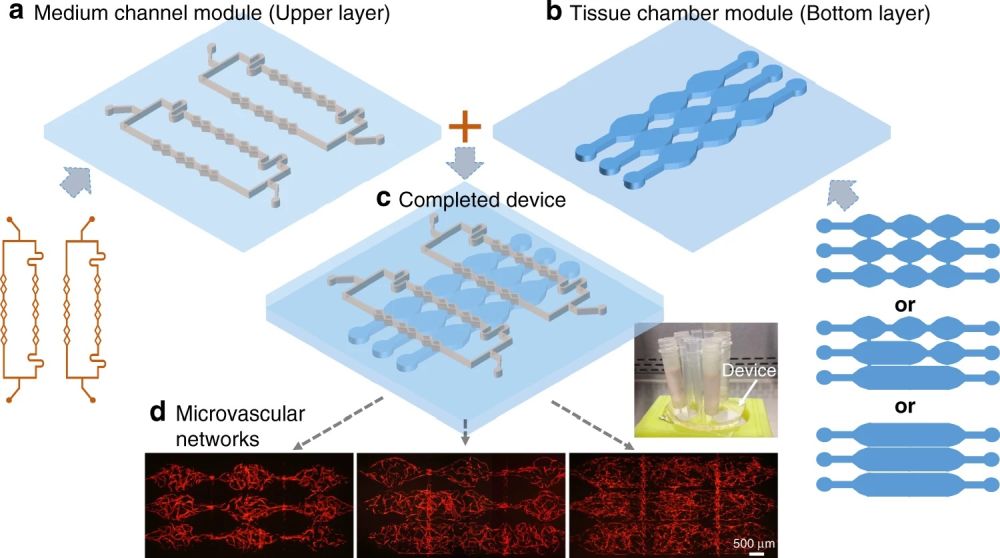 Posted at 18:50h in Latest Research by Pouriya Bayat

Multi-layer microfluidic chips are used for a wide variety of applications involving microfluidics. They are commonly used in organ-on-a-chip platforms where one layer encapsulates the cell culture and receives nutrients or drug formulations from the top microchannels through a porous membrane. The design and fabrication of microfluidic multi-layer chips, however, could be challenging. For instance, alignment between the layers should be done very carefully. Bonding and leakage issues are also common in multilayer microfluidic devices. These multi-layer chips often have a porous membrane in between to allow communication between the top and bottom layer which can be problematic to bond and cause leakage in the long run.

A recent publication in Nature Microsystems and Nanoengineering has aimed at simplifying the microfabrication of multilayer chips in order to generate large-scale perfusable microvascular networks. They modified their design in a way that the layers could talk without any need for a porous membrane.

“Here, we propose a modular approach with a multilayered configuration that separates the tissue chambers and culture medium channels into different device layers, where both layers can be fabricated and modified individually. This allows the tissue chambers to be densely packed, while the supplied culture medium can flow vertically into multiple tissues. More importantly, the two device layers can be combined freely, forming various flow conditions inside an array of tissue chambers.”, the authors elaborated.

The group took advantage of rapid microfluidic manufacturing techniques to microfabricate 43 flow-focusing droplet generators and evaluate their performances over a wide range of flow conditions. There are 6 main geometrical parameters that can vary in a microfluidic flow-focusing droplet generator namely, orifice width, orifice length, water inlet width, oil inlet width, and device thickness. All these parameters were varied to account for the geometrical changes as well as flow conditions and fluid properties. This is necessary to prepare a fairly large data-set required for the machine learning algorithm. Additionally, the team designed a tool for designing a droplet generator based on the user’s specifications.

Here, both layers are made from PDMS. The bottom layer consists of multiple microchambers residing next to each other with similar or different shapes. These microchambers will be filled with cell-laden hydrogels and will serve as the cell culture chamber. The top layer consists of a network of microchannels that vascularize the cell culture microchamber. The top and bottom layers meet at certain pores so that the top vasculature perfuses the cells in the bottom layer. In single-layer cell culture chambers where hydrogel is used to carry the cells, often a microarray with a trapezoid shape is used to prevent the hydrogel from bursting into the medium microchannels (See image below). 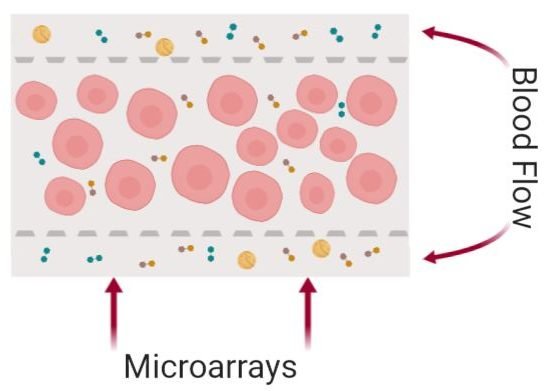 This idea is very difficult to implement using standard lithography techniques. Therefore, the group modified the same idea to make it applicable for a multilayer chip. They employed a plastic mold with slightly different properties than SU8. The plastic showed a nonisotropic shrinkage behavior and thus created a trapezoid shape. This resulted in a communication point with different widths on the top and bottom channels (see the cross-section).

Leakage can be an obstacle specially over the long run. It can occur both laterally (between the cell culture chambers) and vertically. The leakage was tested by running FITC-dextran (70 kDa, a molecular weight close to human serum albumin) through the vasculature. The microfluidic device was then monitored continuously under a fluorescent microscope and to trace the perfusate. It was shown that the FITC-dextran molecules had passed through the vessels near the communication pores and no FITC-dextran was observed outside of the vessels during the test. 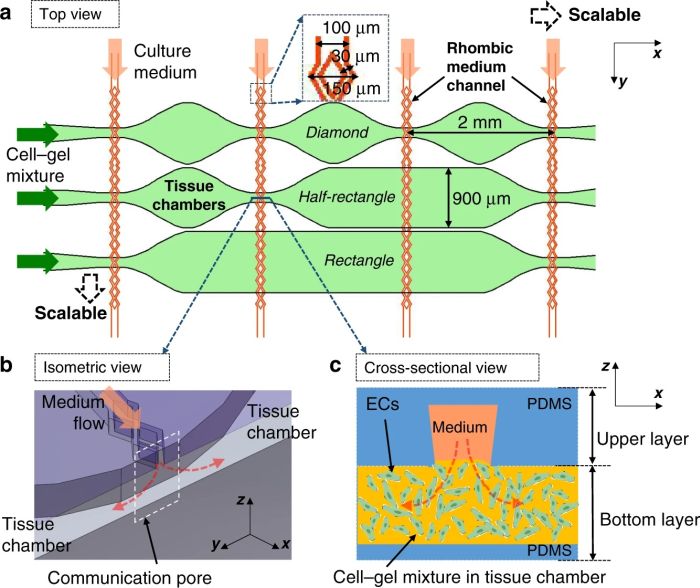 The bottom layer was then filled with human endothelial colony-forming cell-derived endothelial cells (ECFC-ECs) mixed with hydrogel. Two columns were connected to the inlet and outlets of the top microchannel to drive the perfusate due to the hydrostatic pressure. It was shown that the microvascular network was fully formed in ~10-12 days and the culture could be maintained for approximately another 14 days.

“This modular microfluidic system provides flexibility and scalability for the development of perfused microvascular networks in vitro, which has high potential for body-on-a-chip applications by connecting multiple organ types in the same platform.”, the authors concluded.

Read the original article: A modular microfluidic system based on a multilayered configuration to generate large-scale perfusable microvascular networks