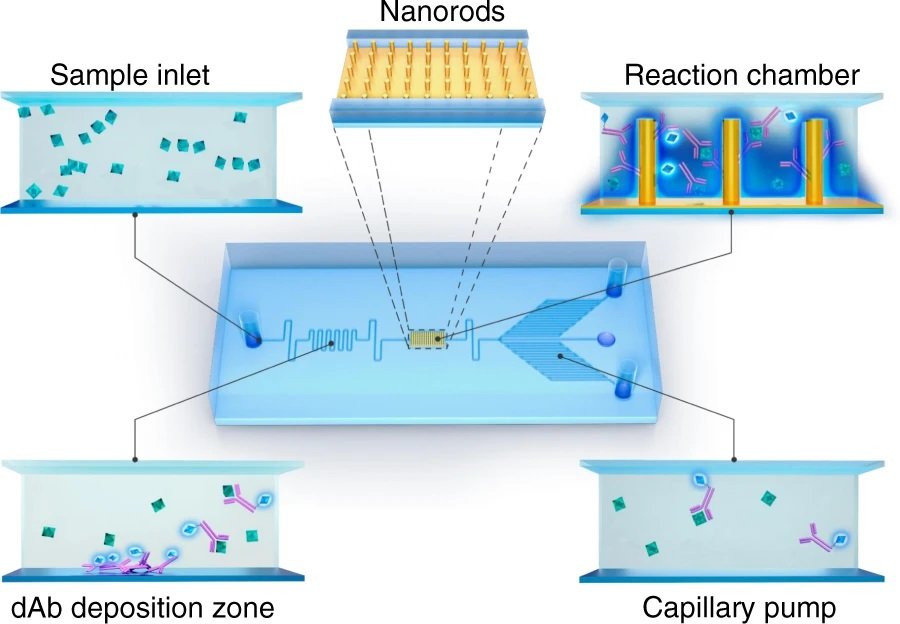 Posted at 19:13h in Latest Research by Pouriya Bayat

Immunoassays are extensively used for quantifying biomarkers in clinical laboratories. This week’s research highlight focuses on a capillary-driven microfluidic device for rapid and sensitive one-step immunoassay published in Microsystems and Nanoengineering Journal in which gold nanorods were employed in the reaction chambers to enhance the signal 4000 times.

“Here, we present integrated nanorod arrays on microfluidic chips for fast and sensitive flow-through immunoassays of physiologically relevant macromolecules. Dense arrays of Au nanorods are easily fabricated through one-step oblique angle deposition, which eliminates the requirement of advanced lithography methods. We report the utility of this plasmonic structure to improve the detection limit of the cardiac troponin I (cTnI) assay by over 6 × 10^5-fold, reaching down to 33.9 fg/mL (~1.4 fM), compared with an identical assay on glass substrates. Through monolithic integration with microfluidic elements, the device enables a flow-through assay for quantitative detection of cTnI in the serum with a detection sensitivity of 6.9 pg/mL (~0.3 pM) in <6 min, which was 4000 times lower than conventional glass devices. This ultrasensitive detection arises from the large surface area for antibody conjugation and metal-enhanced fluorescent signals through plasmonic nanostructures. Moreover, due to the parallel arrangement of flow paths, simultaneous detection of multiple cancer biomarkers, including prostate-specific antigen and carcinoembryonic antigen, has been fulfilled with increased signal-to-background ratios. Given the high performance of this assay, together with its simple fabrication process that is compatible with standard mass manufacturing techniques, we expect that the prepared integrated nanorod device can bring on-site point-of-care diagnosis closer to reality.”

The microfluidic channels are microfabricated using conventional photolithography and soft lithography methods using PDMS. The microchannels are aligned and bonded on a glass slide with pre-deposited detection antibodies (dAB) and capture antibodies (cAB) conjugated with nanorods. The microfluidic chip consists of an inlet in which the samples are pipetted and drawn to the microchannels using capillary-driven flow. The research team takes advantage of the capillary flow to omit the need for an external pump for delivering the reagents which in turn increases the portability and reduces the cost of the final microfluidic device making it suitable for point-of-care applications. The reagents travel through the serpentine microchannels in which they meet the predeposited detection antibody. Subsequently, the dAB-antigen conjugates pass through a reaction chamber in which they get captured by capture antibodies. The unreacted residues then get washed away through the microfluidic device with the help of a capillary pump. The capillary pump consists of an array of small parallel microchannels that enhance the capillary force and determine the flow rate through the microfluidic chip. The microfluidic device was mounted on a fluorescent microscope to monitor the fluorescence signal emitted from the reaction zone.

The microfluidic chip proposed for rapid and sensitive one-step immunoassay was then tested with human serum spiked with various concentrations of a target antigen. In this case, a cardiac troponin I (cTnI) assay was performed by pipetting 20 µL of human serum through the inlet. The capillary pump resulted in a flow rate of 0.6 nL/s and filled the microchannels in nearly 6 minutes. The fluorescent measurements were correlated to the concentration of the antigens. It was shown that the deposited nanorods enhanced the limited of detection nearly 4000 folds. The microfluidic was also modified for multiplexing by the addition of parallel flow paths and immobilizing different antibodies. The sample containing various target proteins was guided through parallel microchannels in the microfluidic chip where functionalized nanorods were deposited in separate reaction chambers.

“For real assays involving different fluorescent labels, further optimization of nanorod structure parameters is required, as well as shadow masks to fabricate various nanorods on selected regions of the substrates. Nevertheless, with its easy fabrication process and high assay performance, our microfluidic immunoassay devices integrated with dense arrays of nanorods have a high potential for application in on-site high-throughput screening for many diseases.”