Posted at 08:43h in Latest Research by Pouriya Bayat

“Particle/cell washing is an essential technique in biological and clinical manipulations. Herein, we propose a novel circular contraction–expansion array (CCEA) microdevice. It can be directly connected to a needle tip without connection tubes. Its small size and centrosymmetric structure are beneficial to low sample consumption, high connection stability, and a wide application range. “, the authors explained.

The research team aimed at developing a device with potential for medical use. Therefore, the circular contraction–expansion array (CCEA) microfluidic device was designed such the needle could directly be connected to the device without the need for setting up the tubing. The microfluidic device consisted of a circular centrosymmetric microchannel with a radius of 3 mm connected to two inlets and two outlets on either end. The chip was microfabricated using PDMS using conventional soft and photolithography methods. The sample was introduced through inlet 1 while sheath flow was injected from inlet 2. Outlet 1 and outlet 2 were used for collecting the target cells and waste fluid, respectively. 50 repeated contraction–expansion elements with a radius of 100 µm were placed around the circular channel (100 µm by 40 µm) which enhanced the Dean flow helping the cell washing. 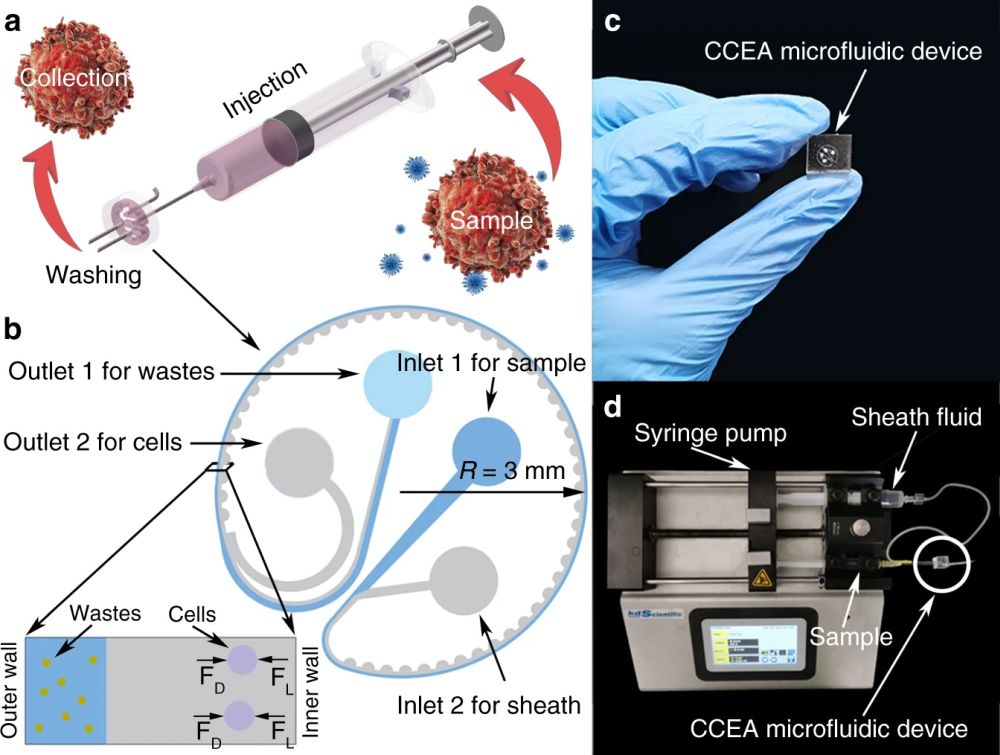 After validation using simulation models, the microfluidic chip was tested with microparticles followed by testing three different cancer cell lines. The device was run at optimal flow conditions for stable fluid distribution and was shown to be capable of handling small sample volumes due to the lower dead volumes achieved by removing the tubing and directly connecting the needle to the chip. A cocktail of H1299, MCF-6, or U-2932 cells mixed with smaller contaminants was run through the device and it was shown that the microfluidic device was capable of isolating the cells.

“We demonstrated a CCEA microchannel that realizes continuous, rapid, and sample-saving cell washing on a needle tip. Compared with the circle channel and CEA channel, our CCEA microchannel can produce a much stronger Dean flow. Under the enhanced Dean drag force, target particles rapidly migrated from the initial outer wall (pinched by sheath fluid) to the inner wall side. The same particles were dominated by the inertial lift force and focused at the centerline in the circle channel and CEA channel. “, the authors explained.