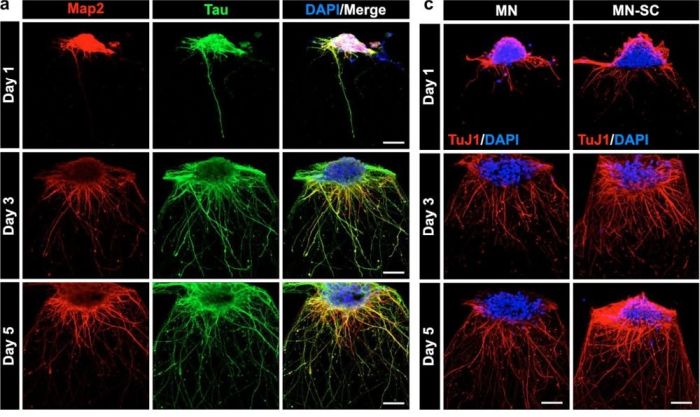 Posted at 19:13h in Latest Research by Pouriya Bayat

Organ-on-a-chip systems are well established as 3D cell culture microfluidic models capable of recapitulating the in vitro microenvironment of the cells. Organ-on-a-chips can differ in various aspects such as having a monoculture/coculture, mechanical components, electrical elements for actuation or real-time readouts, etc. The combination of these elements as well as the wide variety of materials used for the fabrication of microfluidic devices such as PDMS, PMMA, PC, etc. enables researchers to modify their organ-on-a-chip according to the specifics of each experiment and create unprecedented microfluidic microenvironments for the cell culture.

A recent development in organ-on-a-chips includes a microfluidic device that 3D in vitro model of the peripheral nervous system which is published in NPG Asia Material Journal. There is a long way that a signal has to travel from the brain to the muscles for motor output. Different types of cells such as Schwann cells, motor neurons, muscle cells, etc. are involved in this path and have to interact with each other to ensure the signal is properly transmitted. Miscommunication between these cells could result in motor neuron diseases. The proposed organ-on-a-chip aims at providing a physiologically relevant context for co-culturing motor neurons and Schwann cells.

“Here, we present an in vitro model of the peripheral nervous system (PNS) by establishing a coculture model of motor neurons (MNs) and Schwann cells (SCs) in a 3D environment in a microengineered extracellular matrix hydrogel scaffold.”

The microfluidic chip used in this study benefited from a popular design of organ-on-a-chips as shown above. The microfluidic platform consists of a main microchannel in the middle through which the Schwan cells suspended in hydrogel are first introduced to the chip. The PDMS posts surrounding this main channel (height: 200 µm) helps in containing the hydrogel in the main channel and preventing leakage to the side channels. The two side channels serve as a medium channel to expose the cells to nutrients and any potential drug of choice for screening. These side channels have an extra role here that is carrying the motor neurons to attach to the surface of the ECM and connect with the Schwann cells.

“An important aim of this study was to demonstrate an in vitro platform for MN–SC coculture to represent a model of the PNS and to assess the myelination process in a 3D environment. We proposed a robust method for modeling PNS myelination using a MN–SC coculture in a microengineered platform. This platform can be easily used to facilitate the coculture of different types of cells for bioengineering applications. Additionally, it can be used as a tool to assess axon–SC interactions during myelination and evaluate myelin formation in a more physiologically relevant environment than traditional 2D cell culture settings.”, the authors concluded.

Read the original article: A three-dimensional in vitro model of the peripheral nervous system