Posted at 17:57h in Latest Research by Pouriya Bayat

Respiratory morbidity is a significant issue with prematurely born neonates. The premature neonates are often in need of some sort of support since their lungs are not yet fully mature. Although the current treatments such as mechanical ventilation considerably decrease the mortality rate, they can lead to iatrogenic injuries. A research group from McMaster University led by Dr. Selvaganapthy in collaboration with University Hospital Nuremberg has developed a pumpless microfluidic device to overcome these complications and provide respiratory support for preterm infants.

“In this paper, the first successful operation of a microfluidic, artificial placenta type neonatal lung assist device (LAD) on a newborn piglet model, which is the closest representation of preterm human infants, is demonstrated.”, the authors explained.

Design and working principle of the microfluidic device 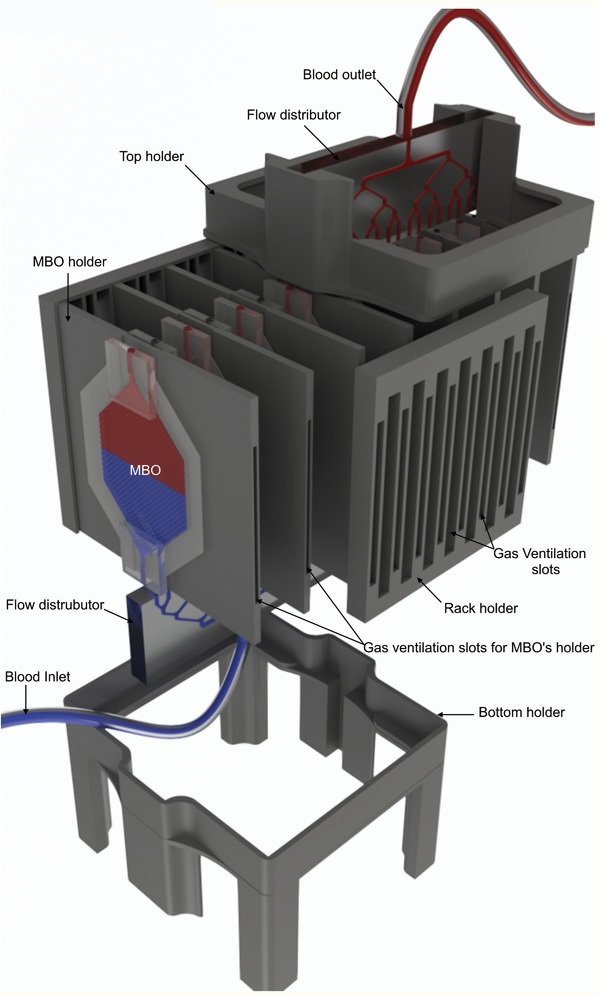 The lung assist device (LAD) consists of 8 pairs of microfluidic chips called microfluidic blood oxygenators (MBO) connected to flow distributors. First, the blood enters the flow distributor which divides the flow into 16 streams with equal flow rates. Each stream flows into an MBO where the incoming deoxygenated blood gets oxygenated and exits the device. These 16 streams are then merged and flown to an air bubble trap and eventually back to the artery.

“The arteriovenous connection used in our approach directs partially oxygenated blood from the lungs into the LAD. The LAD assists by further increasing the oxygen saturation to 100% before returning it back to the body. Calculations show that the LAD is capable of supporting a 1.5 kg neonate by increasing the oxygen saturation of 50 mL min−1 of its blood from ≈75% to 100% in room air, thereby providing 30% of the total oxygen requirement and preventing respiratory distress.”

The microfluidic blood oxygenator (MBO) includes a PDMS microfluidic chamber with a height of 180 μm (or 130 μm) composed of an array of 1 mm2 micropillars and a total surface area of ~30 cm2. The microfluidic chamber was designed such that the input blood flow gets distributed all over this wide surface area to facilitate a more efficient and faster exchange of oxygen. The microchamber is sandwiched between two porous membranes to enable gas exchange with the surrounding.

PDMS is known to be hydrophobic and therefore is prone to protein absorption. Therefore, the PDMS surface is often modified to prevent protein attachment to the surface. In this case, the microchannels were coated with heparin to avoid protein absorption, blood coagulation, platelet adhesion, and thrombosis.

Upon successful preliminary tests of the microfluidic lung assist device with bovine blood, it was taken to the next level. The proposed microfluidic platform was tested with a piglet. A piglet was chosen as the animal model because it better represents a human preterm and term neonate in terms of body weight, blood volume, and physiological characteristics compared to other animals.

“Results from the piglet experiments revealed the effectiveness of this LAD in gas exchange without complications and agreed with in vitro results. Further steps in the development of the LAD include the installation of hemocompatibility, biocompatibility, and developing via the umbilical vessels.”, the authors concluded.