Posted at 17:54h in Latest Research by Pouriya Bayat

Soil microorganisms are of significant importance or nutrition cycling and regulation of carbon storage. The soil structure is composed of partly interconnected pores that these microorganisms live in and constantly reshape. The function and the effect of the microbes on the soil can be very complex is not quite known for us at the microscale. Microfluidics provides a means for controlling the microenvironment and can potentially be used for investigating the microorganism interactions in complex structures such as the soil. As reported in Communications Biology journal, in a recent attempt, a research group from Lund University in Sweden developed a microfluidic device for addressing the complexities of the spatiotemporal organization of the soil microorganisms.

“Here we incubate microfabricated, transparent ‘soil chips’ with soil, or bury them directly in the field. Both soil microbes and minerals enter the chips, which enables us to investigate diverse community interdependences, such as interkingdom and food-web interactions, and feedbacks between microbes and the pore space microstructures.”, the authors explained. 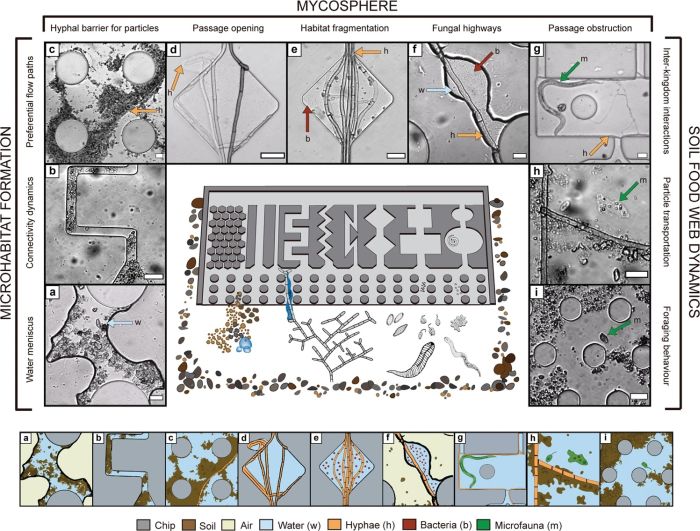 PDMS was chosen as the chip material and microfabricated using photolithography and standard soft lithography techniques. The microfluidic chips had a height of 7 microns and included several different designs which were used to investigate the effect of pore size and geometry on microbial dispersal of three functional microbial groups (fungi, bacteria, protists). Three different experiments were conducted that varied in the way that microbes were introduced to the microfluidic chips. In experiment 1, the microfluidic devices were buried under the soli for nearly two months and were given time to house the microbes. The chips were treated with three different regimes. In the first regime, the chips were prefilled with DI water while in the second and third conditions they were prefilled with a nutrient-rich media and left empty, respectively. After two months, the microfluidic soil chips were retrieved and taken to the lab for imaging. In experiments 2 and 3, the soil was collected from a lawn and placed at the chip entrance with different moisturizing conditions. For two months the soil chips were incubated and monitored under the microscope to screen the abundance and furthest extent of microbes into the chips. 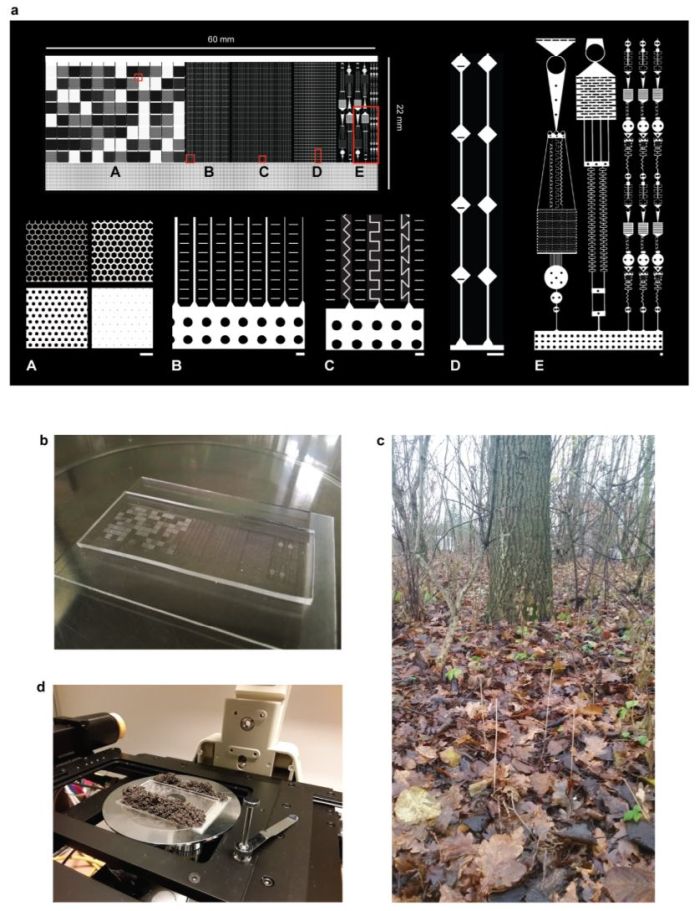 It was seen that in both conditions (in-situ incubation in the natural soil ecosystem and the laboratory condition), the microfluidic soil chips were able to house the soil microbial groups. The authors envisioned that the soil chips could be combined with more advanced data acquisition systems to extract more in-depth details on the chemical and genetic differences in various types of soils.

“Our soil chips create new possibilities for visual and time-resolved monitoring of food-web structures and may in the future identify food-web members via single-cell genomics on extracted material, increasing our understanding of protists’ involvement in soil nutrient cycles.”