Posted at 16:26h in Latest Research by admin

A group of researchers has now taken organ on a chips to a new level by developing a multiorgan system with circulating immune cells to mimic the immunosurveillance process. The results of this study that hinged upon a three organ microfluidic chip are reported in a recent article published in the Advanced Science journal. 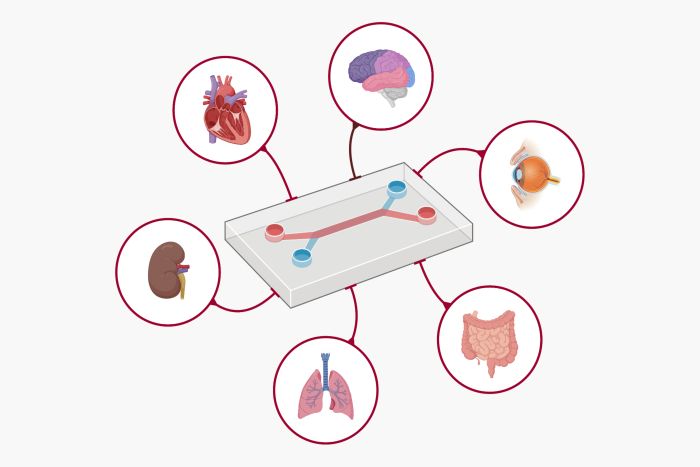 Organ on a chips are tiny devices, usually smaller than the palm of a hand, that employ microfluidics to create microchannels and chambers at the micron-scale size for cell culturing in a microenvironment similar to that of the cell’s natural habitat. The chips are sealed and sterile and made of an optically transparent material that allows visual and real-time monitoring and analysis of the cells.

In principle, an organ on a chip consists of a main microchamber. The chamber is microfabricated using a biocompatible material such as PDMS. The microchamber is often connected to multiple side microchannel. These side channels are often connected to a fluidic delivery system and serve multiple purposes. They can be used to deliver nutrients, bacteria, viruses, and chemicals to the cells or wash the cells and discard the waste. Moreover, they can be employed to manipulate the cells mechanically or electrically.

The reported multiorgan microfluidic device includes three separate compartments involving the liver, cardiomyocyte, and skeletal muscle cells. This immune system-on-a-chip platform features monocytes as representative of the immune system which circulate through the three compartments of the system.

“The introduction of a recirculating immune component in a human-on-a-chip platform allows this system to monitor complex cell behavior and tissue–immune cell interactions in response to drug treatment.”

This proposed microfluidic platform holds key advantages as a drug toxicity screening platform. It is capable of monitoring intricate cell behaviors and complex immune system responses cytokines and signal molecules. “Another advantage of this multiorgan, microphysiological system is that it more accurately mimics in vivo conditions when compared to static monocultures (e.g., circulation, cell–cell interactions, and defined medium conditions).”

This multiorgan human on a chip was used for investigating the THP-1 cells (a cell line for modeling monocytes) response to cytokines and signaling molecules produced by tissues that directly or indirectly activate monocytes. Although the chips were tested with THP-1 cells, they can be modified to encompass other immune system components such either in isolation or in combination with other cells.

Discover the advancements of the microfluidics approaches for recapitulating the brain function on brain-on-chip devices.

In a liver-on-a-chip, a highly controlled cell culture environment is employed for drug toxicity screening and metabolism analysis.