Posted at 18:17h in Latest Research by Pouriya Bayat

As microfluidic devices get more complicated, the need for integration with automatic control and readout devices increases. This is further emphasized in point-of-care applications where, ideally, the device operates with minimal reagent handling and supervision and does not require highly trained personnel. One of the procedures that is oftentimes required for the detection of pathogens in point-of-care settings is nucleic acid amplification. Although various non-isothermal and isothermal methods have been developed for amplifying nucleic acids, Polymerase Chain Reaction (PCR) is still one of the widely employed methods. However, integration of the nonisothermal methods such as PCR into microfluidic chips imposes technical challenges due to the need for rapid temperature changes.

In a recent study published in Nature Microsystems and Nanoengineering, researchers have fused microfluidics with MEMS to come up with a microfluidic microarray platform for DNA quantification and multiplex testing. This highly integrated microfluidic technology is capable of performing rapid thermal cycling and real-time fluorescent measurement without any need for an external fluid delivery system.

“We report on the development of a microfluidic multiplexing technology for highly parallelized sample analysis via quantitative polymerase chain reaction (PCR) in an array of 96 nanoliter-scale microcavities made from silicon. This PCR array technology features fully automatable aliquoting microfluidics, a robust sample compartmentalization up to temperatures of 95 °C, and an application-specific prestorage of reagents within the 25 nl microcavities.”, the authors elaborated.

The proposed microfabricated chip consists of the following elements as shown in the above figure:

– A microfluidic capillary compartment to deliver the samples, followed by a sealant, to the test section
– A microcavity array on a silicon substrate – where the target-specific primers, probes, or template DNA gets immobilized – bonded to a polycarbonate cartridge (See microfabrication materials)
– A thermal interface for rapid thermal cycling change using a Peltier cell
– An optical component for real-time fluorescent read-out 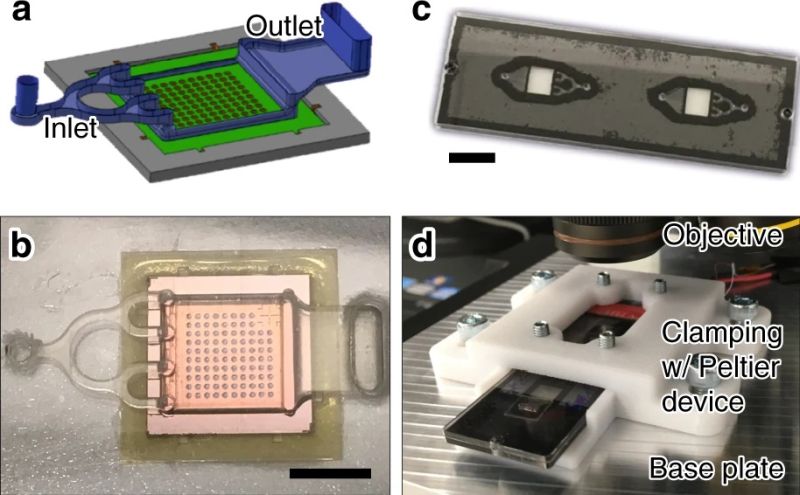 “From our point of view, the used hybrid silicon–polymer approach is a key to combine the best of both worlds: a microcavity array chip made from silicon, on the one hand, featuring a metal-like heat conductivity for a rapid and spatially homogeneous thermal cycling of the reaction compartments, tailored wetting properties for a capillary-assisted, fully automatable, and temperature-stable microfluidic aliquoting of the sample liquid, a high fabrication accuracy to provide reaction compartments with a precisely defined volume, no significant self-fluorescence for precise fluorometric qPCR measurements, and an inert surface that facilitates miniaturized biochemical reactions.”, the authors explained.