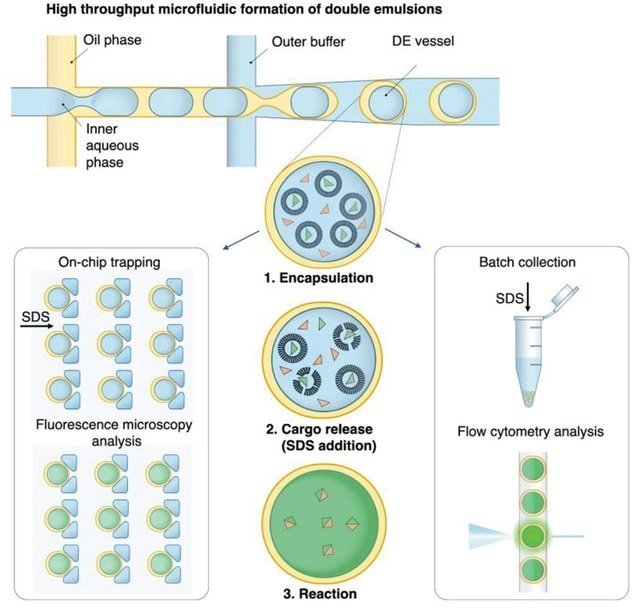 Posted at 19:02h in Latest Research by Pouriya Bayat

Droplet-based microfluidics is one of the most promising areas of microfluidics that is now quite established for a wide range of applications such as microfluidic single-cell analysis, directed evolution, microparticle synthesis, etc. Double emulsions (DEs) have enhanced the droplet microfluidic toolbox by allowing single emulsions to be encapsulated within another shell. The core-shell structure of the double emulsions isolates the reagents within the inner core and can be leveraged for controlled high-throughput cell screening, enzyme engineering, or drug discovery. Here, a novel method is developed to further advance the applicability of the double emulsions for more sophisticated experiments by regulating the transport of the reactants to double emulsions on-demand. In their recent paper published in Small, a research group at ETH Zurich, report the formation of lipid vesicles as reactant carriers within a double emulsion that can release their cargo in response to an external trigger.

“In this work, we present a novel versatile technique for the synchronized and time-controlled reagent delivery into DE vessels. Unlike previously developed techniques, this method allows us to address all DEs simultaneously at any desired time point. We employ large unilamellar vesicles (LUVs or liposomes) as tight carriers for compounds, encapsulated in DE vessels. The addition of sodium dodecyl sulfate (SDS), which can permeate across the thin oil shell of the double emulsion, causes the solubilization of the liposome membrane and subsequent cargo release.”, the authors explained.

The double emulsions are generated using a microfluidic device made with PDMS with four inlets and an outlet. The outer aqueous phase (OA) is introduced through the outermost inlet while the oil is delivered through the middle inlet. The other two inlets are used for the inner aqueous (IA) phases. All the microfluidic channels in the double emulsion generator device have a height of 11 µm and got bonded to a PDMS coated glass slide. The oil and the inner aqueous phases meet at the first junction where the inner core is made and transferred to the second junction to get encapsulated within the outer aqueous phase. The surface of the microchannels is modified to ensure uniform double emulsion formation. Upon formation, the double emulsions were introduced to a trapping microfluidic device. The trapping device was composed of a fluidic layer and a pressure layer separated by a thin PDMS membrane. The fluidic layer contained 614 hydrodynamic traps to trap the double emulsions while the pressure layer contained circular microchannels serving as pressure valves.

“We are convinced that the technique can be tuned for many applications beyond the scope of the presented assays (e.g., chemical synthesis, antibiotic susceptibility testing, and optimization of microbial biosynthesis). In particular, the possibility of phenotype–genotype linkage provided by the encapsulation of the reaction in double emulsions and the compatibility with high-throughput flow cytometric analysis make this technique particularly suited to in-vivo- or in-vitro-directed evolution.”, the authors concluded.