Posted at 14:10h in Latest Research by Pouriya Bayat

Traumatic brain injury (TBI) occurs when the head experiences a violent hit and can cause disruption in regular brain activity1. Similar to many other diseases, early diagnosis of TBI can prevent progression towards irreversible damages. This is further highlighted in patients with unclear or minor symptoms which can remain undiagnosed. Blood biomarkers, such as exosomes released from an injured central nervous system tissue into the bloodstream, can potentially be used for an early diagnosis. Microfluidics technology has shown promising results over the past few years as an ideal candidate for exosome detection and therefore could be employed for this matter. (Read more about microfluidic methods for exosome separation here).

Duke University researchers have demonstrated a microfluidic chip that employs an acoustofluidic sorting method to isolate exosomes for the detection of traumatic brain injury.

“In this work, we further investigated whether the advantages of our acoustofluidic device can enable the early diagnosis of TBI based on biomarkers found in circulating exosomes. To simulate the neuropathology of TBI, we collected blood in a well-characterized rodent model of closed-head injury. By using acoustofluidics to isolate exosomes from mouse plasma samples and analyzing the abundance of glial fibrillary acidic protein (GFAP), we associated an exosomal biomarker for TBI with reactive astrocytes responding to brain injuries.”, the authors elaborated. 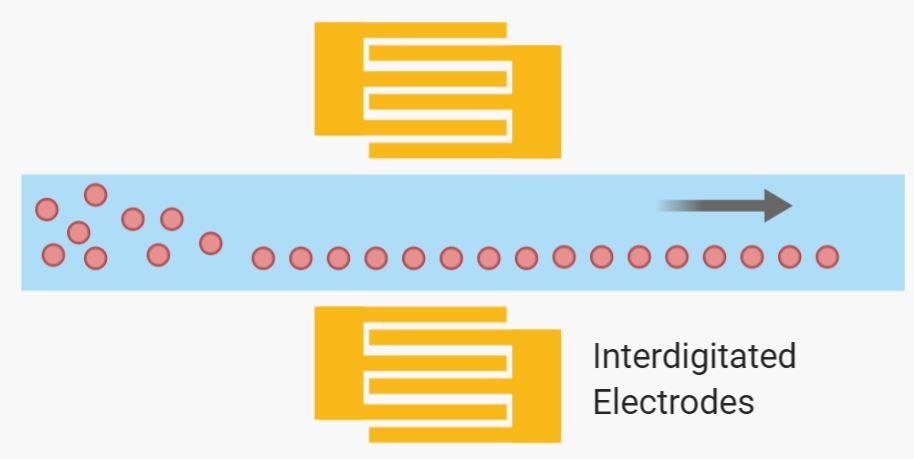 The microfluidic device was made of PDMS and consisted of a microchannel that was 100 µm high and 800 µm wide. Two pairs of tilted-angle interdigital transducers (IDT) were placed close to the microchannel to generate surface acoustic waves (SAW). These cells, exosomes, and other vesicles that pass through the microfluidic chip experience an acoustic force as a result of these surface acoustic waves. This amount of this force is dependant on the size of the particle and therefore can be used for size-based separation. As seen below, the murine blood samples (as an animal model) were introduced through the microfluidic device where two separation modules separated cells/platelets and large vesicles from exosomes, respectively. The separation was based on the forces exerted on the cells by the IDTs around the microchannels.

The microfluidic chip was shown to be capable of isolating TBI-related exosomes from blood samples confirmed by flow cytometry.

“Compared with conventional exosome isolation methods, including ultracentrifugation and antibody capture, acoustofluidic separation is more rapid, biocompatible, efficient (higher yield), low-cost, and much easier to handle and integrate with downstream analysis. Moreover, this approach may be used to identify new therapeutic targets designed to reduce excitotoxicity, neuroinflammation, and secondary tissue injury due to intracranial hypertension, as well as serve as a clinical surrogate in early clinical trials.”, the authors concluded.